Home International Sainz takes control in the heat, Loeb suffers in the sand 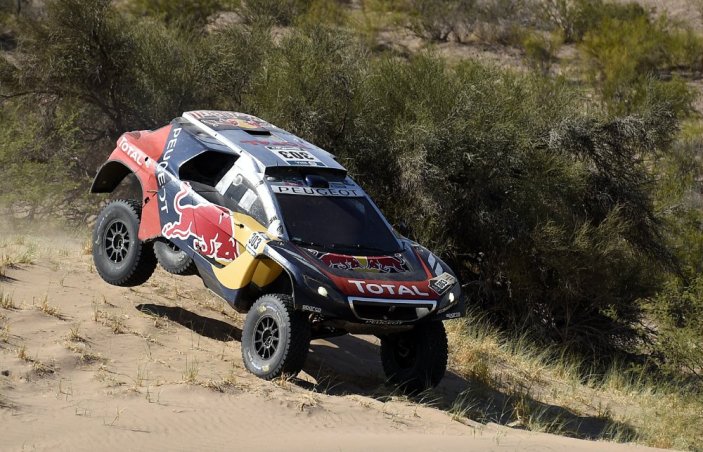 Carlos Sainz moved atop the overall standings of the Dakar Rally in winning Tuesday’s ninth stage as Sebastien Loeb fell further behind after struggling in sandy conditions.

The stage around Belen was cut short because of searing heat and the many difficulties encountered by competitors between Belen and Fiambala.

For the motorbikes the stage was halted after 179km of the day’s planned 436km run with the riders continuing on in convoy to the finish line, apart from some 30 competitors who had already reached that point.

For cars the race was also shortened to the 179km mark, of the planned 396km, of which 285km were timed. Temperatures were between 37 and 40 degrees celsius (98-104 degrees fahrenheit).

Spanish veteran Sainz, driving a Peugeot, held off the Minis of Erik van Loon and Mikko Hirvonen by 10 and 17sec respectively.

“It was a very demanding course, physically speaking, with a lot of off-road, navigation and vegetation,” said Sainz.

“It was very hot,” the 2010 winner added shortly after being cooled down with blocks of ice.

Stephane Peterhansel, who finished 9:12 behind Peugeot teammate Sainz, lost the command of the overall standings to the Spaniard, the latter now leading the Frenchman by 7:03.

After rolling his Peugeot on Monday, Loeb struggled in the dunes, becoming stuck in the sand on several occasions.

“It was very tough and very sandy in places,” Loeb said. “We wanted to try to follow the roadbook closely so as not to get lost.

“In the end, there were some spots we couldn’t pass. The sand is so soft, we got stuck several times.

“It’s a bit depressing, but it’s a learning process.”

After the arrival of just 10 motorbikes at the finish line, Australian KTM rider Toby Price, the overall race leader, had clocked the fastest time of 3hr 55min 51sec.

But organisers could decide to recalculate the times at the 179km mark where Price also had the best time.

There was more drama for departing French competitor Lionel Baud.

On Saturday’s stage seven, Baud hit and killed a 63-year-old Bolivian shepherd, an accident that saw the tearful Frenchman withdraw from the gruelling event.

But on Tuesday a convoy leading Baud’s car back to Buenos Aires was hit by a goods lorry in an accident also involving four other vehicles, the Cadena 3 television station reported.

An Argentinian car driver was reported killed in the accident.

Wednesday’s 10th stage is from Belen to La Rioja, with similarly hot temperatures predicted and the notorious Fiambala dunes to be negotiated. – Agence France-Presse