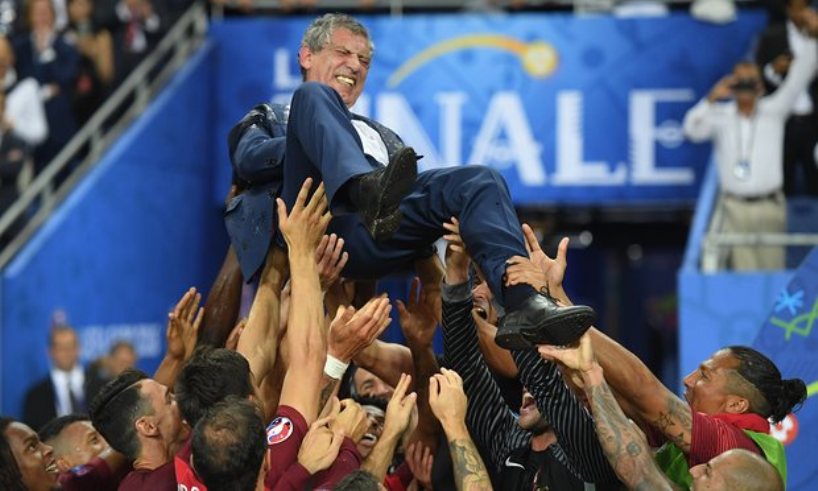 Portugal coach Fernando Santos said he did not mind how his team won and they claimed the European Championship title on Sunday with another “ugly” victory.

Santos hugged his injured star player Cristiano Ronaldo when the Stade de France spectacle finally ended after 120 minutes. But in the end it was not goals from Ronaldo that decided the contest but Santos’ wily tactics that paid off.

Portugal were under pressure most of the game but again stole it from hosts France at the crucial moment. Eder’s extra-time shot killed off French hopes.

Santos said he believed from the first day of the tournament that Portugal would be in the final. The 2-0 win over Wales in the semi-final was their only victory in 90 minutes of regulation time in seven games at the tournament.

The 61-year-old coach said Portugal were the “ugly duckling” side.

“Would I like us to be pretty? Yes,” said Santos after the quarter-final win over Croatia, also in extra-time. “But in between being pretty and being at home, or ugly and being here, I prefer to be ugly.”

After Denmark beat Germany in 1992 and Greece beat Portugal in Lisbon in 2004, the Portuguese have now pulled off an almighty shock under Santos’ guidance.

Ronaldo’s threat had grown with each match at the European Championship and his enforced injury departure from the final was a new blow.

But as with earlier games, Portugal weathered the storm and came out stronger.

Santos, who built his career with top clubs in Portugal — Benfica, Sporting Lisbon and Porto — and in Greece as well as the Greek national side, said Sunday’s final “will be the high point of my career.”

“It is my country, my flag, my fatherland, so from a personal point of view it is very important for me,” he said of the achievement of reaching the Euro showdown.

Santos has dramatically changed Portugal’s luck and outlook since taking over as coach in September 2014.

Portugal had lost their first Euro 2016 qualifying game 1-0 to Albania.

Santos took over in controversial circumstances, facing an eight-match touchline ban after being sent off when managing Greece at the 2014 World Cup.

He was accused of verbally abusing Australian referee Ben Williams when Costa Rica beat his side.

Appeals to FIFA and the Court of Arbitration for Sportsaw the ban cut to two matches, with two suspended.

Santos’s luck has stayed with him. And he has also found the right way to build a team around a genius like Ronaldo. The country won seven straight competitive matches to win their qualifying group.

He has taken the burden off Ronaldo’s shoulders in a way that eminent predecessors like Paulo Bento, Carlos Queiroz and Luis Felipe Scolari could not.

Ronaldo, three-time world player of the year, and owner of a truckful of football records, now has a chance to win his first major international trophy.

Portugal drew against Iceland, Austria and Hungary in Group F and needed an extra-time goal to beat Croatia in the last 16.

The team were criticised. But Santos shrugged it off. When Ronaldo does not perform then the likes of Ricardo Quaresma, Nani, Pepe and now teenager Renato Sanches can stand in. If it takes an ugly win then so be it.

“I have always seen Portugal as a team. Sometimes we have played better than the others, but I think the match against Croatia was of strategic importance,” he said.

Ronaldo finally produced a classic performance in the 2-0 win over Wales, scoring one goal and making one for Nani.

Santos may be inspired by Greece.

Greece beat Portugal on home territory in the final of the 2004 Euro — and reduced Ronaldo to tears.

And Santos inspired a Greece team short on individual talent to the knockout rounds at Euro 2012 and the 2014 World Cup. They were already great achievements.

“Two years ago we set the target to get here,” Santos said before the final.

“We told each other that we had to do our utmost to get to France and reach this final. We have worked like crazy to get here. Now we have a final to play and you know that a final is not played, it is won.” – Agence France-Presse