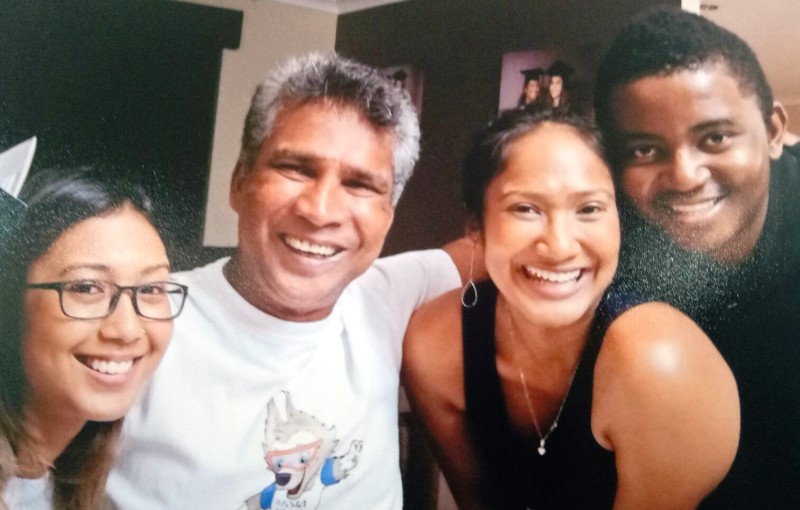 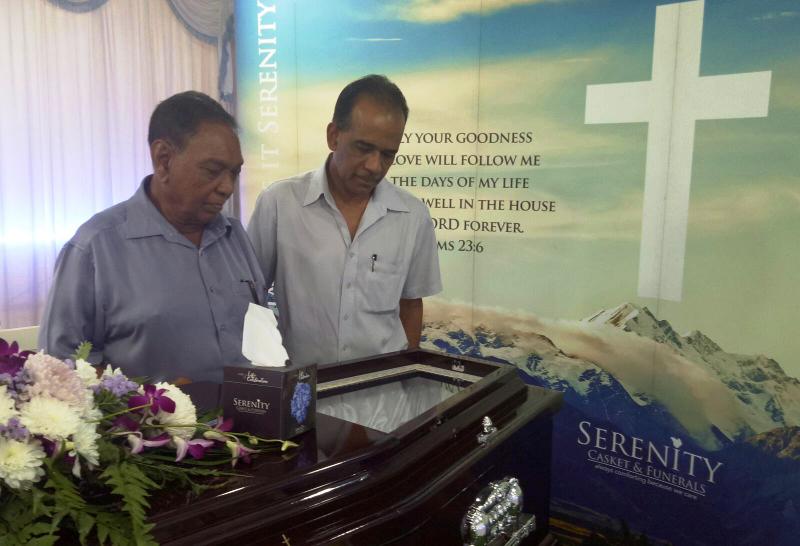 AT the void-deck wake of the late Rick Varatharju, at Block 658, Hougang Avenue 8, his family laid out his most nostalgic memories, from sports to family lifestyles, holidays and birthdays, photographs and party-moments – summing up an entire existence over 57 years to fondly remember him by.

The hundreds who strode to pay their respects over two days felt an unusual bonding with a much-adored Singapore footballer, who lost his fight to lung cancer on September 14 at the Singapore General Hospital. A terminal disease he kept a family secret as he knew his days were numbered and he didn’t want it to be a talking point.

The nicely-decorated flowers and mini-family portraits at every table poignantly showed what a wonderful father, relative and friend he was. The decoration of umpteen photographs, some in super-size on A4 paper and blu-tacked on the multiple walls on every bit of wall the family could find, perfectly reminded of so much happiness in so many places and the same “photo smile” with Rick in each.

The photo albums lying around on tables for guests at a loose end had the touch of class. Plus candles and fairy lights to create a nocturnal sensation as the evening prayers started. What also caught my eye were the multiple videos which constantly played during the wake or the visitation of the high-points of Rick’s happy-go-lucky life.

I particularly adored Rick’s startling red Singapore football suit, he wore with pride when he played for the Lions (nickname of the national football team) in the 1980s as an outstanding no-holds-barred defender, who was respected by his team-mates and feared by his rivals. But I was surprised at the white golf bag by the side of the coffin, not knowing that he enjoyed golf and played to a decent 16-18 handicap.

The light music was simply adorable, too, as they played brilliantly slow and soulful, atmospheric songs that gave it a spiritual and emotional best can be close to miraculous.

In a nutshell, the Varatharju family of wife Juliann Rick and daughters Audrey and Amanda, offered a close-to-perfect farewell and on September 19, his body will be specially flown to Perth, Australia, for burial where his two daughters have found their new home and want to perpetually remember their late father. 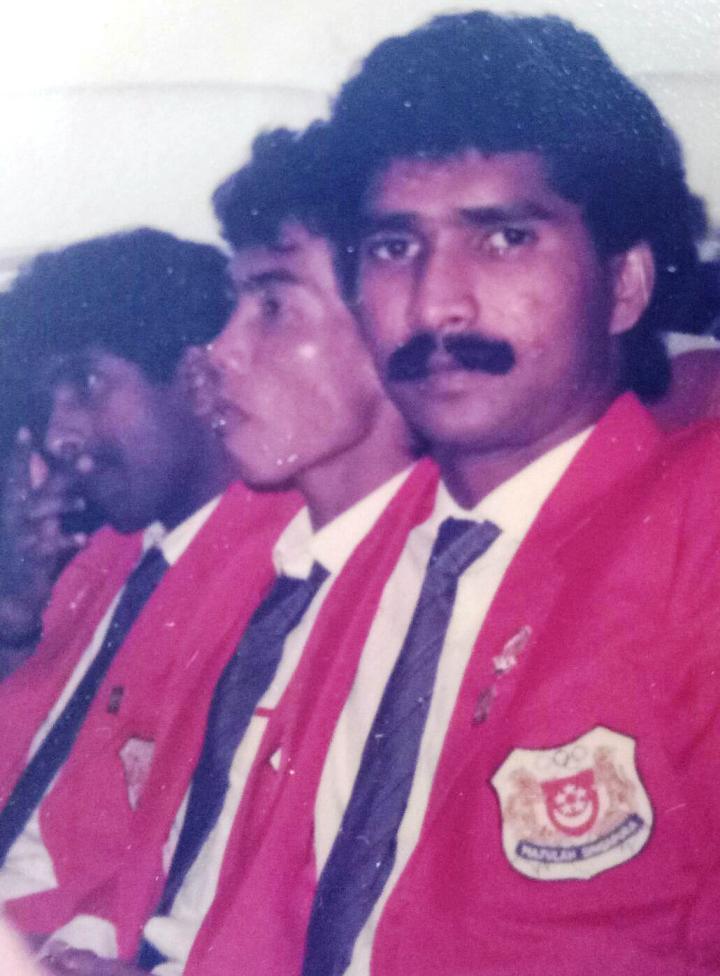 And, most importantly, for family and friends, there’s a time for sharing memories and telling stories about the beloved Rick, which can be the beginning of, especially for the family, acknowledging that he bravely fought cancer until his last breath. And there are many wonderful memories that we have of him that tell us who he was over 57 years. So, the storytelling at the wake and even during burial is really an important part of that.

I felt at the wake a very intense, extraordinary, moving, memorable, vital, passion-filled day of celebration and remembrance. In my mind, the two-day wake for the family and community to begin the process of letting go of Rick, of journeying him in death to the place of his overseas burial in Perth, Western Australia. I felt solemnly that it was a structured interlude between death and the funeral, as much as my beloved wife died five years ago of breast-cancer and I laid her to rest in Banjarbaru, Kalimantan, her hometown.

Former award-winning national coach Jita Singh said the wake atmosphere truly reflected Rick’s cheerful personality as he was a “kind, caring and larger than life character…a real blast to be around”. He said: “Goodbyes are often hard to say, they hurt so very much. Though you’re not gone, you still remain in the minds, hearts, and lives you’ve touched.”

Jita, who won the SNOC ‘Coach of the Year 1981’ and S-League ‘Coach of the Year’ 1998, never handled Rick, who played primarily for the Intermediates (second national team) and also for leading clubs like Tampines Rovers, Geylang International, Pioneer Arsenal and Telok Kurau. But he confessed he was “gutted at his passing…and I’m glad he’s not suffering anymore from Stage 4 lung-cancer”. He added: “I will remember him for what his family and friends adore as the life and soul of any party and not to forget the happy football times.” 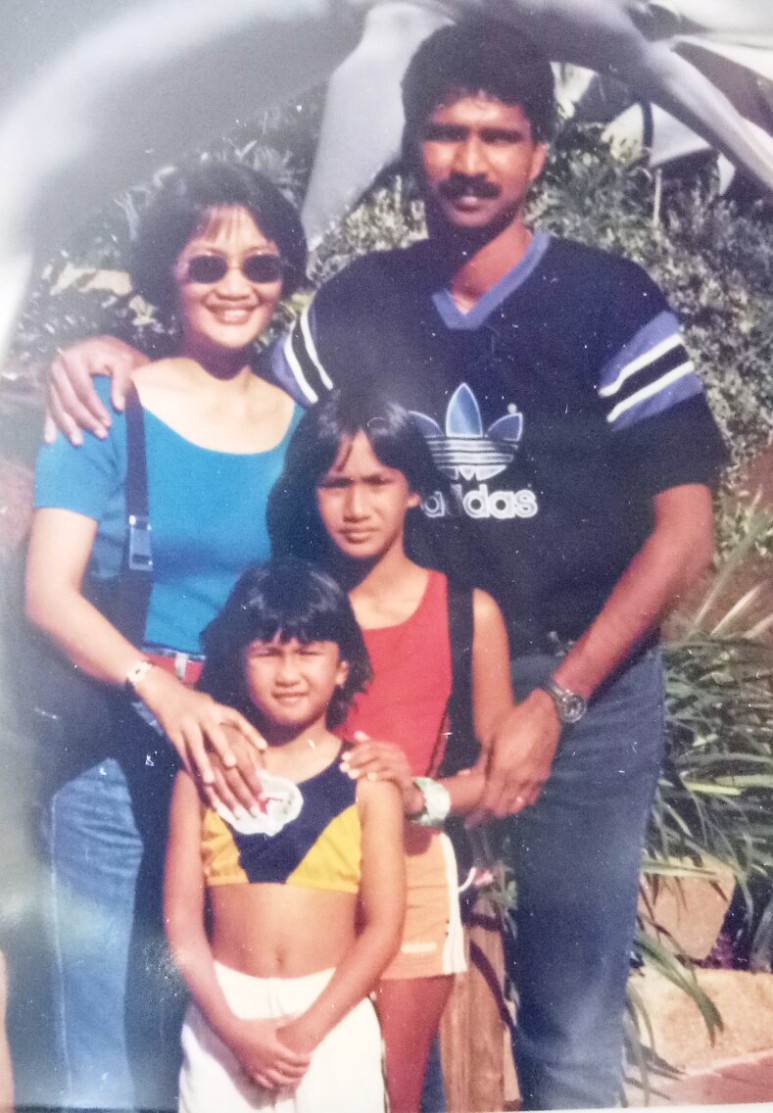 Football Association of Singapore (FAS) Council Member and former international goalkeeper Yakob Hashim, who played in the 1986 Asian Cup qualifiers, said: “Rick is simply awesome. He’s a tower of strength in defence, first, for our Youth team, when we played in the 1980s and then the Intermediates. He’s someone who will protect the team if any unwarranted commotions happen at the back and he will get more aggressive in protecting his colleagues. He’s jolly good and liked by all his players and officials especially for being very helpful and being a gentleman off the field. We’re going to miss him.”

Singapore Intermediates coach in the 1980s P.N. Sivaji, now a technical director with Myanmar-based professional club Hantharwardy United, said: “Ricky as a young footballer was well known for his aerial prowess and his crunching tackles. He had a strong positive mentality and he was the type of man who was always willing to face adversity rather than run away from it.

“He played for Singapore Indians FC and the National Intermediates in the late 80s and early 90s. He was fearless but almost always had respect for authority. I remember some local referees who having known of Ricky’s over exuberance on the field, having a word with him before kick-off, reminding him to be in control of his emotions. Rick almost always responded positively to the words of advice. I’m very saddened to hear of his passing. I’m not surprised that despite knowing of his medical condition prior to his demise, he faced each day with a very positive mind set.”

Former Australian-born Malaysia Cup hero Abbas Saad, now based in Sydney, who played in the Malaysian League for Johor and Singapore in the early 1990s, and won the League and Malaysia Cup “double” with both Johor in 1991 and Singapore in 1994, described Rick as a “great servant to the game and for his country, super player and a great guy well liked by his peers…may he rest in peace”.

Richard Wong, the Singapore Ex-Internationals team manager, remembers Rick as “one of the favourites of Hussein Aljunied (the late former national coach)…they got on very well. In my books, he’s a very nice guy off the football pitch, kind hearted and thoroughly enjoyed his nocturnal drinks”. 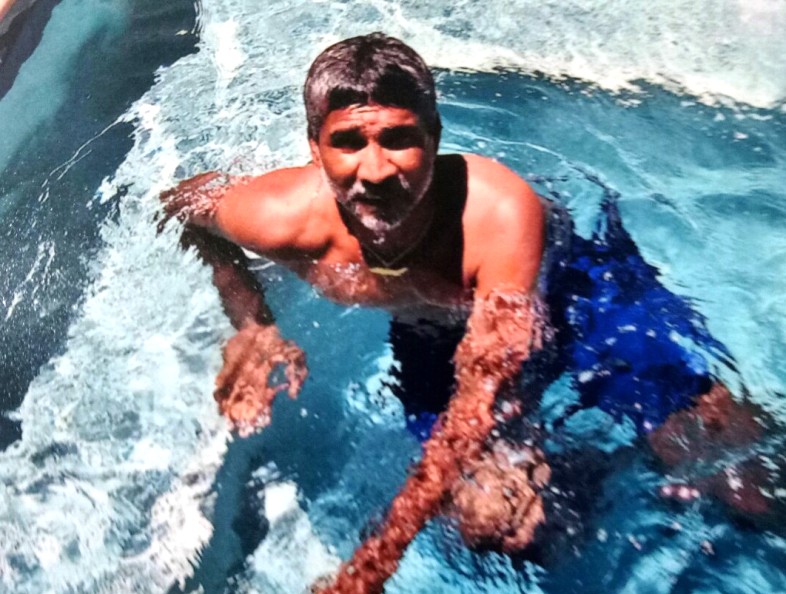 My best personal memories of Rick was when we did the fortnight-long Asian Football Confederation (AFC) ‘C’ Licence Course, two decades ago, together with celebrity footballers like Quah Kim Song, Ho Kwang Hock, Rafi Ali and (the late) Amin Nasir. I found him to be incredibly optimistic and high on life. He’s usually branded as peppy and knows how to make the best out of every situation, especially when the sun goes down! But believe me, he’s really fun to be around and can brighten anyone’s day. In a nutshell, I’d sum up Rick as very likeable and someone who genuinely likes engaging with people. He’s always a very extrovert, gregarious, bubbly kind of guy who likes to talk.

Former Singapore Indian Association (SIA) Chairman, Board of Games Ravi Krishnan quotes the words of ex-world boxing champion (the late) Muhammad Ali in summing up Rick, who he had known for four decades. He said: “Friendship is the hardest thing in the world to explain. It’s not something you learn in school. But if you haven’t learned the meaning of friendship, you really haven’t learned anything.”

Ricky’s knee-jerk encounters with referees and the fireworks-like reactions are close to legendary as the men-in-black can’t forget his sometimes annoying on-the-field antics. But former FIFA referee T. Rajamanickam, who probably lost count to the number of cards (yellow and red) he flashed to Rick, over three decades of competitive football, hails him as a “very talented player”.

He adds: “But as much as he’s very competitive, he can be a very rough player with his outrageous tackles which never fails to instill fear in the opponents. Overall, I’ll say he is decent man when he doesn’t get angry.  I refereed many of his matches and always advice him to watch the way he plays in defence as an over-robust defender.” 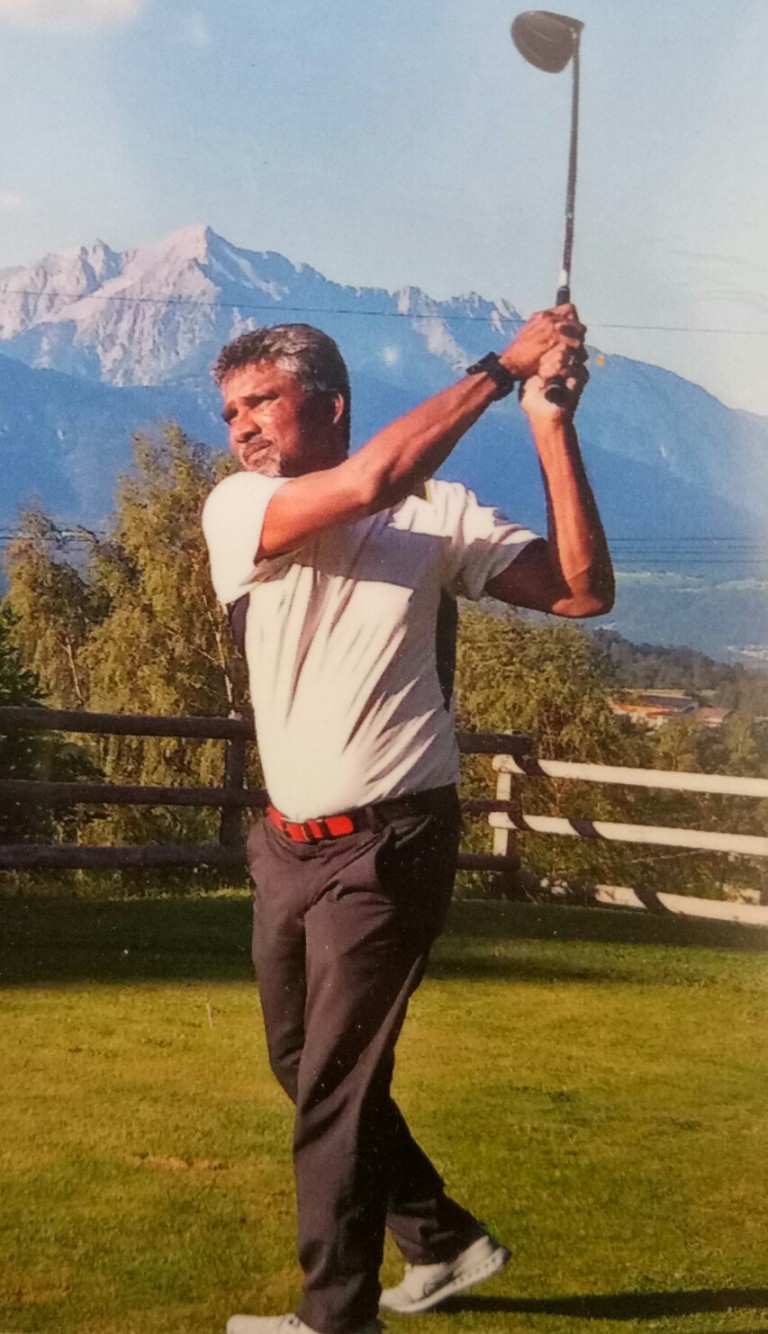 Former Malaysia Cup defender Jayaram Masilamani, who played in the 1980s, and now indulges in high-end golf at Orchid Country Club in Yishun, praises Rick as a “hardworking golfer who plays to a 16-18 handicap”. He says: “He’s very calm on the golf course as he trains diligently in the mornings and compared to football, where he’s known for his rough-house tactics, he finds an extraordinary calm in handling the golf clubs. He drives the long balls well and if there’s a little fault to improve, he has to buck up on his short-game.

“But overall, Rick, who I visited recently in hospital, is like a sporting ‘Jekyll-Hyde’ personality whose moral character is extremely different from the football field to the golf course. He probably gets extra-tense in football as he protects his team-mates and then gets into the referee’s books umpteen times. But over golf, he’s such a cool, calm player and uses golf to unwind and to relax. I’m shocked and saddened by his untimely death.”

As I remember my late cancer-stricken wife, Amda Latul-Nair, I would like Rick, too, to be remembered for the positive impact he has made on the world, for fun times and for his adorable relationships with others, not as a loser. In my view, like my wife, he has defied the prognosis for severe type of cancer and yet achieved a great deal in life.

I can feel Rick’s silent words up there, as much as Amda, that they do not want to feel a failure about something beyond their control. I refuse to believe their deaths can be attributed because they didn’t battle hard enough. And that’s the problem: The language used around cancer seems to revolve around wartime rhetoric: Battle, fight, warrior, beat. While Rick and Amda recognise that these violent words may help others on their journey with cancer, as someone who is never going to win their battle with this disease, they may well find them uncomfortable and frustrating to hear.

I clearly remember Amda’s prophetic words before she passed on December 8 2013 (my birthday!) that instead of reaching for the traditional battle language, (life) is about living as well as possible, coping, acceptance, gentle positivity, setting short-term, achievable goals, and drawing on support from those closest to you. 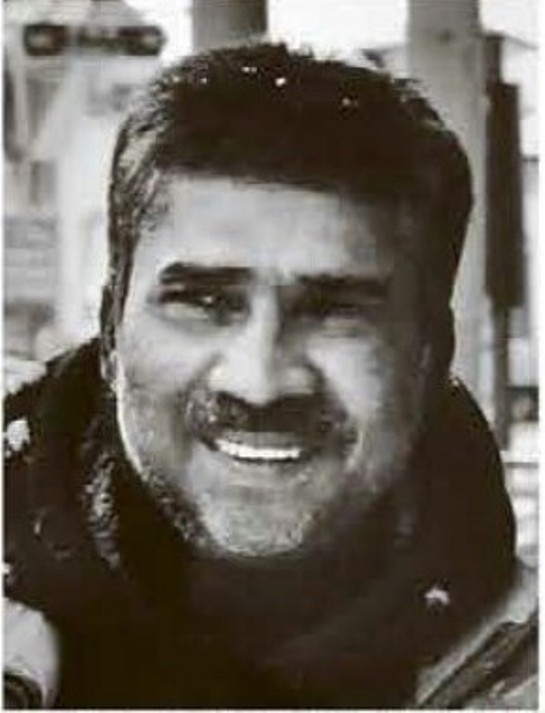 Rest in Peace, my friend Rick.

You’re very close to a final homecoming when wife, Juliann, and daughters Audrey and Amanda, offer the close-to-perfect farewell when you’re nicely laid to rest in Perth, Australia. It will be the ultimate Varatharju reunion for a long, long time to come. – By SURESH NAIR