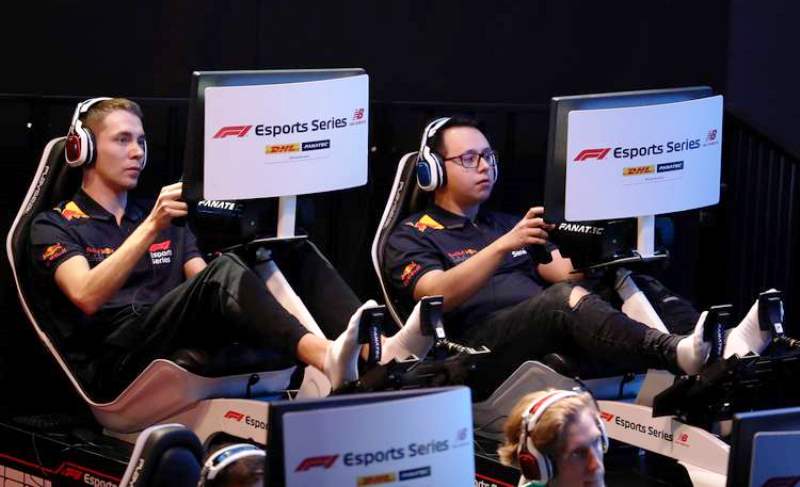 Our four-man Red Bull Racing Esport Team battled for 12 hours at Sebring to bring home the win in the GTE series after clever pit stops saw them out-strategize their opposition.

The quartet of Sebastian Job, Patrick Holzmann, Graham Carroll and Frede Rasmussen were racing in the GTE series and began the race second on the grid, behind Team Redline Black, who started on pole.
The Team’s strategy was to pit after every 30 laps, which meant the entire race would ebb and flow in terms of positioning for the Bulls. They also had the tactic of fuel saving, at times, a decision which was made around the half-way mark of the race, so pit stops would be shorter.
After an early pit stop in the race, the Team found themselves down in fourth behind Redline Black, Williams Esports BenQ, and Core Simracing. Sebastian was on the track with fresh tyres and pulled off a spectacular lap, taking the Core car on the inside and then hunting down the BenQ, both on very worn tyres, which he was able to pass along the start/finish straight to take P2.
An hour later in the race Patrick was behind the wheel and chasing down the Redline car. He was getting quicker and quicker and was able to take more than 1.5s off his lap time. He managed to make up four seconds on Redline, due to them suffering from hardware issues, and was able to push them off the Apex and take the race lead.
Due to both teams having similar pit tactics it became a battle for first between Red Bull Racing Esports and Team Redline Black. With just 52 minutes remaining, Sebastian was out on track with fresh tyres sitting in second – 50s off the leader – but in the knowledge that the Redline car, being driven by Max Benecke, had to pit again.
Redline pitted for fuel, decided not to change driver or tyres and when Benecke pulled back onto the track, after their 34.8s stop, he still had the lead although Sebastian was right on his bumper. Benecke was able to hold him off for a lap, before making a tiny mistake which Sebastian jumped on to take the lead with 48 minutes of racing remaining, plus with fresher tyres, he was able to pull away from his rival.
When Sebastian took the chequered flag, he was more than 26 seconds in front of his rival. “It was a bit of a surprise, none of us expected to get the win,” said Sebastian after the endurance race. “About four hours into the race we noticed that Redline weren’t saving fuel on laps, and we were. I kept thinking they would start, but they never did. It was an odd decision in my eyes, but I’m not going to complain. I was unsure how it was going to end up, but it went well. It was nice to get the win and hopefully we’ll get a few more this season,” concluded Sebastian.
12 HOURS OF SEBRING RACE RESULTS