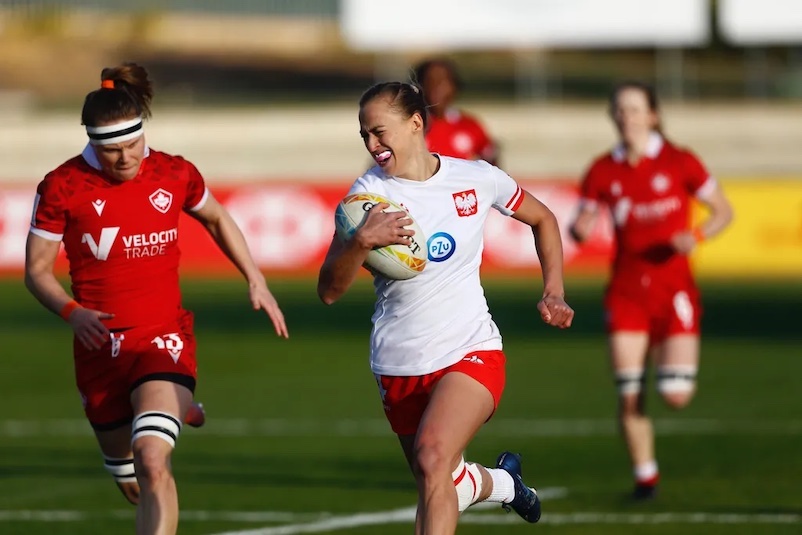 In the men’s tournament, South Africa win 27th consecutive game to set up semi-final against Australia

Inexperienced England knock out France to reach last four, where they face Argentina

The inaugural HSBC Spain Sevens served up a treat on day two, with dominant displays, major upsets and individual masterclasses on show at the Stadium Ciudad de Málaga.

South Africa’s men moved towards a fifth consecutive HSBC World Rugby Sevens Series title by reaching the semi-final with a perfect record, extending their winning streak to 27 in a row.

New Zealand are now the only team to have done better, and their record of 47 straight wins from 2007/08 remains a daunting feat to match.

The Blitzboks face Australia in Sunday’s semi-final, while England and Argentina meet on the other side of the draw after knocking out France and Ireland respectively.

In the women’s tournament, favourites Australia reached the semi-finals with a record-setting 15th consecutive victory to set up a clash with Russia, while France and USA face off in the other semi after enjoying perfect records so far in Málaga.

The Russians had to get past surprise package Poland, who became the first invitational team since China in April 2018 to reach the quarter-final stages, thanks to a shock pool victory over Canada.

Earlier in the day fellow invitational teams Belgium women and Germany men also secured impressive victories against core Series teams Brazil and Japan respectively, demonstrating the strength in depth that is growing among emerging nations in rugby sevens, following an outstanding Olympic competition for the sport in Tokyo last year.

Sunday will see the medals decided in Malaga and the action begins at 10:00 local time (GMT +1) with two Women’s fifth-placed semi-finals, as England face Ireland and Canada get the chance for revenge against Poland.

But the top prize is at stake at 10:44, when USA take on France in the first of the Women’s Cup semi-finals, followed by Russia’s clash with Australia at 11:06.

The women’s ninth-place playoff and the men’s placement semi-finals follow, whetting the appetite for the first men’s Cup semi-final between South Africa and Australia at 14:09.

England then face Argentina at 14:31, followed by a series of play-off finals.

Finally, the women’s champion will be decided in the Cup final at 18:26, before the men’s Cup final concludes the weekend’s action at 18:56.