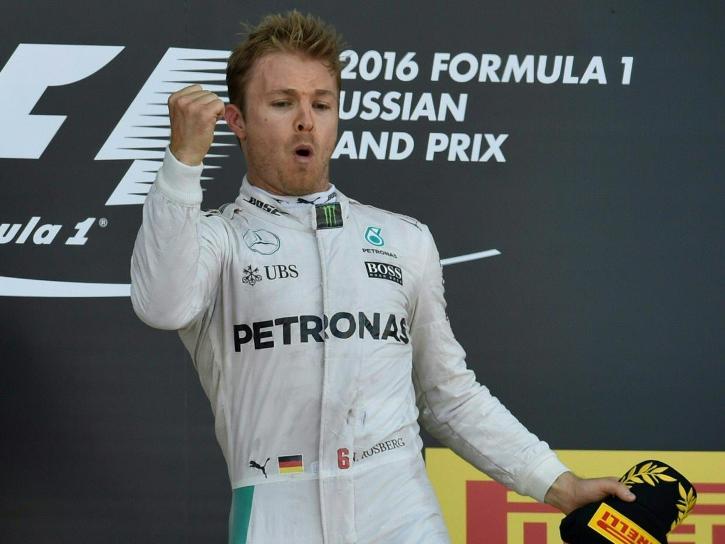 Nico Rosberg became only the fourth driver in Formula One history to record seven successive wins when he cruised to victory ahead of Mercedes team-mate Lewis Hamilton in Sunday’s incident-filled Russian Grand Prix.

The 30-year-old German started from pole and produced an imperious performance as he pulled clear of the field to take his fourth win of the 2016 season and the 18th of his career.

He won the final three races of 2015 and is now unbeaten since defending three time world champion Hamilton triumphed in last year’s United States Grand Prix to secure the championship.

The only three men to have reeled off seven straight wins were Italian Alberto Ascari and Germans Michael Schumacher and Sebastian Vettel, whose race on Sunday was ended by a first lap accident.

Hamilton, who started 10th, avoided the carnage of a first lap multiple collision that eliminated Vettel to sear through the field and, briefly, threaten a challenge for the lead.

Hamilton’s race, however, was stymied by further mechanical problems.

He had suffered an engine failure in qualifying on Saturday and he was forced to nurse his Mercedes home 25 seconds behind the rampant Rosberg.

Finn Kimi Raikkonen finished third in the second Ferrari ahead of compatriot Valtteri Bottas and his Williams team-mate Felipe Massa.

Fernando Alonso came home a much-improved sixth for McLaren ahead of Kevin Magnussen of Renault, Romain Grosjean for Haas, Sergio Perez of Force India and 2009 champion Jenson Button who was 10th in the second McLaren.

Rosberg’s win increased his lead in the drivers championship to 43 points, ahead of Hamilton, after four of this year’s 21 races.

On a bright day on the shores of the Black Sea, with a track temperature of 41 degrees Celsius, the calm before the start was swiftly transformed into mayhem on the opening lap.

Rosberg made a near-perfect start, pulling clear from his 24th pole, but behind him cars collided in a dramatic incident that brought out the Safety Car before the race was a minute old.

The chief victim of the multiple accident was the luckless Vettel who for the second race in succession was hit by Daniil Kvyat, the Russian having collided with the German on the opening lap of the Chinese Grand Prix.

This time, after Raikkonen had swept past Bottas for second at the first corner, Red Bull’s Kvyat rammed into Vettel’s Ferrari twice, the second time sending him spinning off into the barriers at Turn Two with sufficient force to wreck his car and end his race.

There was no disguising the German’s anger as he delivered an expletive-strewn tirade over the Ferrari team radio while around him cars slithered and crashed amid flying debris.

After three laps for repairs and vehicle rescues, the Safety Car came in and racing resumed.

Rosberg pulled clear again and, behind him, Bottas jumped a dozy Raikkonen for second and Hamilton, who had taken advantage of his immediate rivals setbacks, snatched fourth from Massa and then, on lap seven, took third from Raikkonen.

Hamilton reeled off fastest laps and trimmed Rosberg’s advantage from more than 12 seconds down to eight, scything through the back-markers with an alacrity that thrilled the crowd.

Unfortunately, it was too much for his car’s power unit which, having been repaired and rebuilt overnight with the inclusion of a fuel unit flown from England to Russia by private jet, betrayed the strain.

“We have a water pressure issue, Lewis,” was the radio message after Hamilton had asked: “Are you there, Bono?” His reaction was silent, but easy to imagine.

Having fought so hard to cut Rosberg’s lead to seven seconds, he slowed and allowed it to extend to 13 again before he was told that the situation “had stabilised.”

By then, however, with 10 laps remaining, victory was unlikely and he settled for second. – Agence France-Presse