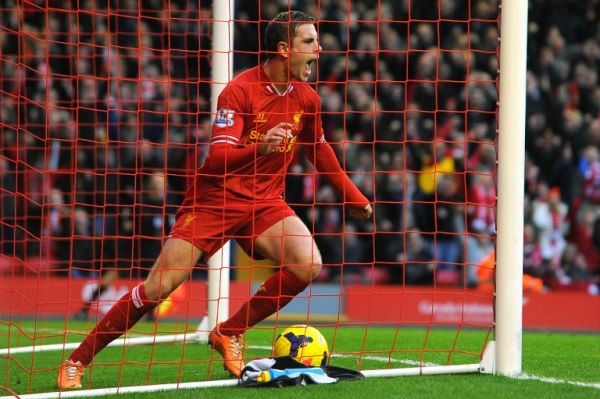 I DID IT: Liverpool’s Jordan Henderson celebrates scoring his team’s fourth goal in an English Premier League against Swansea. The Reds won 4-2. AFPpic

LIVERPOOL tightened their grip on fourth place in the Premier League after Daniel Sturridge and Jordan Henderson each scored twice in a jittery 4-3 win over Swansea City.

Swansea hit back to level from 2-0 and 3-2 down at Anfield, before Henderson finally killed off their resistance in the 74th minute to take Liverpool back to within four points of leaders Chelsea.

It was a 10th consecutive home league win for Liverpool.

Sturridge has now scored in eight consecutive Premier League games and he set up his side’s second goal in the 20th minute with a lay-off that was curled home by Henderson.

Sturridge restored Liverpool’s lead in the 36th minute, converting a cross from Luis Suarez with his head, but Bony equalised from the penalty spot early in the second half after he had been pulled back by Skrtel.

It had been a ramshackle performance by Liverpool, but they finally secured victory with 16 minutes remaining when Henderson bundled the ball home after Suarez’s shot was deflected into his path.

Tottenham Hotspur lost ground in the race for Champions League qualification as Norwich City boosted their hopes of Premier League survival with a 1-0 victory.

Robert Snodgrass claimed the decisive goal in the 47th minute at Carrow Road to give Norwich only a second win in 12 games and lift Chris Hughton’s side four points clear of the relegation zone.

Tottenham were bidding to return to within three points of fourth-place Liverpool, 4-3 victors against Swansea City, but instead were left six points below the Champions League berths in fifth place.

In the day’s other game, Loic Remy marked his return to the Newcastle United team after suspension by smashing home an injury-time winner in a 1-0 victory over Aston Villa.

The French striker collected a deflected effort by Luuk de Jong and beat Villa goalkeeper Brad Guzan in the 92nd minute to give Newcastle a first home win in five league games after a run of four straight defeats. 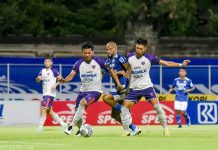