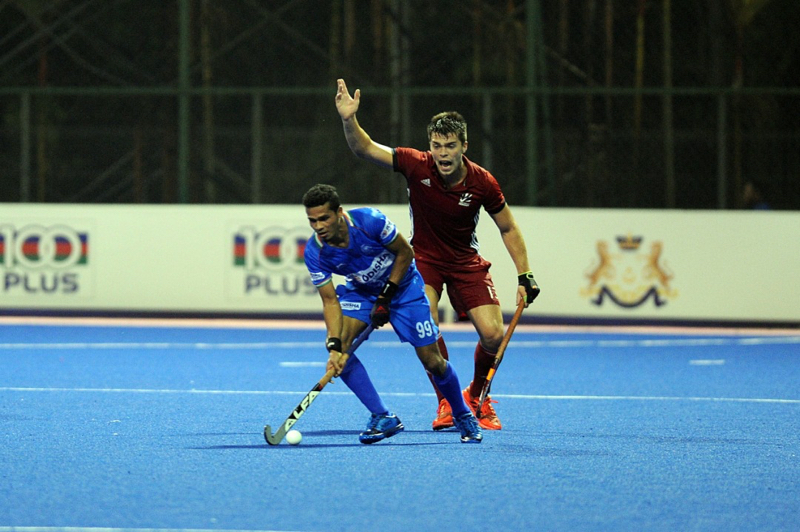 Dominant India paid a heavy price for their poor finishing as Great Britain staged a come-from-behind 2-1 win to retain the Sultan of Johor Cup in the six-nation Under-21 Invitational tournament on Saturday.

Britain thus became the first team to complete a grand hat-trick in the highly acclaimed FIH recognized tournament that was inaugurated in 2011.

The killer blow came 40 seconds before the hooter when Stuart Rushmere slotted home the winner for the title and break the Indian hearts on a night when India muffed chance after chance, especially in the first quarter.

India struck with their seventh penalty corner with Gursahibjit Singh getting his name onto the scoresheet.

However, a minute later it was all square when Rushmere drew Britain level with a first-timer and from there on it was anybody’s game but India was once again muffing the chances that came their way.

Britain grabbed their opportunity to add more pressure on the Indians each time the champions made forays into the Indian territory. And Rushmere made it count with his chance and rest is history.

“We paid the price for our poor finishing. Our poor finishing hit us hard. It was a tale of missed chances, especially in the first quarter. The players gave their best and I am happy with that,” said India coach B. J. Kariappa, adding India will be glad to come back next year.

His British counterpart Jon Bleby praised his bunch of fighters.

“We wrote history in the tournament as the first team to winning the title three times. It was a tough final but we took our chances well,” said Bleby after the win.

Malaysia finished third in the tournament with a 3-2 win over Japan in the playoff while Australia defeated New Zealand 4-2 to take fifth place. RIZAL ABDULLAH