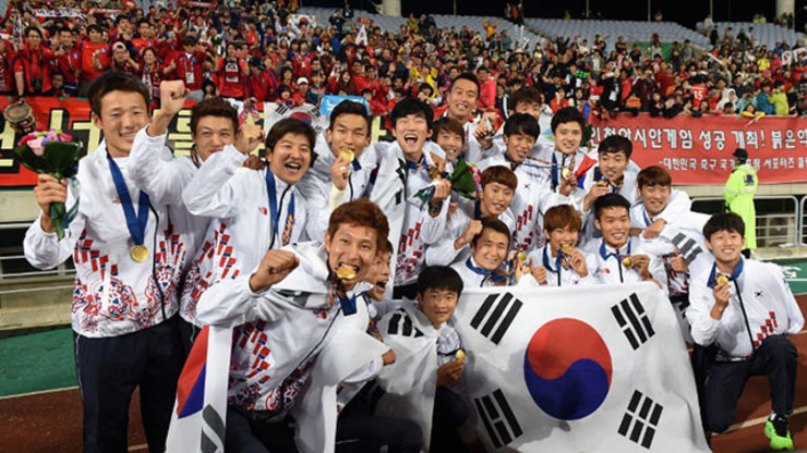 Defender Rim Chang-Woo smashed home a last-gasp winner from close range to deliver the knockout blow in an emotionally charged final, giving South Korea their fourth title and a first since 1986.

When the final whistle blew a matter of seconds later, the crowd of 47,000 rain-soaked fans erupted with joy as both sets of players slumped to the turf sobbing, having battled each other to a standstill.

“I’m very proud of my players for winning the gold medal for the first time in 28 years,” South Korea coach Lee Kwang-Jong told reporters after his players had completed a jubilant lap of honour draped in national flags. “It was a tough game but they were terrific.”

Sitting alongside him an awkward distance away, North Korea coach Yun Jong-Su raged about the officiating, insisting there had had been a foul before the winning goal.

“The referee’s assistant raised his flag, then put it down,” he fumed. “Our players saw the flag go up and stopped but then play continued and they scored. The officials should be fair but the referee did not want to blow his whistle for us at all.”

As a reward for their dramatic and symbolic victory in Incheon, South Korea’s players will be excused their two years of mandatory military service.

The home side survived a major scare in normal time when targetman Pak Kwang-Ryong thundered a header against the crossbar after 75 minutes for the North, who dished out some rough stuff throughout a game played 120 miles (195km) from the world’s most fortified border.

The countries remain technically at war after the 1950-53 Korean War ended in a truce, not a peace treaty, and over 1,000 riot police stood guard in and around the stadium as security was heightened for the gold medal clash.

The communist North claimed the women’s gold medal with a 3-1 victory over Japan on Wednesday, but their male counterparts struggled with the pace after being taken to extra time by Iraq in the semi-finals.

South Korea, 2-0 winners over Thailand in the last four, largely dominated a fiery encounter but lacked the killer touch, the winning goal resulting from a corner as the clocked ticked past 120 minutes played.

As panic struck the North Korean defence, Lee Yong-Jae nudged the ball goal-wards and it appeared to have crossed the line before Rim made sure with a fierce volley after it dropped to him.

Yun angrily shook his fists at the officials as his players wept uncontrollably, although replays suggested that the only infringement had been a handball on the line by a North Korea defender.

“It’s not fair,” he barked as he stormed off the pitch.

“I want to thank my players for giving every bit of energy. They fought right to the end,” he added after the ceremony, before taking one last swipe at the officials.

“The referee missed a lot of calls against Iraq and it was the same tonight. That’s what I want to tell you journalists. There should be no home advantage. The referees must be fair.”  – Agence France-Presse