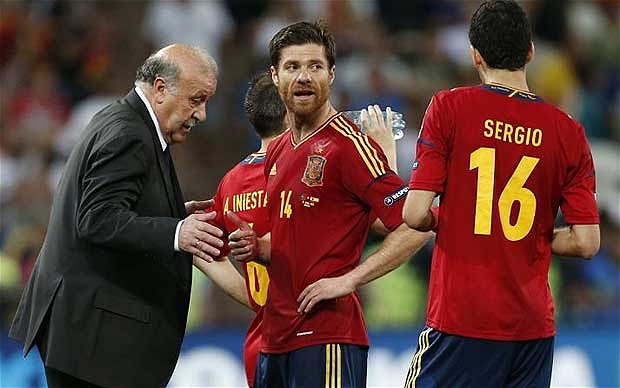 Spain boss Vicente del Bosque has demanded his players put on a show as his rejuvenated side prepare to welcome Germany, the team that succeeded them as world champions, in Vigo on Tuesday.

“When you get this kind of match there’s almost no difference whether the game is an official one or like in this case a friendly,” said Del Bosque, whose side go into the game on a high having rediscovered their form.

“They (Germany) want to remain at the highest level, and we want to keep up our post World Cup momentum,” said Del Bosque, after Saturday’s 3-0 European qualifier win against Belarus.

“We’re delighted to be taking on a team of such a high technical level. It’s the perfect test for us,” Loew said in Vigo, where the teams are due to play.

“But if we lose I won’t consider it a defeat that would compromise our chances for next year (of winning Euro 2016). It’s not so important,” said Loew.

The World Cup winning coach also suggested he would give a run out to fringe strikers Kevin Volland of Hoffenheim and Stuttgart’s Antonio Ruediger.

Loew has recently complained that Germany is suffering a post World Cup hangover, and that a fresh start is needed in the New Year.

“After this match, we need a good break and a long holiday so everyone can recharge our batteries,” he said.

Spain captain ‘keeper Iker Casillas said the teams needed to live up to their reputations.

“Tomorrow (Tuesday) the last two World Cup winners go head-to-head so you really can’t get a more attractive game than that,” explained the Real Madrid stopper.

Spain romped to the 2010 World title in South Africa but fell to a dramatic first-round elimination at the 2014 edition in Brazil, won so impressively by Germany.

Del Bosque has rejuvenated his side, the reigning European champions, with players such as Real Madrid midfielder Isco, Juventus striker Alvaro Moratta or winger Jose Callejon.

“Against the Germans, we’ll be giving a run out to everyone we can,” said Del Bosque. – Agence France-Presse