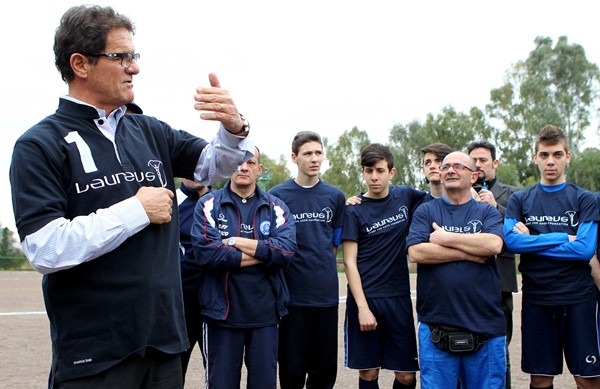 Fabio Capello at a workshop in Rome earlier this year.

A GLITTERING collection of football stars are to play in the first ever Laureus All Stars Unity Cup as part of the Laureus World Sports Awards in Kuala Lumpur, Malaysia.
The two managers – Fabio Capello and Michael Laudrup – are recruiting their players for the match, which will take place at the Royal Selangor Club, Kuala Lumpur, at 5pm on March 25, the eve of the Laureus Awards Ceremony.

The Laureus All Stars Unity Cup will feature some of the most celebrated football names in the world as players and coaches.

Goalkeeper Vitor Baia (Portugal) who played over 400 times for Porto between 1988 and 2007, including in the 2004 Champions League final when Porto beat Monaco.

Dutch midfielder Ronald de Boer, who played 67 times for Holland, including 1994 and 1998 World Cups and won Champions League with Ajax in 1995.

Portuguese defender Paulo Ferreira, who was capped 62 times and was in two Champions League winning squads for FC Porto and Chelsea

English winger Steve McManaman, who played 274 times for Liverpool and 94 times for Real Madrid as well as 37 times for England

Gaizka Mendieta, who played 230 times for Valencia before finishing his career with Middlesbrough in England. The midfielder won 40 caps for Spain.

Japanese maestro Hidetoshi Nakata, who played in three World Cup and two Olympics while forging a career in Italy with Perugia, Roma, Parma, Bologna and Fiorentina

Antonios Nikopolidis, who was one of the heroes when Greece won the 2004 European Championships. He kept goal 90 times for the national team.

As for the coaches, Capello is currently in charge of Russia and has managed AC Milan, Real Madrid, Roma, Juventus and England while Laudrup  won league titles with Ajax, Barcelona, Real Madrid and Juventus and played 104 times for Denmark. He guided Swansea to the English League Cup last season.

There will also be an Under-19 game earlier in the day and Luis Milla, current coach of Al Jazira, who played for FC Barcelona and Real Madrid and who was in charge of Spain’s youth team for several years, will be conducting coaching sessions with young footballers.