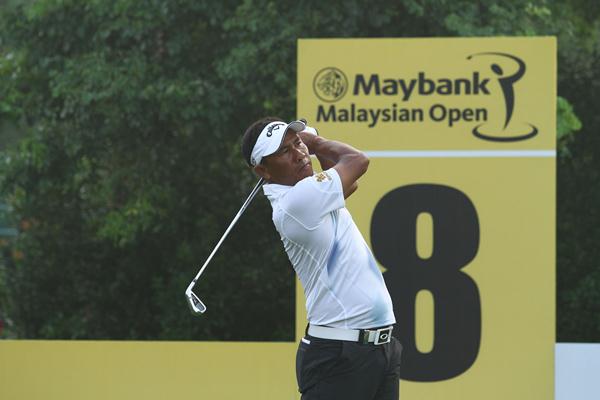 LOOKING AHEAD: Thongchai Jaidee hopes his players can rise to the occasion.

CAPTAIN Thongchai Jaidee believes Team Asia will only win the inaugural EurAsia Cup presented by DRB-HICOM next week if his players fight for one another and for continental pride.

The Thai star will lead a 10-man side against the Miguel Angel Jimenez-led Team Europe in the Ryder Cup-style showdown at Glenmarie Golf and Country Club from March 27-29 and wants Asia to show they belong on the world stage.

“It is important for my players to know that we are competing as a team, one for all and all for one,” said Thongchai.

“We are representing Team Asia and there is no greater honour. Now that we are in the team, we are all fighting for our pride and honour and it is important for Asia to show the golfing world that we belong on the world stage by producing our best golf and win the EurAsia Cup.”

Thongchai, the only man to win three Asian Tour Order of Merit titles, is excited ahead of the historic showdown and knows his role as leader of the team is crucial, especially in determining his pairings for the fourball and foursomes matches.

The 44-year-old will decide on the combinations when he meets up with the other nine members of his team at Glenmarie next week.

An option will be to pair by nationalities as Thongchai’s countrymen Kiradech Aphibarnrat and Prayad Marksaeng are also in the squad while Gaganjeet Bhullar and Anirban Lahiri of India and the Japanese pair Hideto Tanihara and Koumei Oda provide the tactical possibilities as well.

“I have spoken to some of my players about their preferences and thoughts about the potential pairings. It does make sense to pair our players by nationalities but it won’t be the sole criteria. I have some ideas in my mind now but I will not reveal them! Once the players come together next Monday we will have team meetings to finalise the pairings for the fourball and foursomes matches. I believe I have many options as we’ve got a bunch of great players,” said Thongchai.

The world number 46 admits that on paper Team Europe looks very strong, particularly with some of their player in great form coming into the EurAsia Cup presented by DRB-HICOM.