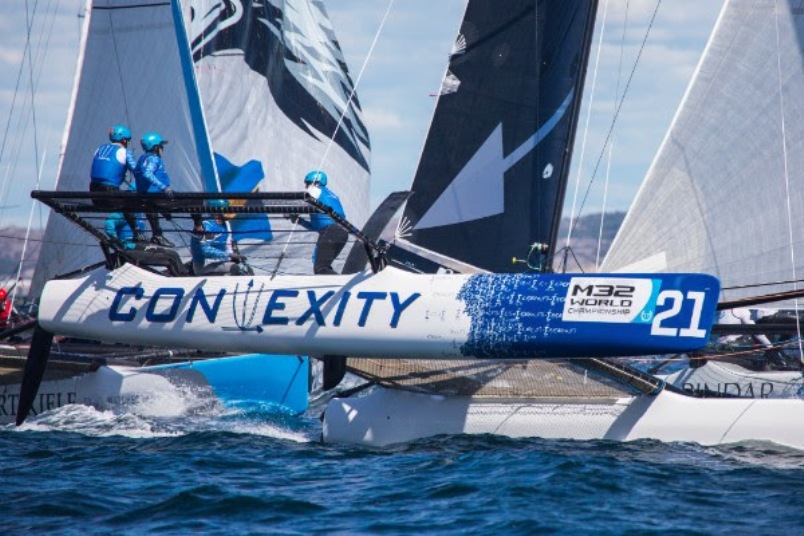 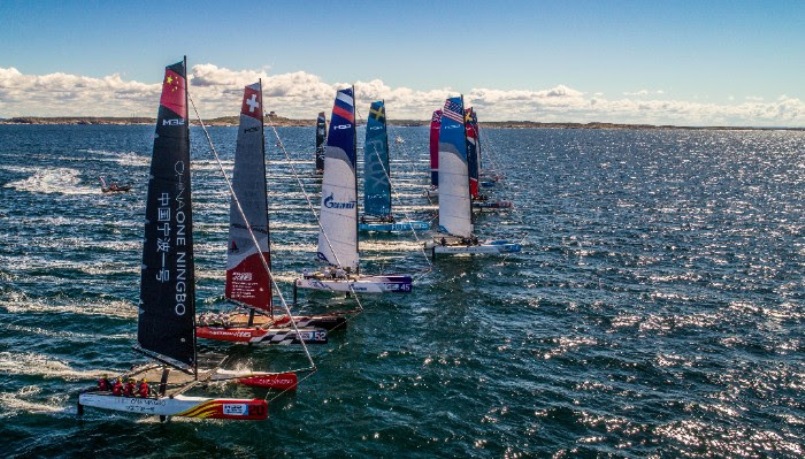 With 15 high-speed catamarans firing out of a reaching start, day one of the M32 World Championship was a big, fun learning curve for everyone in Marstrand, Sweden.

Getting ahead of the pack was a key skill on such a busy start line, and one sailor who seems to have learned the knack quickly is Olympic Finn sailing veteran, Pieter-Jan Postma who steered Sailing Team NL to scores of 2,2,1,3. The Flying Dutchman was the only skipper to keep all his scores inside the top three, although he’s tied on points with young Kiwi Chris Steele and CFA Sport Racing who scored 1,2,4,1.

Postma hasn’t long been racing the M32 catamaran but has got to grips with the high-performance demands of the boat very fast. “Today was a very awesome day, an amazing situation in Marstrand with 15 boats on the start line. It was very tight, very exciting and we had a good day. The reaching start is great. I see starting as an art, you hit the pace at the right moment, with the team all synced and the hull flying, it’s a fantastic experience.”

Fellow New Zealander Hayden Goodrick is sailing with Chris Steele and is one of the most experienced M32 sailors around. Today though, was new territory for everyone. “I don’t think we’ve ever had 15 M32s on a reaching start line and in that much breeze before. It makes for some pretty interesting chaos. I definitely heard a few bangs and crashes at times, fortunately enough we weren’t amongst that. We got some clean starts and that led to some good results for us.”

The 2008 Olympic Champion in the 49er skiff, Jonas Warrer, is also doing well in third overall, and the Danish skipper was the other race winner today. However the Corinthian owner-drivers are also faring well against the Olympic medallists and America’s Cup sailors in the fleet. Leading the Corinthian battle is Don Wilson and Convexity in fourth overall, while Richard Davies and Section 16 are in sixth overall. Wilson, a businessman from Chicago, commented: “Today was a ton of fun, just awesome conditions, a lot of great moments, and a second in the last race was a good way to finish the day. I’ve done a lot of sailing and have spent a fair amount of time in this boat so I think we should be fairly competitive but obviously the people who spend a lot more time sailing have an edge, no question about that.”

Ian Williams and his hot-shot crew, which includes Oracle Team USA’s wing trimmer Kyle Langford from the recent America’s Cup, suffered some gear breakdown with their bowsprit, forcing them to bow out of races two and three. With no discards, GAC Pindar has a mountain to climb if the British crew is to get back in contention for overall honours.

There was a crash between Magenta Robline and Essiq Racing Team. A protest hearing led to penalty points against Olivia Mackay’s crew in race two, while Nicklas Dackhammar’s Essiq crew were given redress, although both boats are towards the bottom of the scoreboard after day one. Mackay was unhappy with the outcome. “It was a port starboard, we thought we could make it. We were about half a metre short of crossing and we couldn’t believe it when they sliced straight through our rack.”

For the majority of the fleet, however, day one of the M32 World Championship was a spectacular start to the event. This evening the sailors, friends, family and race organisers are invited on a cruise along the coast to the island of Hönö, for a visit and some drinks and dinner at the state-of-the-art Aston Harald factory where the carbon-fibre M32s are assembled on the production line.