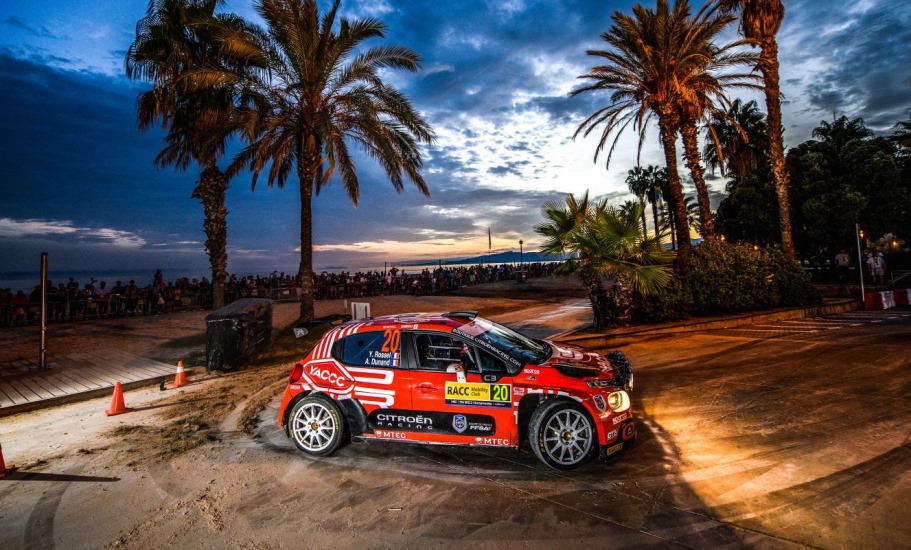 RallyRACC Catalunya – Costa Daurada hosted the penultimate round of the World Rally Championship and the final European Championship event of the season.

Two separate rallies, in terms of conditions, that provided yet further confirmation of the performance level of C3 Rally2, with overall victory in the ERC secured by Bonato and Boulloud whilst Rossel and Dunand finished as runners-up in the WRC2.

The two-wheel drive cars equally stood out this weekend with the impressive performances of Laurent Pellier – Marine Pelamourgue in the Corsa Rally4 and Oscar Palomo-Ortiz and Luis Vela Angel, ERC4 newly crowned champions with the 208 Rally4.

“This was our debut appearance at this rally and we knew that it would be a close fight. Nevertheless, we know what kind of performance level to expect on tarmac in the C3 Rally2 and so we were aiming high. We have fought hard all season to win and we’ve shown that we have the speed to keep pace with the very best drivers, even on the most competitive rallies. In WRC2, you have to have perfect rallies to win the title, something we managed to do in Croatia and Portugal. This weekend, we had to deal with a puncture at the start of the rally. We then managed to find the right set-up and ended up on the second step of the podium. We still had a good weekend. I have confirmed a WRC2 programme in 2023 with Citroën Racing and the C3 Rally2. What we have learned this season will therefore be very important.”

“After three consecutive wins in the French Championship and our strong performances in the ERC, together with my partners, we decided to take part in this tarmac event, reputed for being quite hard on the cars and their tyres. The C3 Rally2-Michelin package meant we tackled the stages full of confidence. The road was very dirty after the WRC drivers had completed the stages, so our good set-up helped us to express ourselves to the fullest and beat the newly-crowned 2022 ERC Champion. We have already had the pleasure of winning a rally in the WRC2 class, but this was our first ERC win. It’s always nice to win international level competitions. In the end, we have had a very good season with the C3 Rally2 since we have had three consecutive wins, and five wins overall, plus two podiums in the ERC. These results have made me motivated to contest more rounds of the ERC so I’m going to see if we can put something together.”

“I was immediately comfortable in the Corsa Rally4 on these incisive stages. The Opel is the perfect size for these roads and I was able to match the times of some of the Rally2 cars, which in principle are a lot faster. Finishing fifth at an ERC event in a two-wheel car is beyond my wildest dreams, especially given the tricky weather at the start of the rally. I’ve had magical season. I’ve always been in the fight to win races, be it in the Corsa Rally4 or the Corsa e-Rally. I’ve made a lot of progress with these cars. I would also like to congratulate Timo Schulz, who has just won the Opel e-Rally Cup and wish him the very best for his 2023 programme with Opel.”

“I’m proud to secure the ERC4 title. I’m the first Spanish driver to win this championship in their debut season. I would like to express my heartfelt thanks to all the people who have supported me in this programme. We have worked hard to obtain this result. This weekend, the rally was very difficult. With so much dirt pulled onto the stages, you had to keep to the right lines to stay on the road. We found the right set-up on the 208 Rally4 and that helped me get a good feeling in the car. I’m now fully focussed on my 2023 programme.”

“Citroën Racing impressed consistently this weekend in Catalonia, confirming the added value and the performance level of cars from the Stellantis Motorsport catalogue. The results of the crews competing with the C3 Rally2, the Corsa Rally4 and the 208 Rally4 reflect our strong teamwork, driven by the desire to obtain performance and wins. Yohan Rossel was very consistent, Alejandro Cachon impressed and Yoann Bonato was a clear winner in the ERC, whilst the Rally4 drivers in the ERC4 completely dominated their class this weekend. We were impressive at all levels. It’s a strong all-round result that shows the strength in-depth of Stellantis Motorsport in rallying. Lastly, a word on Patrick Dejean’s debut in the C3 Rally2 at this round. Our mission also involves giving up-and-coming amateurs like him the chance to enjoy events like this. Stellantis Motorsport has designed cars that are able to challenge for wins in their respective categories and provide enjoyment, regardless of the level of the driver behind the wheel. The results this weekend highlights once again the expertise we have when it comes to rallying. We are all ready for and looking forward to the challenges ahead in 2023.”