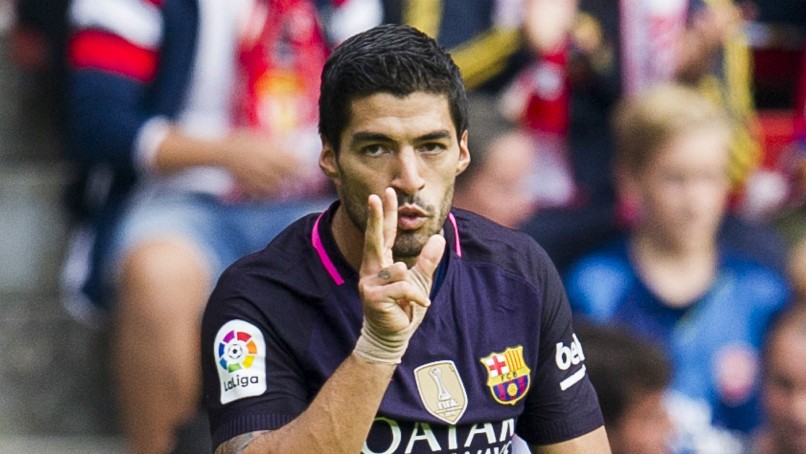 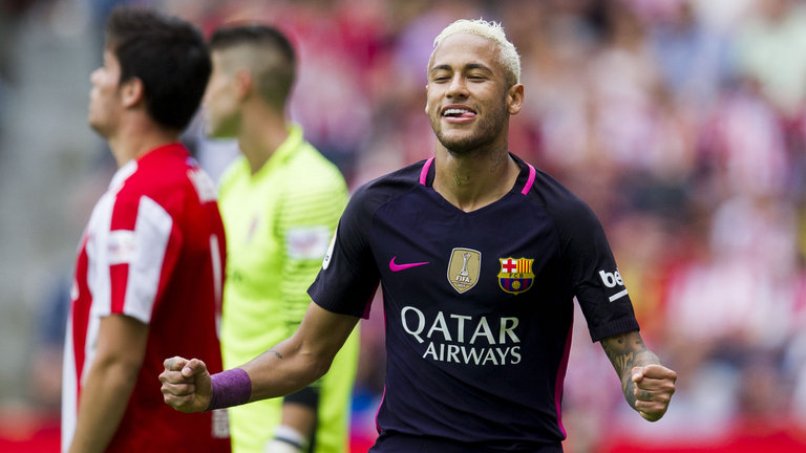 Barcelona shrugged off the absence of Lionel Messi to move to the top of La Liga as Luis Suarez and Neymar were on target in a 5-0 thrashing of Sporting Gijon.

The hosts enjoyed the better of the opening half-hour, but were hit by a two-goal Barca burst in three minutes as Suarez rounded Ivan Cuellar to slot home the opener before Rafinha headed home a second.

Sporting were reduced to 10 men 16 minutes from time when Alberto Lora saw a second yellow card and Barca made their man advantage count as a Neymar double and Arda Turan rounded off the scoring in the final 10 minutes.

Real Madrid can regain a three-point lead over Barca with victory when they travel to Las Palmas later on Saturday.

Despite scoring five goals for the second consecutive away game, Barca coach Luis Enrique was far from satisfied with his side’s display, particularly early in the second half.

“It is a result that doesn’t tell the true story of the game — 5-0 makes it seem easy and simple and that couldn’t be further from the truth,” he said.

“We were poor at the start of the second half, we didn’t kill the game off and Sporting could have got back into the game.

“Fortunately, that wasn’t to be and after the sending-off it unbalanced the game and allowed us to score those three goals at the end.”

Luis Enrique made five changes to the side that started Wednesday’s 1-1 draw with Atletico Madrid as Andres Iniesta, Ivan Rakitic, Javier Mascherano and Jordi Alba joined the injured Messi in dropping out.

The champions looked unsettled in the early stages and goalkeeper Marc-Andre ter Stegen was lucky to escape further punishment when he gave away a free-kick for handling outside his area with the score still level at 0-0.

However, one moment of Suarez magic turned the game in Barca’s favour as he raced onto Turan’s through ball and flicked the ball past the onrushing Cuellar before slotting into an empty net.

A fine team goal put the game beyond Sporting moments later as Neymar freed Sergi Roberto down the right and Rafinha met his cross with a powerful near-post header.

Barca appeared to have eased up in the second half ahead of Wednesday’s visit to Borussia Moenchengladbach in the Champions League as Sergio Busquets and Suarez were replaced by Denis Suarez and Paco Alcacer.

However, the goals flowed after Lora dived in on Roberto to leave his side a man light.

Alcacer was denied his first Barca goal when he smashed the ball off the underside of the bar, but Neymar mopped up the rebound to make it 3-0.

Roberto was the provider once more for the fourth as Turan powered home his cross at the back post four minutes later.

Denis Suarez then teed up Neymar to sweep home his second of the game two minutes from time.

And the Brazilian could even have had a hat-trick when he curled another effort off the post in stoppage time. – Agence France-Presse