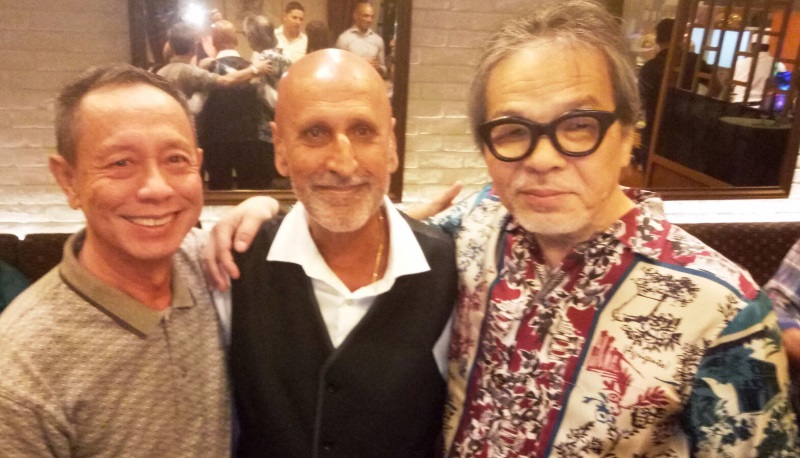 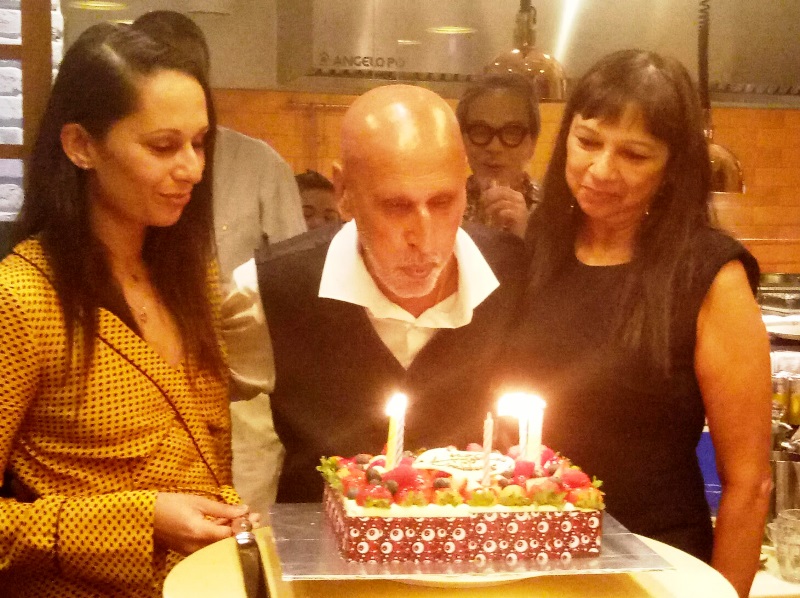 Tragedy and triumph came almost back to back for former Singapore hockey striker Devinder Singh Randhawa and, to his credit, he has held his head high in a special year.

He lost his iconic elder brother, Bhupinder Singh Randhawa, nicely nicknamed ‘The Gentle Giant’ in April to heart failure. And four months later, he was swept off his feet when his wife Chitra and daughter Sonia, threw a surprise 70th birthday bash on Friday at the Singapore Cricket Club.

Bhupinder, who migrated to Australia in 1983 after serving the SAF as a distinguished Captain and Singapore as an outstanding centre-half at hockey, played in the SEAP (South-East Asia Peninsular) Games in 1969, 1971 and 1973 gold-medal winning team. He also captained the SAFSA hockey team.

In a tear-jerking birthday speech, Dev, also like the late Bhupinder, a former SAF officer and Singapore hockey legend, poignantly remarked that “yesterday is history, today is a gift and tomorrow is a mystery”.

Completely enthralled at his surprise birthday party with the closest of family, friends and folks, he said: “At this juncture of my life what I have say here will pretty well summarise and relate to my extraordinary journey till this day. You know time has a way of moving quickly and catching you unaware of the passing years.

“It seems like only yesterday that I was younger although I’m still young! How the years have gone by and here I’m at the pinnacle of my life and it catches me by total surprise. How did I get here so fast?” 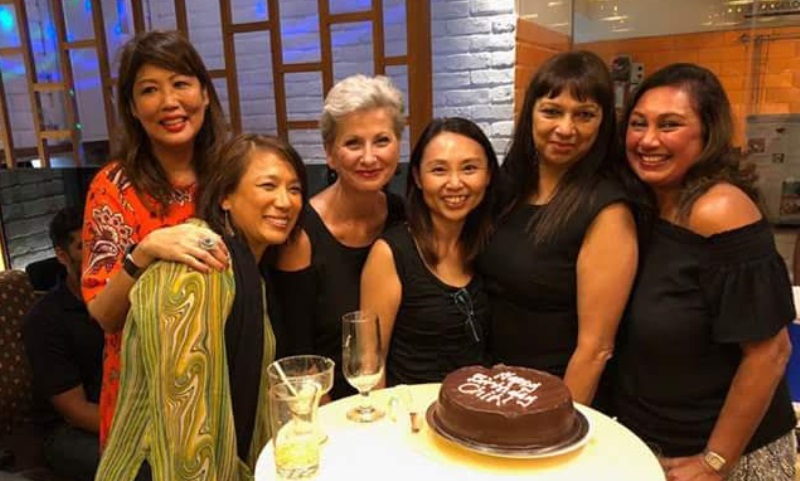 Eloquently paying tribute to the late Bhupinder, Dev says: “I have never even attended a family funeral until very late in my life, so I didn’t even know what a dying business is all about.  I remember seeing older people through the years and always thought they were years and years away from me, so far off that I could not fathom or even imagine fully what it would be like.

“But here it is. The reality has got to sink in. And so now I enter into this new season and for all intense and purposes, I will call it a ‘winter’, unprepared for the aches and pains and loss of strength and the ability to do things that I wish I had done but never did!”

Hugging his wife Chitra, a similar Virgo in zodiac traits, and daughter Sonia Sardana, who flew in from Australia the same day, Dev added: “Yes, I have had regrets. There are things that I wish I hadn’t done, things I should have done, but yet again there are many that I’m happy to have done. It’s all in a lifetime.

“So let me remind you that if you have not reached this ‘winter’ yet, it will be here faster than you think. So whatever you would like to accomplish in your life, please do it timely. Don’t put things off for too long as life is a gift for you. The way you live your life is your gift to those who come after. Make it a fantastic one.”

Off-the-record, Dev reminded me that Virgos are “special-of-special personalities” who can deflect and adapt, plus they want to make life easier and better for everyone, and those aren’t bad qualities to have in a marriage partner.

“Hey Suresh, it’s quality over quantity for Virgo, which makes them very good prospects for long-term committed relationships like marriage.”

Praising the divine Gurus for a strong mental and physical frame after 840 months, Dev philosophically said: “Remember, it is the health that is the real wealth, not pieces of gold and silver. And consider the following: Today is the oldest you have ever been yet the youngest you will ever be. So enjoy this day while it last. In summary, let me say, yesterday is history, today is a gift and tomorrow is a mystery.” 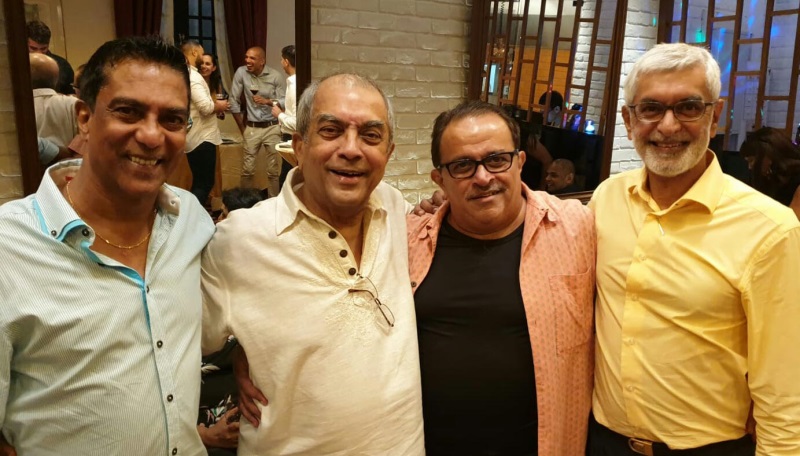 Dev, in the foot-steps of the late Bhupinder, continued a Randhawa tradition of a very passionate uniformed tribe, perhaps like the Sikh-version of the Hollywood Oscar-nominated screenplay for ‘An Officer and a Gentleman’ by Douglas Day Stewart.

Of the nine-member Randhawa family, the second, Mandhir Randhawa, was an Air Traffic Controller who had an unusual streak of three commissions, RMAF (Malaysia) RSAF (Singapore) and RAAF (Australia) and retired as a Squadron Leader in Sydney. The third, Savinder Randhawa, was a Singapore Police Force (SPF) Assistant Superintendent of Police (ASP), who once headed the Police Prosecution Branch. The late Bhupinder was No 4, followed by Devinder.

The “surprise of surprises” birthday bash was the discreet brain-child of Virgo-branded wife Chitra, who wanted to salute  her husband, “who simply deserves the best”, She explained: “He is my strength, a great husband, good father to Sonia and a wonderful grandfather to our beautiful grandsons, Aryan, Aveer and Aare. He’s my best friend for life.”

In the weeks to discreet preparations, Chitra literally entered stealth mode to put together a spoiler-free surprise event. I know she approached the closest Dev’s buddies in the SAF, hockey-world and SCC-arena. She even appealed to me, as a journalist, for long-lost media reports and photographs when Dev ruled the hockey pitch from the late 1960s onwards in order to put together a prolific 70th-birthday photogenic album.

I must put on record that I enjoyed the eulogies given by his mates from Dev’s bachelor-hood era, from Ricky Soh, his RSAF (Republic of Singapore Air Force) room-mate at Changi Officers Mess (COM), who almost pulled back the velvet curtains to their single-lifestyles. But he hinted that one of Dev’s favourite nicknames was “Randy” without going to the behind-the-scenes bawdy details!

SEAP Games 1973 vice-captain Arul Subramaniam, also a senior SAF officer, remembers the superlative sporting hallmarks of Dev, who he described as a “dazzling forward who with his elegant footwork and stick mastery could confuse the best of defences and make them go the wrong way”,

Arul, who shared a four-decade friendship with Dev, added: “Dev never loses his temper on and off the field, something I’ve always admired.” 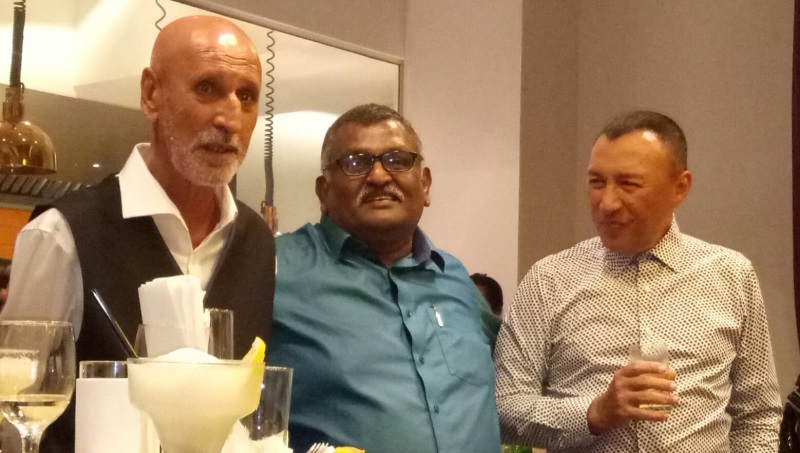 The Yul Brynner-personalised Dev, an alumni of Beatty Secondary School, recalled how he got to military uniform after finishing School Certificate (SC) to complete his Officer Cadet Course (OCC). He spearheaded the SAFSA (Singapore Armed Forces Sports Association) hockey team, finishing Singapore Hockey Federation (SHF) champions from 1968. And in 1970, tongue-in-cheek, he recounted how he got a big knock from his SAF bosses when only nine players (usually it should be 11 players) turned up for the title-winning match on the Padang against SRC (Singapore Recreation Club).

The sports headlines of The Straits Times the next day read: Nine-men SAFSA beat SRC. Dev recalled: “I got an immediate dressing down from the SAF Chief of General Staff (Brig General Kirpa Ram Vij) over the telephone, He didn’t care what the title-winning score was and sternly asked me: Where were the other two players?”

His saddest sporting moment was In March 1973, when SAFSA played a friendly against Cypres British Army on the SCC Padang. He says: “That was absolutely my doomsday as I seriously broke both my radius and ulna when trying to beat a lanky Cypres player. Unfortunately, I did not break my fall. A doctor on the ground later used my hockey-stick as a stint and I was carried to the hospital. That was to be the end of my hockey career and one of the reasons I missed out of the 1973 SEAP Games, where Singapore won the iconic hockey gold-medal.”

In my mind, as I spoke in my mini-birthday speech, Dev prolifically stood out as an “officer, sportsman and gentleman” and let me genuinely reiterate now, for a Sikh hockey role-model, he was more than just “big, strong and friendly…and bald!”.

Perhaps the most poignant moment of the three-hour birthday bash was when Dev froze for a good 60 seconds and almost went down on his knees when he came face-to-face with his only daughter Sonia Sardana, who flew in from Adelaide, Australia, just hours before the surprise bash.

It was pure emotional stuff from Bollywood: Dev covered his face, stood speechless, simply overawed by the young mother of three, who found quick time to surprise him on his auspicious 70th bash.  He later confessed: “This is the best birthday present ever, Sonia showing up, despite her tight family commitments, absolutely without any notice from Down Under.”

Yes, the biggest salutes to the “70-birthday boy” Dev: Truly befitting for someone who, over four months, held his head high when tragedy and triumph came knocking on his door this year.

As Dev perfectly mentioned in his tear-jerking birthday speech, “yesterday is history, today is a gift and tomorrow is a mystery”.

Many, many, many happy returns of the day, Devinder Singh Randhawa, your principled leadership, personal courage and professional insistence on treating even foes with respect will remain unmatchable. – By SURESH NAIR