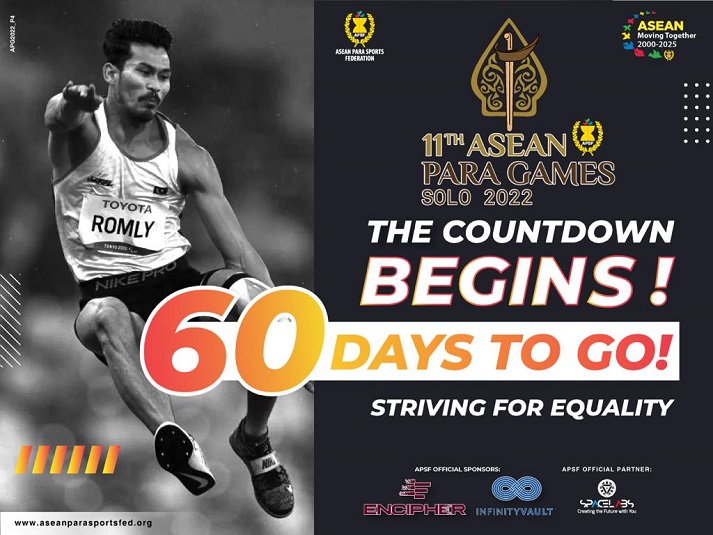 The 11th ASEAN Para Games Solo 2022 swing into its final phase of preparation as organisers continue to intensify efforts to ensure all organisational aspects are well in place before the commencement of the Games in July.

As the Solo 2022 Games enter its 60-Day countdown mark today, the Local Organising Committee (LOC) – INASPOC, NPC Indonesia and APSF are pulling all their resources to ensure that no stones are left unturned as the Games’ opening ceremony looms closer on July 30.

With the pandemic still lurking in the background, the 11th ASEAN Para Games are set to make a comeback after a lapse of four years, following the cancellation of two previous editions in Manila 2019 and Hanoi 2021 Games.

The 2022 Games are scheduled in Solo and three other main districts in Central Java – Karanganyar, Sukoharjo and Semarang – from 30 July to 6 August. Solo has stepped up to replace Hanoi as host of the 11th edition following Vietnam’s withdrawal as host due to the Covid-19 pandemic.

In a virtual meeting chaired by President Maj Gen Osoth Bhavilai, the ASEAN Para Sports Federation (APSF) Exco was briefed on the latest progress on the preparation of the Solo 2022 Games.

The APSF Exco was informed by NPC Indonesia Secretary-General Rima Ferdianto of the change of venue for Para-swimming from Intan Pari Swimming Pool to Jati Diri Swimming Complex in Semarang, some 100km away from Solo city.

“The Jati Diri Swimming Pool is considered as one of the best swimming venues in Central Java, having hosted the ASEAN School Games in 2019 and fully equipped with standard timing and scoring display board,” said Ferdianto.

The organisers were left with no choice but to relocate the swimming venue as the Intan Pari swimming complex was simply not feasible as it lacks proper facilities and structure to hold an international competition,” said Maj Gen Osoth.

APSF had, before this, raised concerns over the readiness of the Intan Pari swimming pool during the federation’s project review and visit to Solo and has requested that the issue be addressed urgently.

Maj Gen Osoth added, the LOC, NPC Indonesia and APSF secretariat are working closely to synchronise plans and overcome any organisational issues which include venue preparation and upgrades, participation of contingents, management of sports and technical aspects, classification process, anti-doping measures, protocol and events, media, communications, broadcast, publicity and marketing of the Games.

It has been confirmed that based on the Entry by Numbers (EBN), more than 1,600 athletes from all 11 contingents – Brunei, Cambodia, Laos, Myanmar, Thailand, Malaysia, Singapore, Philippines,  Vietnam, Timor Leste and Indonesia — will be participating in the Games, the second to be hosted by Solo after 10 years in 2011.