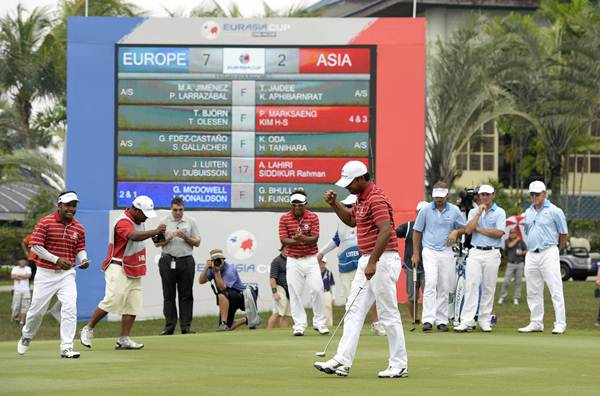 After the whitewash in the opening fourball yesterday, Team Asia regained some measure of pride by winning the foursome session 3-2 at the Glenmarie Golf and Country Club.

Prayad Marksaeng of Thailand and South Korea’s Kim Hyung Sung put Asia on the board with a commanding 4 & 3 win over Danes Thomas Bjorn and Thorbjorn Olesen. India’s Anirban Lahiri holed a pressure-packed seven-foot par putt at the last hole as he and partner Siddikur Rahman of Bangladesh hung on for a 1-hole victory over Dutchman Joost Luiten and Victor Dubuisson of France.

The top match also went the distance with Spaniard Pablo Larrazabal holing a six-foot birdie attempt on 18 as he and captain Miguel Angel Jiménez salvaged a halve with Asian captain Thongchai Jaidee and Kiradech Aphibarnrat of Thailand.

Japanese duo Koumei Oda and Hideto Tanihara recovered from 3-down at the turn to earn a halve with Gonzalo Fernandez-Castano of Spain and Scotland’s Stephen Gallacher while Europe’s lone win came through Major champion Graeme McDowell of Northern Ireland and Welshman Jamie Donaldson who fought back from 2-down through eight holes to defeat Malaysia’s Nicholas Fung and Gaganjeet Bhullar of India 2 & 1.

Europe needs only three and a half points from the ten singles matches on tomorrow to lift the first EurAsia Cup, but after today’s improved performance, Thongchai is hoping for a ‘miracle in Malaysia’, in the style of Europe’s unforgettable 2012 Ryder Cup comeback, when went into the last day singles four points behind the United States.

“Really happy with three points. Seven and a half points to win …. In golf, you never know.  We have another day. I told my players to make something happen,” said Thongchai.

Jimenez was pleased his men produced two points on the day when red numbers featured prominently in the opening stages of the foursome session. “We had a very tight match. If you look at the scoreboard, it looks like the other side of the coin of what happened yesterday and for a while, we didn’t have any point. It’s going to be a tough day tomorrow. The tournament is still alive at 7-3. We are not used to this weather, and they have a good team. We’ll try to get the points as soon as possible,” said the veteran Spaniard, who will face off with Malaysia’s Nicholas Fung in the opening singles.

Singles draw (Team Europe first)
8:40am: Miguel Angel Jimenez vs Nicholas Fung
8.52am: Graeme Mcdowell vs Thongchai Jaidee
9.04am: Thomas Bjorn vs Kiradech Aphibarnrat
9.16am: Jamie Donaldson vs Prayad Marksaeng
9.28am: Pablo Larrazábal vs Kim Hyung-Sung
9.40am: Victor Dubuisson vs Anirban Lahiri
9.52am: Thorbjorn Olesen vs Gaganjeet Bhullar
10.04am: Joost Luiten vs Koumei Oda
10.16am: Gonzalo Fernandez-Castano vs Hideto Tanihara
10.28am: Stephen Gallacher vs Siddikur Rahman