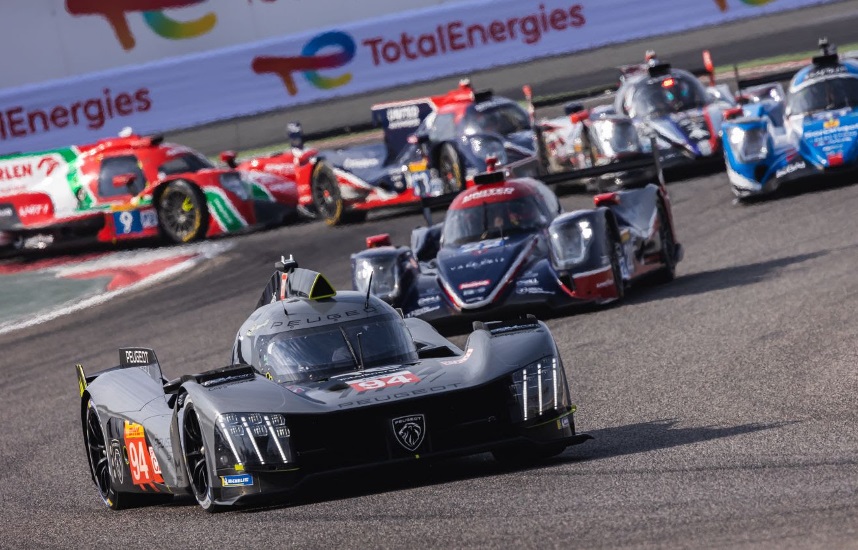 The 8 Hours of Bahrain was the last race of Team Peugeot TotalEnergies’ three-round 2022 programme ahead of its full assault on the FIA World Endurance Championship from 2023.

These encouraging results enabled the team to continue its apprenticeship of the series and collect valuable information that the drivers and technical squad plan to put to good use as they prepare for their next tests, beginning with Sunday’s FIA WEC Rookie Test.

The 8 Hours of Bahrain – last round of the 2022 FIA World Endurance Championship – enabled the season’s title chases to be settled once and for all and Team Peugeot TotalEnergies would like to congratulate the newly-crowned champions who it plans to emulate in the future!

The information collected by the team during the Peugeot 9X8’s third competitive appearance and the additional experience gained by the drivers in Bahrain will help to achieve that goal and were the prime objectives of this year’s programme.

The team’s roadmap for 2022 began with a private test in January which was followed by several others and, given that nothing can ever replace actual head-to-head competition, a participation in three races.

With this part of its mission now under its belt, the lessons it has learned will enable the team to move on to the next phase, beginning with a day of testing at Sakhir on Sunday, followed by further work in the weeks ahead at its headquarters in Satory, near Paris, and in private testing.

The different test sessions it has organised and the races it has contested this season have helped Team Peugeot TotalEnergies to make significant progress, and that has reassured it with regard to both its bold technical choices and how it is organised.

The fast-looming 2023 championship features a calendar of seven races – including the centenary-edition of the Le Mans 24 Hours – along with a mouth-watering entry that marks the dawning of a new golden age for endurance racing.

The race was flagged away at 2pm local time by FIA President Mohammed Ben Sulayem. The #93 and #94 Peugeots 9X8 started from the first and second rows respectively, with the air and track temperatures standing at 35°C and in excess of 40°C, and humidity levels varying between 20 and 50 percent! Sakhir International Circuit is notoriously abrasive and consequently hard on tyres, while the 37-car entry meant that traffic management and reliability were always going to be important parameters during the eight-hour race.

The team’s initial strategy took these different factors into account as the #93 Peugeot 9X8 double-stinted with first Paul Di Resta, then Jean-Eric Vergne and Mikkel Jensen at the wheel, before a planned final run for Paul Di Resta. It was Gustavo Menezes who started the race in the #94 car, before handing over to Nico Müller, then Loïc Duval, with Gustavo due to drive again to the finish. Particular attention was paid to tyres because, unlike at other venues, degradation can necessitate the full set to be changed, or just the left-hand tyres.

At lights-out, Paul Di Resta held position in the #93 car and spent his first stint lapping at a pace similar to that of the race leader. The #94 car got away to a more cautious start and its tyre strategy was adjusted after its first pit stop in order to gain extra pace. “Our tyre option wasn’t ideal,” reported Gustavo Menezes. “We made some changes for my second stint and the car’s handling was much better.”

While running inside the top-three shortly before the two-hour mark, the #93 car suffered a gear-selection problem but Paul Di Resta succeeded in getting the car back to the pits. “We always knew this would be a tough race,” he said. “It was a problem but the car was still fast.” Jean-Eric Vergne then took over and posted the team’s first fastest race-lap (1m49.709s). With a little more than two hours remaining, however, the Peugeot 9X8 was halted by transmission failure which prevented Mikkel Jensen from handing over to Paul Di Resta for his last run. At the halfway point, after completing his first double stint in the car, Nico Müller handed over the wheel of Team Peugeot TotalEnergies’ other car to Loïc Duval who had to pit ahead of schedule for a fuel-pump change.

At this point, a podium finish looked out of the question but the two 9X8s provided evidence of their potential by posting lap times on a par with those of the fastest cars. The #94 9X8 took the chequered flag in fourth place.

After its three competitive outings totalling 20 hours and more than 5,100 race-kilometres at Monza (Italy), Fuji (Japan) and Bahrain, Team Peugeot TotalEnergies has made consistent progress, and none of the problems it has encountered have gone unresolved. The 9X8 has now raced at three contrasting types of circuit, with different race scenarios, in varied weather conditions, in daylight and at night-time.

ROOKIE TEST AT BAHRAIN ON SUNDAY

The two cars will now be looked over ahead of Sunday’s Rookie Test (10am to 12 noon, local time, then 1pm to 4pm) which will provide three FIA WEC rookies with an opportunity to sample the team’s hybrid Hypercar.

With Stoffel Vandoorne side-lined by appendicitis, Maximilian Günther will share the #93 Peugeot 9X8 with Mikkel Jensen, the objective being to complete double stints.

The #94 car will be driven by Yann Ehrlacher and Malthe Jakobsen who will benefit from expert advice from Nico Müller.

The next competitive outing for Team Peugeot TotalEnergies will be the 1,000 Miles of Sebring in Florida, USA, on March 17, 2023.