Home 2020 The ID.R is back: Volkswagen electrifies Goodwood 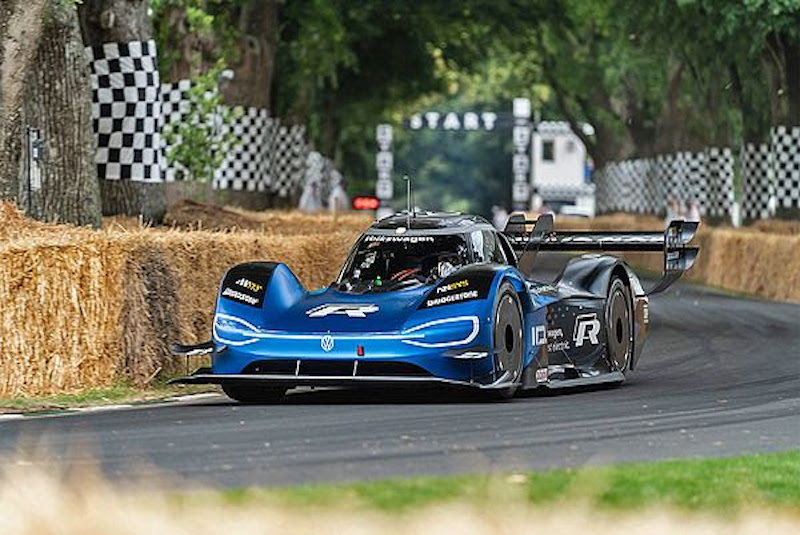 Volkswagen Motorsport to appear at Goodwood SpeedWeek with the ID.R electric race car

A superlative event for automobile enthusiasts at Goodwood Motor Circuit

Extensive digital reporting and livestreams, but no spectators on site

Welcome back, Volkswagen ID.R! 411 days after the record-breaking drive up Tianmen Mountain in China, the fully-electric race car returns to action at Goodwood SpeedWeek (16.­­­–18.10.2020).

After the coronavirus pandemic caused the cancellation of both the Goodwood Festival of Speed (FoS) and the Goodwood Revival, the organisers have launched a new event: Goodwood SpeedWeek, at which historic race cars meet present vehicles and visions of the future.

As the three-day automotive festival will take place behind closed doors, there will be extensive digital reporting, including multiple livestreams. Having taken victory at the Festival of Speed for the past two years with the 500-kW (680-PS) ID.R, Volkswagen Motorsport travels to the south of England with a new challenge: SpeedWeek is not taking place on Goodwood Hill, but at the 3.809-kilometre Goodwood Motor Circuit.

“For decades, Goodwood has been a real attraction for motorsport enthusiasts all over the world, and we are delighted that the organisers have launched SpeedWeek in these very challenging times,” said Volkswagen Motorsport Director Sven Smeets.

“As one of the few automobile events to take place this year, SpeedWeek offers extensive coverage. This way, we can once again demonstrate the fantastic development of electromobility at Volkswagen to an audience of millions, even if it can unfortunately only be on TV and via livestream this time.”

ID.R, the sporty figurehead of the ID. family

As the sporty figurehead of the ID. family, the ID.R will accompany the launch of the ID.31 and the world premiere of the ID.42, Volkswagen’s first two fully-electric production models. Delivery of the ID.3 1st Edition, which is limited to 30,000 cars, will begin in September.

The ID.3 has been available to order in many European countries since 20 July. The world premiere of the ID.4 will follow shortly. This sees Volkswagen underline its ambition to become the global leader in the field of electromobility. The brand anticipates that 1.5 million e-cars will be produced by 2025.

For the ID.R, the outing at SpeedWeek is a bridge between the past and the present day. The current lap record for the Goodwood Motor Circuit dates back to 1965 – set by Formula 1 drivers Jim Clark and Jackie Stewart, who both set times of 1:20.4 minutes in an unofficial Formula 1 race.

Should the ID.R, which already holds the all-time record on Goodwood Hill, set a new record during SpeedWeek, it would be the fastest car on both Goodwood tracks (Hill, Motor Circuit).

In total, the ID.R currently holds four records on three continents: as well as all-time records on Goodwood Hill, Pikes Peak in Colorado (USA) and Tianmen Mountain in Zhangjiajie (China), it also holds the lap record for electric cars on the Nürburgring-Nordschleife (Germany).