Home 2022 Tom Kim matches McIlroy with opening 66 for impressive start at THE... 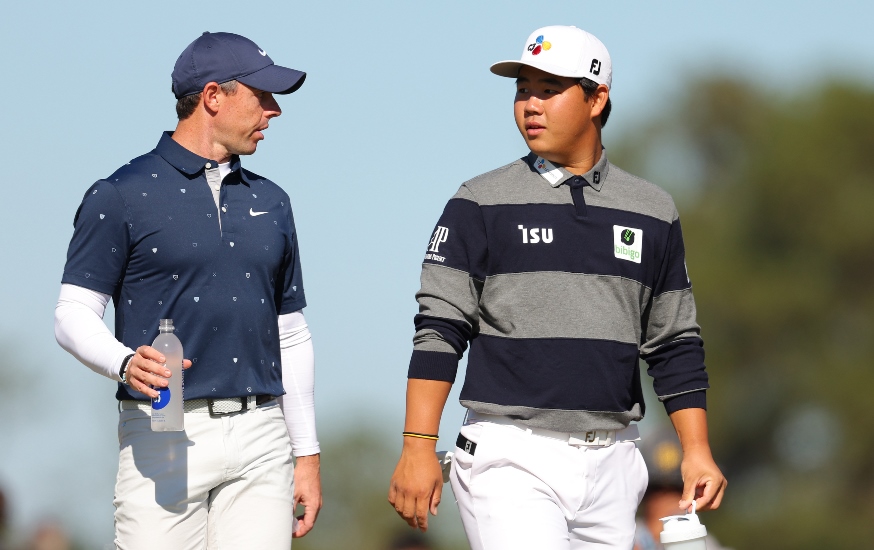 Korea’s rising star Tom Kim matched reigning FedExCup champion and title holder, Rory McIlroy as the duo shot identical 5-under 66s to lie one stroke back after the first round of THE CJ CUP at South Carolina on Thursday.

Playing in the same group for the first time, the 20-year-old Kim continued to show why he is already a two-time PGA TOUR winner by tying McIlroy, who holds 22 TOUR titles including four majors.

Trey Mullinax and Gary Woodland shot 65s to share the lead at Congaree Golf Club. THE CJ CUP, which was launched in 2017 as Korea’s lone PGA TOUR event, is being played for the third straight year in the U.S. due to the challenges of COVID-19. Sungjae Im and Si Woo Kim, who like Tom had featured in the Presidents Cup for the International Team last month, ensured a strong Korean presence on the leaderboard by returning cards of 67s for tied ninth position. K.H. Lee was a further stroke back.

Tom Kim stuck to his game plan as McIlroy, who has a chance to return to the World No. 1 position, consistently outdrove him by some 40 yards. However, the straight-shooting Korean enjoyed a haul of six birdies, thanks to some magnificent iron play, against a lone bogey on the last hole.

“It was really cool,” said Tom, who is ranked 15th in the world. “You know, I said it a bunch, like I said wow, that’s amazing, just talking to Joe (Skovron, his caddie). He (McIlroy) makes this game look so easy. I had so much fun for sure.”

McIlroy, who averaged 352 yards from off the tee, produced a blemish-free round and snared five birdies as he looks to maintain a hot run of form which saw him become the first golfer to win the prestigious FedExCup three times in August, and subsequently posting three top-4 finishes on the DP World Tour. The third player in their group, Rickie Fowler opened with a 74, a week after finishing runner-up at the ZOZO CHAMPIONSHIP in Japan.

The Northern Irishman has also become one of the many new Kim admirers, and offered further advice to Kim, who became the youngest golfer since Tiger Woods to win two PGA TOUR titles before turning 21 following his victory at the Shriners Children’s Open in Vegas last month.

“He didn’t really miss a shot out there. He’s a very, very solid player, plays to his strengths. Makes the same swing at it pretty much every time, like it’s very, very consistent, very steady,” said McIlroy, who is currently No. 2 in the world.

“He was sort of picking my brain a little bit out there about like speed training and I’m like, no, no, no, no. I think as he gets a little older and maybe a touch stronger, he’ll get that naturally, but I was like, do not go down that path, you’re good the way you are. He hits it far enough. I mean, just based on my own experience, I don’t think it’s something he needs to chase right now because like he hits it so well and his fundamentals are so good that if he starts to chase it, I worry that would get off and then it affects the rest of his game,” added McIlroy, who won THE CJ CUP when it was played at The Summit in Vegas last season.

Kim conceded it was tough trying to keep up with McIlroy. “It was really hard to just kind of play my own game. Seeing the lines he took and it was like 380 to the runout and he was saying, “Sit.” I was like, really? Like, sit? It was like 380, but he almost made it,” he said.

“Obviously the most important thing was trying to play my own game and not look at his line, but it was still so much fun. I had to make sure I wasn’t getting ahead of myself and try to take the aggressive line and do that. I didn’t have any problem with it.”