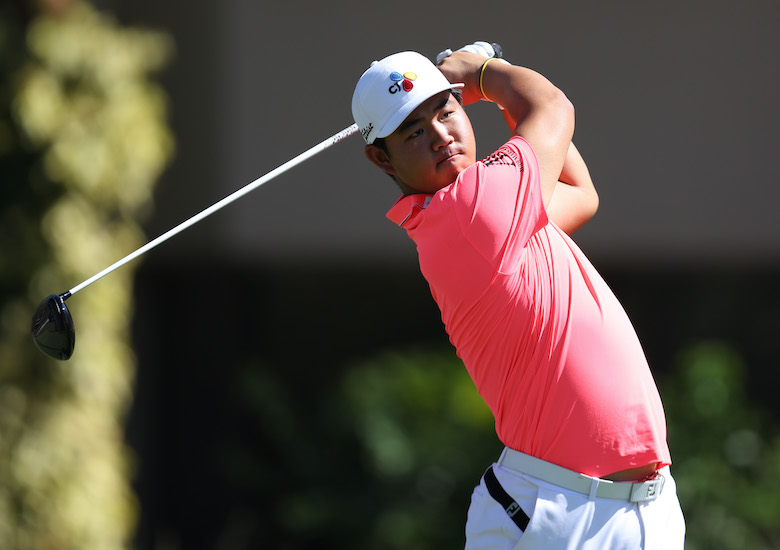 The stage is set for another mouth-watering showdown between Korean phenom Tom Kim and World No. 4 Patrick Cantlay as they take their Presidents Cup rivalry into the Shriners Children’s Open finale.

Tom fired a magnificent 9-under 62 at TPC Summerlin in Las Vegas on a low-scoring Saturday to tie Cantlay, who missed a birdie putt on his last for a magical 59, as they ended the third round on 19-under 194 in the PGA TOUR event.

Matthew NeSmith (63) and overnight leader Mito Pereira (67) are three back in tied third place on 197, while defending champion Sungjae Im and rookie S.H. Kim carded rounds of 63 and 64 respectively and will enter the final day four behind.

Another masterful display by the 20-year-old Tom put him in a position to bag a second PGA TOUR title in four starts but Cantlay, winner of the Shriners Children’s Open in 2017, stands in his way.

It will be another litmus test for the young Korean, who had faced Cantlay twice in the recent Presidents Cup, losing a Foursomes match to Cantlay and Xander Schauffele before producing a memorable 1-up win with Si Woo Kim in the Fourball against the American pair.

“I’ve played really solid. I took care of what I needed to take care of on this golf course and just needed a good round to give myself a chance on Sunday,” said Tom, who would become the first player since Tiger Woods to win twice on the PGA TOUR before turning 21.

After not making a single birdie on the back nine in the third round, Tom caught fire on his homeward stretch on Saturday with six birdies, including a tap-in birdie on the last to tie Cantlay, the 2021 FedExCup champion. Tom is also bogey-free through 54 holes.

While he is thrilled to go head-to-head with Cantlay again, Tom was quick to play down the prospects of the title being a two-horse race. “Anyone is in this really. It’s not just me and Patrick,” he said. “There’re a lot of guys who can still play well and win it. Just kind of stick to my game plan. I’ve been doing well for the past three days, and just hopefully have one more good round on Sunday and have a good finish.”

Cantlay was like a machine as he rolled in 11 birdies en route to a sizzling 60, which tied his career low and also the course record at TPC Summerlin, as he stepped up his chase for an eighth PGA TOUR victory. The stoic American, who successfully defended his BMW Championship crown two months ago, missed out on a 59 after missing his birdie attempt from 24 feet at the last. “The putt probably carried a bit too much speed, and just missed it a little high,” he said.

“I played great. Had a bunch of looks and made most of them. Took advantage of the par-5s and the drivable 4, and that’s what you have to do around this place. Same game plan as the first three days, and it’s going to take a low one again tomorrow.”

Twelve months ago, Im came from three shots back to win the Shriners Children’s Open and he will need a similar comeback if he is to bag a third career win in the U.S following a superb 63 on Saturday. He was joined by compatriot S.H. Kim on 15-under, with the latter shooting a fine 64 for a shot at a maiden PGA TOUR win.

“It would be great meaning to me to win it back-to-back,” said Im. “I know it’s really difficult to win back-to-back, but I’ve got one more day. Today, I didn’t think about winning. I just played with my mind being clear.”

Si Woo Kim, the top points earner for the International Team at Quail Hollow with three wins, shot a 67 to lie five shots off the pace, ensuring a strong Korean presence on the leaderboard in Vegas which is poised for a day of drama on Sunday.