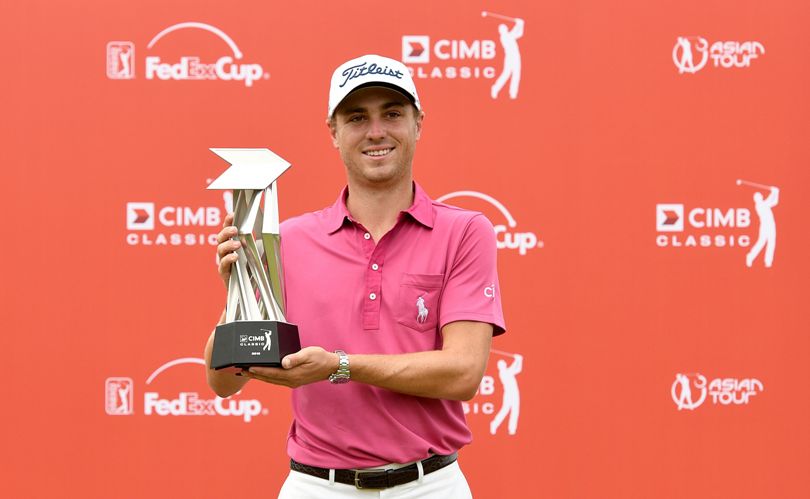 American Justin Thomas defended his CIMB Classic title in style after a sparkling eight-under-par 64 gave him a three-shot victory at TPC Kuala Lumpur on Sunday.

The 23-year-old Thomas took advantage of overnight leader Anirban Lahiri’s disastrous start in the final round when the Indian ran up a quadruple bogey nine on the par five third hole which wiped out his overnight four-shot lead.

Japanese star Hideki Matsuyama carded a bogey-free 66 to finish runner-up while Lahiri, who battled to a 72, settled for equal third place with American Derek Fathauer in the US$7 million event sanctioned by the Asian Tour and PGA Tour.

Thomas, who birdied his closing five holes on Saturday to stay in contention, enjoyed a fast start by picking up four shots over his opening five holes before turning in 31. He also birdied 10 and subsequently coasted home to a second PGA Tour victory with further birdies on 16 and 17.

“It was obviously a fun day. It couldn’t have happened if it wasn’t for my finish yesterday. That was huge for me and put me in a good position to have a chance to win. I definitely owe a lot of it to that,” said Thomas, who totaled 23-under-par 265 for the week and earned US$1.26 million.

“I was talking to Rickie (Fowler) last night and he said he had a finish on Saturday that won him the golf tournament on Sunday. You know, I felt like that was maybe the biggest five holes I’ve ever played in my life, even more so than last year, because it gave me a chance. If I’m going into today eight or nine back, I have no chance, or at least I don’t think.”

“That was just unfortunate, it really was,” said Thomas. “You never want something like that to happen. That’s one of the things that happens when you win, you get a little luckier breaks. You get fortunate. Anirban, he really played well. He hit some really good putts that didn’t go in, and there’s nothing for him to be down or upset about.”

Matsuyama, who finished top-five here last year, shot six birdies but wished he had put on the pressure much earlier during the final round. “I played well. I hoped to make a charge earlier but it didn’t happen,” said Matsuyama, the world number 13. “A little disappointed in not winning, but Justin played great and he deserved to win. I was watching the leaderboard but they were just too far ahead of me.”

Lahiri, the reigning Asian Tour number one, was crestfallen after squandering his best chance yet to win a maiden PGA Tour title. A poor drive that ended amongst the palm trees on the third hole led to his calamitous nine and while he bounced back bravely with a birdie on four and an eagle on five, his putter went cold on the homestretch as he finished four shots behind Thomas.

“Disappointment obviously. It was obviously a harder start. I got unlucky with the tee shot and just compounded my errors. My short game again, coming up a little bit to bite me. I tried my best. I fought back as best I could, but I just couldn’t get the putts to fall on the back nine,” said Lahiri, who was runner-up at the Venetian Macao Open last weekend.

“I had numerous lipouts and then just really disappointed that I didn’t birdie 17 or 18 or even 16, for that matter. Just didn’t get the numbers right with my wedges. I didn’t hit them close. It’s very disappointing.”

With the consolation of achieving his best finish to date on the PGA Tour, Lahiri knows his time will eventually come. “I have the confidence. It’s not like I need additional confidence. But I need validation now. I need validation in terms of my game. I need to see that happen. It’s just not happened enough, and it’s been a year of near misses so far,” said the 29-year-old.

“It’s a good problem to have but it’s something that I want to change obviously for the rest of this season on the PGA Tour. Not the way I would like to play on a Sunday, not at all. It’s hard.”

Scores after round 4 of the CIMB Classic being played at the par 72, 7,005 Yards TPC Kuala Lumpur course (am – denotes amateur):