Japan were sent crashing out of the Asian Cup on Friday as the United Arab Emirates shocked the defending champions 5-4 on penalties after a pulsating quarter-final.

Substitute Ismail Ahmed delivered the knockout blow after Japanese superstars Keisuke Honda and Shinji Kagawa had both missed their spot-kicks, sending the UAE through to the last four after a war of attrition in Sydney that finished 1-1 after extra time.

The Gulf side, enjoying their best run at the Asian Cup since finishing runners-up in 1996, will face hosts Australia in the semi-finals after a stunning victory over the Blue Samurai.

“We did not care enough at the start of the game, which caused us to concede a goal. Then, we had to fight for goals,” said Japan coach Javier Aguirre.

The Emirates exploded from the blocks, striker Ali Mabkhout smashing home a fierce volley after just seven minutes for his fourth goal of the tournament, but refusing to celebrate out of respect for Saudi King Abdullah, who died earlier in the day.

With Japan teetering on the brink of a shock defeat, however, substitute Gaku Shibasaki rifled in the equaliser from the edge of the box after 81 minutes following a neat lay-off from Honda.

The UAE players, wearing black armbands in honour of the late Saudi monarch, frustrated Japan with their intricate passing in the first half, playmaker Omar Abdulrahman pulling the strings in midfield.

Mabkhout’s opener came via route one, however, as he raced onto a long ball from Amer Abdulrahman to lash a right-foot past Japan goalkeeper Eiji Kawashima.

The Japanese, in contrast, looked leggy and bereft of ideas after coach Javier Aguirre named an unchanged team for a fourth game in a row, and only the introduction of fresh legs after the interval swung the momentum.

Substitute Yoshinori Muto wasted a golden opportunity to restore parity when he headed wide from point-blank range, before Kagawa forced a smart save from UAE keeper Majed Naser.

Captain Makoto Hasebe and Honda all came close as Japan threw everything at their obdurate opponents, Kagawa again firing wide with the last kick before the referee blew to signal the end of normal time.

Japan, who captured a record fourth Asian Cup in 2011, almost snatched the winner when Shibasaki’s free kick flashed wide but the UAE hung on to force a shoot-out where, of all people, Honda and Kagawa gifted Ahmed the chance to become a hero.

“The opponent won, but I think we played the betterfootball and had a more attacking mentality than them,” said Aguirre, who is fighting match-fixing claims from his time in Spain.

“We showed a fighting mentality today. We need to keep this attitude in the future.” – Agence France-Presse 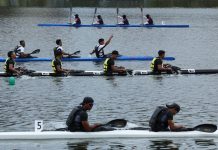