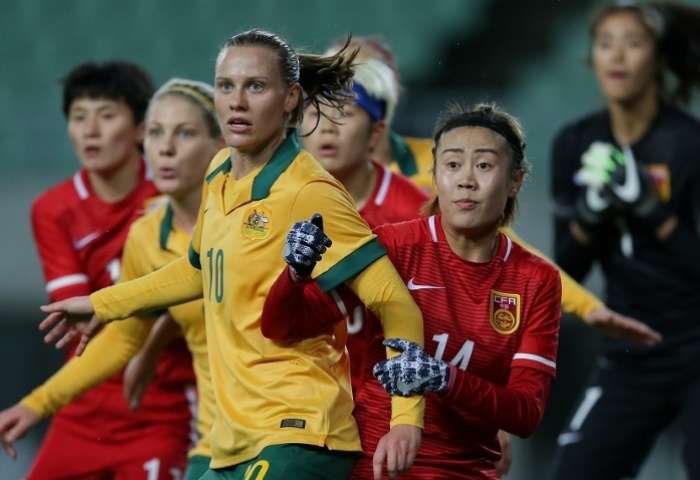 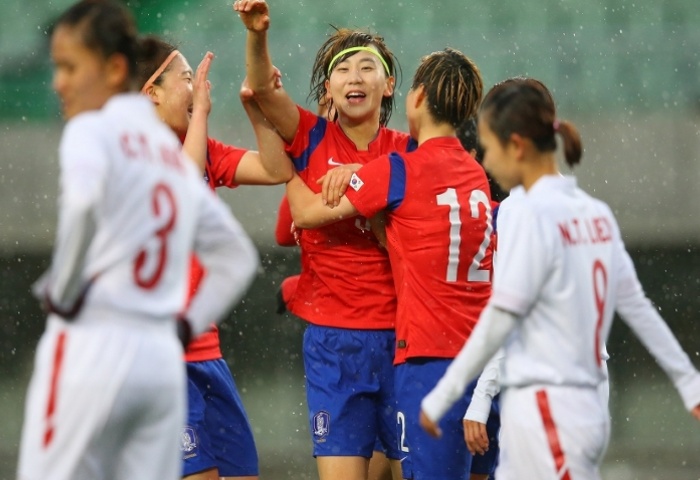 Ma Xiaoxu’s 16th minute header opened the scoring for China, who along with Australia, had already secured qualification for Brazil 2016 with a game to spare.

“It was a tough game with both teams coming in on a high after having already qualified, and maybe that showed a little,” said Australia coach Alen Stajcic.

“Things were a little disjointed at times, but we ended up with an equaliser which I think was probably a fair result.

“It was an issue with accumulated physical and mental fatigue and it was a little bit different in terms of motivation, but we learned a lot about some of the younger players which is important going forward.”

With both nations already qualified for Brazil 2016, both coaches took the chance to rotate their squads on a cold and wet evening.

And after an opening 10 minutes in which both sides saw half chances sail wide, China went ahead after 16 minutes as Liu Shanshan picked up the ball on the left and sent in a curling cross that was met by Ma, who leapt above Laura Alleyway and powered a header past the diving Mackenzie Arnold in the Australia goal.

Ma then had a chance to extend China’s lead eight minutes later, but this time she could not direct her header on target.

Check out the final standings

Australia’s Kyah Simon then saw a shot flash just wide and China’s Wang Shanshan had another header that also failed to trouble Arnold just before half-time.

Lou Jiahui sent an early warning shot as the second half got underway and substitute Ren Guixin tried her luck from distance shortly after the hour as China pressed to extend their lead.

But after China had dominated large periods of the second half, it was Australia who struck a late blow to level the contest as Van Egmond launched a first time shot from 25 yards that dipped and swerved past goalkeeper Zhao Lina and into the top corner.

“We shouldn’t be satisfied, but the players did a wonderful game in a technical and tactical approach and Australia had one fantastic moment,” said China coach Bruno Bini.

“The main reason we qualified is that we have good players of high quality and the FA gave us good support and in a tournament like this. We need some little things which are important and we had those.”

IN THE MEANTIME, a brace from Lim Seon-joo and goals from Lee Geum-min and Jeon Ga-eul eased Korea Republic to a 4-0 win over Vietnam at Nagai Stadium on Wednesday as Yoon Duk-yeo’s side earned their first victory at the AFC Women’s Olympic Football Tournament Rio 2016 qualifiers.

Lim struck first with a header in just the eighth minute before doubling her and her side’s tally with a tap-in 10 minutes later.

And substitute Lee Geum-min and Jeon added to the score in the second half as Korea added to earlier draws against DPR Korea and Japan to end the tournament on a high, while Vietnam suffered a fifth consecutive defeat in the six-team tournament.

“Despite the results before today, our players did their best against Vietnam. Throughout the tournament there have been some problems we need to improve, and with that in mind we need to develop more in order to be able to compete against other nations in Asia,” said Korea Republic coach Yoon.

“I mentioned about needing to score more goals before this game because our attackers and the team as a whole had failed to do so despite the fact we had been creating chances. In today’s match we scored after seven minutes and that made it easier for us to manage the game.

“We still have lots of things to improve, especially offensively. I think the team has the ability to create chances and score a variety of different goals, so that is one thing we have to work on.”

The match was played in testing conditions at Nagai Stadium, with a steady rain teeming down and preventing either side from stringing together passes as the ball held up on the increasingly stodgy pitch.

With combination plays proving difficult, Korea Republic began to launch aerial attacks and went close in the seventh minute when Lee Min-a controlled a high ball well inside the penalty area but saw her effort saved by Vietnam goalkeeper Dang Thi Kieu Trinh at the near post.

Check out the final standings

The respite was only temporary for Vietnam, however, with Korea Republic taking the lead from the resulting corner as the ball was played short to Ji So-yun, who twisted and turned on the right wing before delivering a perfect cross for Lim to head home at the back post.

Jeon missed a huge chance to make it 2-0 in the 12th minute, when a skidding cross from the left slid agonisingly beyond her despairing lunge with the goal at her mercy.

But Korea Republic did find the net again just six minutes later, though, when Lim was on hand to poke home after a goalmouth scramble following a corner from the left.

The closest Korea Republic came to adding to the score in the first half was when Jang Sel-gi tried her luck with a dipping effort from range in the 23rd minute, but Vietnam goalkeeper Dang Thi Kieu Trinh was equal to the effort and tipped it over the crossbar.

The match followed a similar pattern in the second half, with Korea Republic committing players forward in numbers as they looked to extend their lead.

And Lee Geum-min made it 3-0 in the 69th minute, stroking expertly home from a one-on-one after Korea Republic outnumbered Vietnam on another attack.

That left Jeon to seal the win with five minutes remaining after she raced onto a through ball from Jang Sel-gi and kept her cool to round goalkeeper Dang Thi Kieu Trinh before tucking into the gaping net.

For today’s game we had very heavy rain and our players are not so strong playing in those conditions. We were also playing against a very high level team, that’s why we lost today.

“We were the only team to qualify for this final qualification round. We came to compete with the highest level of Asian teams and I am satisfied with how my players did,” said Vietnam coach Mai Duc Chung.

“We learned a lot. First of all, we have improved our skill and technical play – particularly by playing the likes of Australia and China. They showed us many good things so our players will improve in the future.

“We are making programmes for women and children looking towards the long term, and in the near future we want to reach the top level in Asia.”