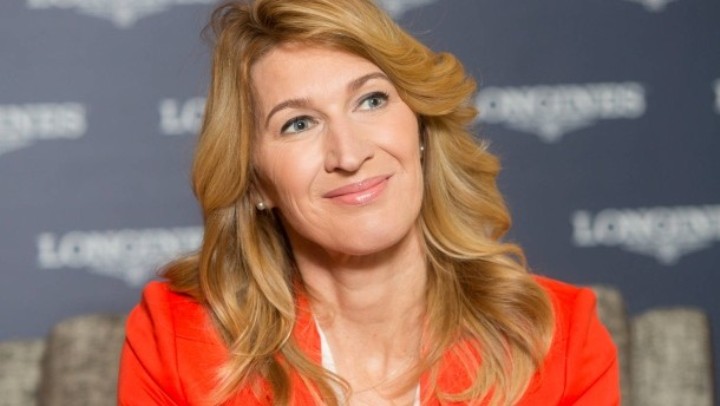 Steffi Graf believes Serena Williams will race past her Open-era record of 22 major singles titles, and insists she will be happy for the American when it happens.

Williams, who has won 21 Grand Slam singles events, was halted in her bid to tie the long-standing mark at the Australian Open in January when she was upset in the final by Graf’s fellow German Angelique Kerber.

But Graf expects Williams to come roaring back this year.

The 46-year-old, who dominated women’s tennis from the late 1980s until the end of the 1990s, insisted that there would be no lingering disappointment at being overtaken by Williams.

“Have I accepted it?” she laughed. “I gave everything to tennis and I feel great about what I have achieved,” added Graf, now a mother of two living with husband Andre Agassi and their two children in Las Vegas.

“I follow it somewhat but this is somebody else’s chance and I’m happy for them. It doesn’t take anything away from what I have achieved. I’m completely at ease.”

Graf completed a memorable calendar-year grand slam in 1988, capturing all four major titles plus a gold medal from the Seoul Olympics for good measure.

But the German credited Williams for revolutionising women’s tennis with her agility and brute strength.

“Her serve is just the biggest stroke ever in women’s tennis,” said Graf, who split her only two meetings against Williams at the end of her career in 1999.

“There’s nothing that’s ever been close to that kind of power. And just to see her athleticism — nobody has ever shown that in the sport. Hopefully it’s going to bring a lot of other players out who have that kind of power and can make the breakthrough.”

Graf, however, does not fear that the power-hitters will put the shot-makers out of business just yet.

“I see Simona Halep, who doesn’t quite have that physical strength but still shows incredible tennis,” she said.

“When you look at Angelique Kerber, she isn’t physically such a force either. But they use the court and they use different shots so I think (finesse) is still out there.

“Obviously you have different equipment nowadays to what we used to use. It constantly changes and that’s the way the sport should be.”

Graf, visiting Tokyo to promote a junior tournament run by Roland Garros, declined to comment on the failed drugs test by Maria Sharapova when she spoke to AFP late on Tuesday. Williams has praised the “courage” of the Russian, who could be facing a lengthy ban.

Graf did, however, tip Kerber for more grand slam success after her Melbourne triumph.

“I’ve watched and followed her, I’ve practised with her over the years a little bit,” she said.

“I was pretty aware of the talent and her capabilities. She was pushing for many years and I always felt like the confidence held her back a little bit. But I felt like she was on the right track, like it was a matter of time.”

Graf added: “I think she can add to this because she’s very comfortable on all surfaces. Right now all she has to do is stay with it and just believe she can do it. I think that’s what the Australian Open win is going to do for her — just to believe more and more and she will see even more results.” – Agence France-Presse