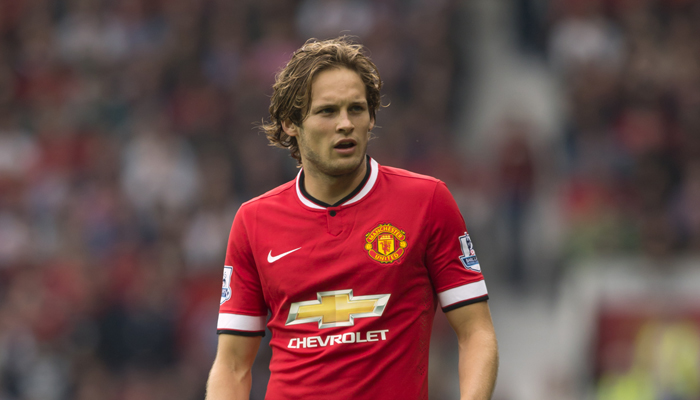 Manchester United manager Louis van Gaal hopes to welcome Daley Blind back to full fitness before the end of the month, in what promises to be further good news for the Dutch manager following a 2-1 win over Stoke that kept his side fourth in the Premier League.

Van Gaal’s compatriot Blind has been absent since injuring his knee playing for the Netherlands against Latvia in mid-November, although recent tests have been encouraging.

“It’s not so serious,” said van Gaal, who also hopes scans on Wayne Rooney’s knee and Angel di Maria’s hamstring will provide cause for optimism in the coming days.

“The injury is not so serious but he will not be back next week — by Christmas, maybe,” van Gaal added of Blind. “I think by the end of December we can see more players coming back and we will have light at the end of the tunnel.”

The return of key players to fitness is coinciding with a run of four consecutive league victories that have strengthened van Gaal’s hopes of leading United back into the Champions League next season.

However, this latest win owed much to Spain goalkeeper David de Gea who made stunning late saves from Marko Arnautovic and Mame Diouf deep in injury-time at Old Trafford on Tuesday to guarantee all three points.

“David is one of the team but I think he only had two or three balls to deal with, that’s it,” explained van Gaal. “So it’s very difficult for a goalkeeper to keep concentration and focus. But he improves every week so I’m very happy with him.”

The same could be said of United in general, with the team looking a different proposition compared to the nervous early days of van Gaal’s reign.

“Maybe we are enjoying more luck,” said the manager. “Maybe that’s coming because of the fighting spirit we are showing.

“It’s fantastic when you see that in the team and that is why the fans are also excited.

“We have had to fight until the end, with the long balls they put forward to Peter Crouch, and we have survived.

Marouane Fellaini’s opening goal goal was cancelled out by a superb 39th-minute strike by Steven N’Zonzi before Juan Mata’s free-kick into the box found its way directly into goal just shy of the hour mark, despite Marcos Rojo’s efforts to get a touch.

“We’re disappointed with the award of the second goal,” said Hughes.

“We clearly think it’s offside and Rojo was clearly interfering with play, he headed the ball from an offside position,” said former United striker Hughes, clearly convinced the Argentina defender had got the final touch.

“The referee and his assistant should have cancelled that out.”

Stoke were similarly unfortunate to taste defeat at Liverpool last weekend and now face a home meeting with Arsenal on Saturday.

“That is two high-profile games against top teams where we haven’t got the reward for our efforts,” said Hughes.

“That’s a disappointment for us, but it’s a big game against Arsenal at the weekend. We’re encouraged by what we’ve done here tonight and we’ll look forward to it.” – Agence France-Presse