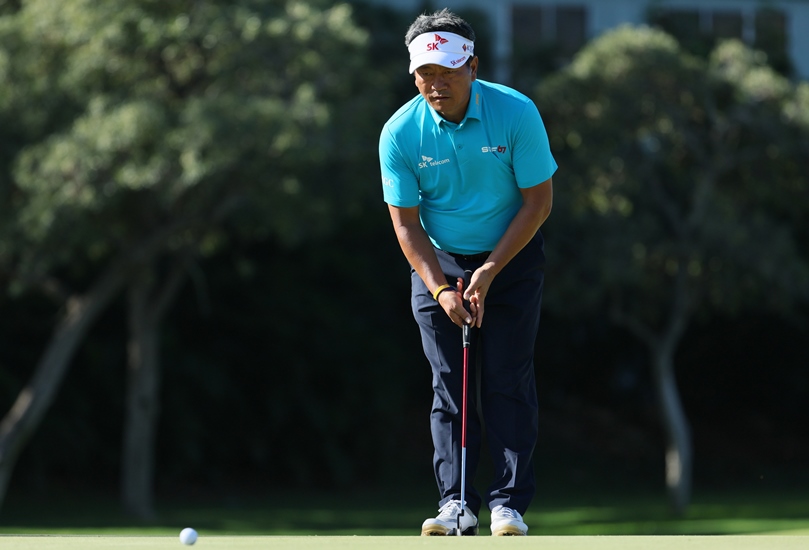 Korean golf legend K.J. Choi wielded a hot putter as he rolled back the years with an opening 4-under 66 at the Sony Open in Hawaii on Thursday to lie two strokes behind clubhouse leaders Jordan Spieth, Taylor Montgomery and Chris Kirk.

The 52-year-old Asian trailblazer made the most of his familiarity with Waialae Country Club in Honolulu by sinking five birdies against a lone bogey in the first round of the PGA TOUR tournament, which is celebrating Sony’s 25th anniversary as title sponsor.

A total of 10 players will return Friday morning to complete their opening rounds which did not conclude due to fading light. They include Korean rookie S.H. Kim, who was 5-under with two holes remaining.

Making his 19th start at Waialae, Choi emerged victorious here in 2008, which marks one of eight career PGA TOUR wins, and he and this week’s defending champion, Hideki Matsuyama of Japan, currently share the honour of being the leading Asians with most victories on TOUR. Matsuyama began his defence on Thursday with a solid 68.

“Since Sony invited me this week, I got a great chance to enjoy a good first round,” said a delighted Choi. “I was the champion here in 2008 and there were a lot of fans out there supporting. I want to thanks my fans for always being with me. Today’s round reminded me of a lot of things, some good old memories. I had a great round.”

The par-70 venue is suited to Choi’s straight-shooting game where he found 11 of 14 fairways to be ranked tied first in fairways hit. It was his flat stick though which helped him score as he rolled in a 27-footer for birdie on the fifth, and another 33-footer on the 12th hole.

“I had few of downsides but I covered it with my putting. I had great reads so I want to thank God for that. I will try to keep it the same for the remaining rounds,” said Choi, who now plays primarily on PGA TOUR Champions (over-50 circuit).

Si Woo Kim opened his 2023 campaign with a 67 which featured five birdies against two bogeys, a score matched by Chinese Taipei’s rookie, Kevin Yu. Another Korean, K.H. Lee shot a 69 while Tom Kim, who finished tied fifth last week at the Sentry Tournament of Champions, returned a 72.

Choi was pleased to see a strong Korean presence in Hawaii. “There are now seven to eight Korean players who are doing great on TOUR. They are getting married too and playing well. I’m very happy to see players getting used to life on TOUR and training hard. I was all alone at the beginning but now with many players, I’m looking forward to seeing them more and more. I think many of our players will end up in the world’s top-50. I’m very happy for them.”

Weather: Mostly Sunny. High of 80. Wind ESE 5-10 mph. The first round was suspended due to darkness at 6:11 p.m. with 10 players yet to complete their round. Those players will be back in position at 8 a.m. on Friday, with the second round beginning as scheduled at 7:10 a.m.