Home 2023 Audi Tradition: many anniversaries and events in 2023 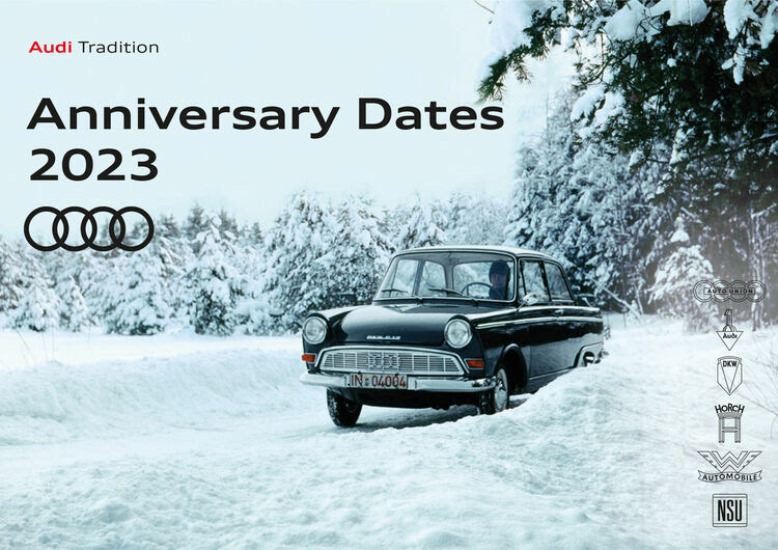 Audi Tradition is starting a new season marked by numerous anniversaries, first and foremost the 150th anniversary of the traditional NSU brand. For this special occasion, Audi Tradition is bringing classic NSU models from its historic vehicle collection for trips and events.

An overview of the most important anniversaries of the year is provided in the booklet “Anniversary Dates 2023”, which is now available for download from the Audi MediaCenter.
Two anniversaries are highlighted in Audi Tradition’s annual schedule: “150 years of NSU” and “25 years of the Audi TT”. Since its premiere in 1998, the sports car has been delighting fans worldwide with its driving pleasure and purist design.
A quarter of a century of Audi TT and the anniversary of the style icon is closely linked to the history of Audi Hungaria. The AUDI AG subsidiary based in Győr, Hungary, will celebrate its 30th anniversary in 2023.
Originally founded in February 1993 as an engine-only plant, Audi Hungaria took over the assembly of the Audi TT in 1998 in a production network with the Ingolstadt plant. A “TT” also played a role in NSU’s 150-year history. What began with ten workers and waterwheel-powered knitting machines in 1873 evolved at the Neckarsulm site into an impressive story of transformation with many technical innovations.
As is the heritage of NSU, these are still embedded in the genes of AUDI AG today. So it is no coincidence that Neckarsulm is now the headquarters of Audi Sport GmbH, which will celebrate its 40th anniversary in 2023 and has its origins in quattro GmbH, which was founded in 1983.
The path taken by the traditional NSU brand also reflects the development of transport in Germany, as it progresses from bicycles to motorcycles and finally to automobiles.
The NSU brand’s innovative spirit and multifaceted nature are also apparent in the fact that quite a few models will be celebrating anniversaries in 2023: for example the NSU Wankel Spider (60th anniversary), the NSU Quickly (launched 70 years ago) and the two pre-war automobiles NSU 6/30 and NSU 7/34 (95th anniversary).
Up-to-date event calendar always available in the Audi Tradition App
Audi Tradition is taking part in more than a dozen events in Germany and abroad this year. Classics on the event calendar include the Goodwood Festival of Speed (July 13-16), the Classic Days in Düsseldorf (August 4-6), the Donau Classic (June 22-24) and the Heidelberg Historic (July 13-15) as the two classic car rallies at the company’s home bases in Ingolstadt and Neckarsulm.
The Audi museum mobile will participate in International Museum Day (May 21) and the Night of Museums (September 9). An up-to-date calendar featuring the dates of all events at which Audi Tradition will be present with historic motorcycles or automobiles, including supplementary information, can be found in the Audi Tradition App.