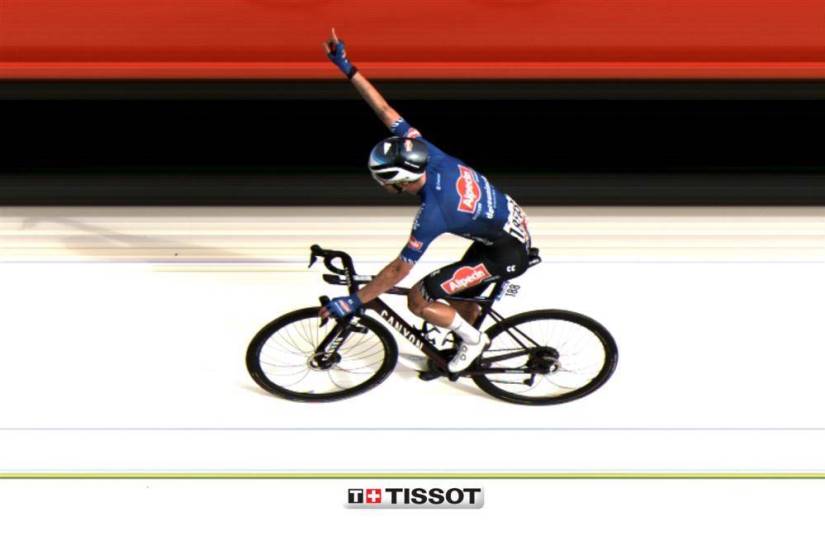 Jay Vine (Alpecin-Deceuninck) and Remco Evenepoel (Quick-Step Alpha Vinyl) provided more impressive climbing performances on the slopes up Collau Fancuaya, a gruelling ascent with slopes up to 19% at the end of stage 8 of La Vuelta 22.

The Australian rising star dropped all his breakaway companions, including the likes of Marc Soler (UAE Team Emirates) and Thibaut Pinot (Groupama-FDJ), to take his second win in three days of racing.

Through the fog, Remco Evenepoel (Quick-Step Alpha Vinyl) set a brutal pace only Enric Mas (Movistar) and Primoz Roglic (Jumbo-Visma) could follow. The Belgian retains La Roja on the eve of another showdown on the mountains of Asturias.

The first mountainous weekend of La Vuelta 22 is ahead of the riders and it begins with an unprecedented summit finish up Collau Fancuaya. With six categorised ascents packed in 153.4km, they will have to overcome over 3,500m of elevation. 171 riders start after the withdrawals of Nikias Arndt, Mark Donovan (Team DSM), Jake Stewart (Groupama-FDJ) and Anthony Delaplace (Arkéa-Samsic).

Alexey Lutsenko (Astana-Qazaqstan) is the first attacker of the day. His move unleashes a flurry of attacks as the riders quickly hit the first slopes up the cat-2 Alto de La Colladona (summit at km 9.8). Richard Carapaz (Ineos Grenadiers) and Alejandro Valverde (Movistar) are among the many riders on the early move, already forcing Remco Evenepoel’s Quick-Step Alpha Vinyl to chase hard.

Bruno Armirail then drops down to help Thibaut Pinot and Sébastien Reichenbach (Groupama-FDJ) make a very strong breakaway after 40km of battles. Quick-Step Alpha Vinyl still drive the bunch at an easier pace.

The polka dots for Vine and the green jersey for Pedersen

Over the penultimate climb of the day, Peralvia (cat-3, km 113.8), Vine has all but secured the polka dots. Pedersen makes the most of the intermediate sprint (km 127.4) to chase the green jersey with a total of 147 points, 5 more than Sam Bennett (Bora-Hansgrohe) had at the start of the stage.

Vine and Evenepoel are unleashed

Pedersen and Armirail have dropped from the breakaway ahead of the final ascent up Collau Fancuaya (10km at 8.5%, max gradient: 19%). Movistar and Ineos Grenadiers move to the front of the bunch. The gap is down to 3’15’’ at the bottom.

Jay Vine goes solo with 6km to go. Marc Soler, Rein Taaramäe and Thibaut Pinot are his fiercest chasers but they all come short while Remco Evenepoel sets off inside the last 3km of ascent. Enric Mas (Movistar) is able to follow him like he did up Pico Jano.

This time, Primoz Roglic (Jumbo-Visma) is also up there but the rest of the GC contenders are dealt a new blow by the young Belgian star who crosses the line 1’20’’ after Vine did. He strengthens his position at the top of the standings ahead of another showdown with Les Praeres. – www.lavuelta.es