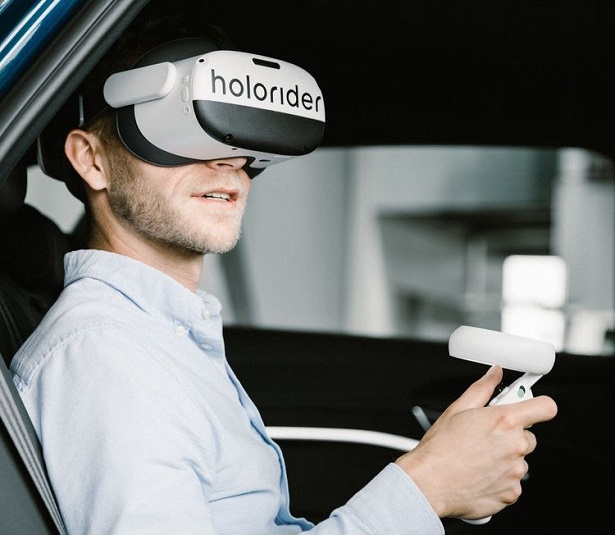 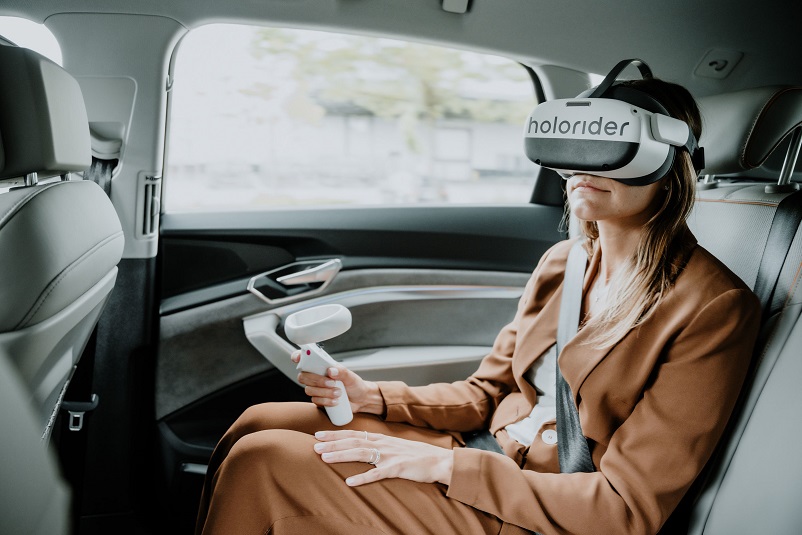 Showcase rides with new content demonstrate the potential of holoride

Travel to virtual worlds from within an Audi is soon a possibility. In the near future, back seat passengers can put on virtual reality (VR) glasses to dive into games, movies, and presentations.

The clou: The virtual content adapts to the driving movements of the car in real time. At a roadshow in California, holoride visited potential game studios to excite the best content suppliers about the start-up’s new technology.

Start-up holoride wants to make car rides a multimodal experience. In the future, passengers on the back seat can use VR glasses to experience movies, video games, and interactive content much more realistic than today.

This is made possible by a new technology that adapts the virtual contents in real time to the vehicle’s driving movements: if the car is taking a right curve, the spaceship in the imaginary world will also fly to the right, as an example. If the car accelerates, the spaceship speeds up too.

Initiated by Audi, development of this innovative VR or XR (extended reality) technology is being advanced and commercialized for different manufacturers by tech entertainment start-up holoride. The motion-synchronized voyage through virtual worlds also reduces the common phenomenon of car sickness often experienced by passengers reading a book or enjoying audiovisual media on electronic tablets.

“Elastic content” stands for an entirely novel media category made for driving cars that enables a new approach to creating content. From space adventures to streaming the latest blockbuster movies and tours through historic cities – the possibilities know practically no bounds.

Virtual journey through time in the Audi e-tron through Salzburg

Attendees of the Salzburg Festival were treated to a first taste of this edutainment format. In the back of an Audi e-tron*, guests approached several locations that played a particular role in the festival’s development.

In the Audi e-tron*, passengers experienced historical scenes from the festival’s past via VR glasses. Especially musical milestones were at the center of the three-dimensional animated VR journey through Salzburg.

holoride was first presented at CES 2019 in Las Vegas. In cooperation with Disney, holoride created an in-vehicle, action-packed VR gaming experience based on the character Rocket Raccoon from Marvel’s Guardians of the Galaxy.

On a roadshow through California from Los Angeles to San Francisco, holoride visited other production and game studios to demonstrate the technology’s possibilities to potential partners. The roadshow also afforded the opportunity to win over journalists who were given the chance to experience the current state of the technology.

Immediately following the roadshow, journalists in Ingolstadt were given the opportunity to test the possibilities afforded by the state-of-the-art in VR entertainment. Participants were invited to navigate a mystical action game via an avatar. Visitors to IAA 2021 in Munich, this year under the fitting motto “Let’s talk about progress,” can be among the first to take demo rides with holoride.

In the future, the progressive automation of travel by car will not only make new forms of entertainment possible while driving – it will also open up increased opportunities to learn and work on the road. When drivers also no longer have to concentrate on driving in the future, they can turn their attention to other things: working, reading, watching movies – or gaming.