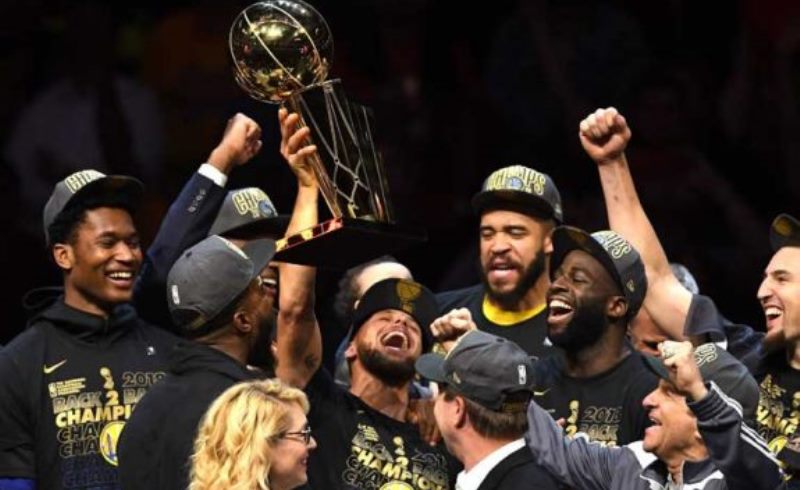 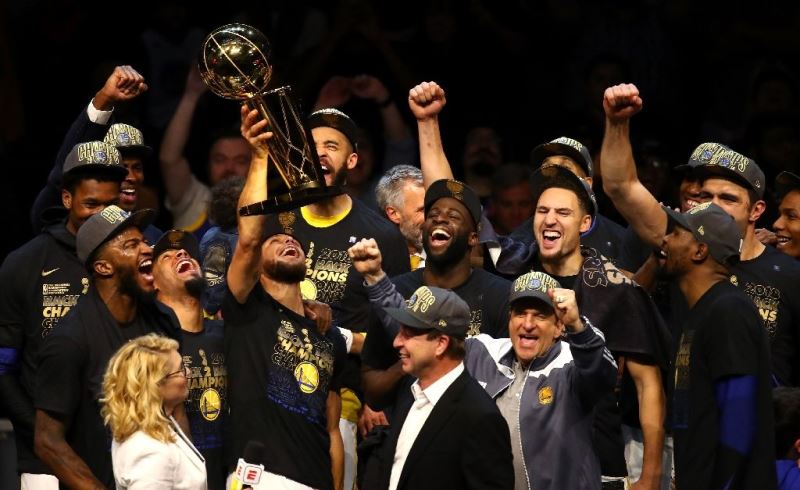 Stephen Curry scored 37 points and Kevin Durant was named the NBA Finals Most Valuable Player for the second consecutive year after 20 points, 12 rebounds and 10 assists — his first finals triple double.

“To win in a sweep, it feels pretty good,” Durant said. “Just knowing the work you put in paid off means something.

“It feels great to go out there and win a championship with these guys the way we did it. To finish it off with a sweep feels so good.”

The Warriors inflicted the first 4-0 NBA Finals blanking since the Cavaliers were swept by San Antonio in 2007.

“It’s an unbelievable feeling to come here with a mission and get the job done,” Curry said.

It was the fourth year in a row the Warriors and Cavaliers met in the finals, Golden State winning in 2015 and the past two years.

“This is so hard to do and to do it three years out of four years is incredible,” Warriors guard Klay Thompson said.

Golden State claimed the sixth crown in club history, matching the Chicago Bulls for third on the all-time list. The Warriors won in 1947 and 1956 when based in Philadelphia plus 1975, 13 years after their move to the San Francisco Bay area, and the latest run.

“This was the hardest one we’ve had by far,” Warriors coach Steve Kerr said. “It was definitely the toughest from the standpoint that it’s the fourth year in a row that we’ve attempted to get back to the finals. It was hard and it gets more and more difficult as you go through.”

Cavaliers star LeBron James revealed after the game he had been playing with a broken right hand for the past three games.

“Self-inflicted, post-game after game one. Very emotional. For a lot of different reasons,” James said. “I let the emotions get the best of me. Pretty much played the last three games with a broken hand.”

James struck for 51 points in the opener, the fifth-best game total in finals history but it was a post-game punch out of frustration, into a blackboard according to ESPN, that caused the injury. James saw a referee call reversed against him and J.R. Smith forego a final shot with the score level, thinking the Cavs were ahead.

James, playing his eighth consecutive finals, scored 23 points, grabbed seven rebounds and passed off eight assists on Friday but fell to 3-6 in the finals for his career.

At 33, James might have played his final game for the Cavaliers. He can opt out of his contract and become a free agent next month.

After leaving Cleveland with broken hearts in 2010 for Miami, James might leave the city again — with a broken hand.

“I have no idea at this point,” James said. “Sitting down and considering everything, my family is a huge part of whatever I’ll decide to do in my career, and it will continue to be that. So I don’t have an answer for you right now.”

Fans chanted “M-V-P” in the final minutes to James, who returned to the Cavs in 2014 — sensing it might be their last chance to do so with him in a Cleveland uniform.

“I hope he stays,” Cavs coach Tyronn Lue said. “But after a game like that I’m not in any position to talk about that.”

“We just know how to win,” Curry said. “We keep waking up every day and trying to get better and we end up here. For us to be able to be here again, we can’t get enough of this feeling.”

A James slam dunk capped a 14-4 Cavs run to open the second quarter, putting Cleveland ahead 39-38, but Golden State answered with a 11-4 run and stretched the half-time lead to 61-52.

The Cavaliers would come no closer in the second half.

“They made some mini-runs, but over the course of 48 minutes our will took over,” Curry said.

“We knew they were going to come out with a tough first punch and we answered it and ran right back at them, set the tone for the whole game.”

Golden State outscored Cleveland 25-13 in the third quarter, James managing only four points, and the Warriors rolled through the final minutes.

James was removed with 4:03 remaining and congratulated the Warriors before taking a seat on the bench.

“When you play one of the best it brings the best out of you as well,” Durant said of playing against James. – Agence France-Presse