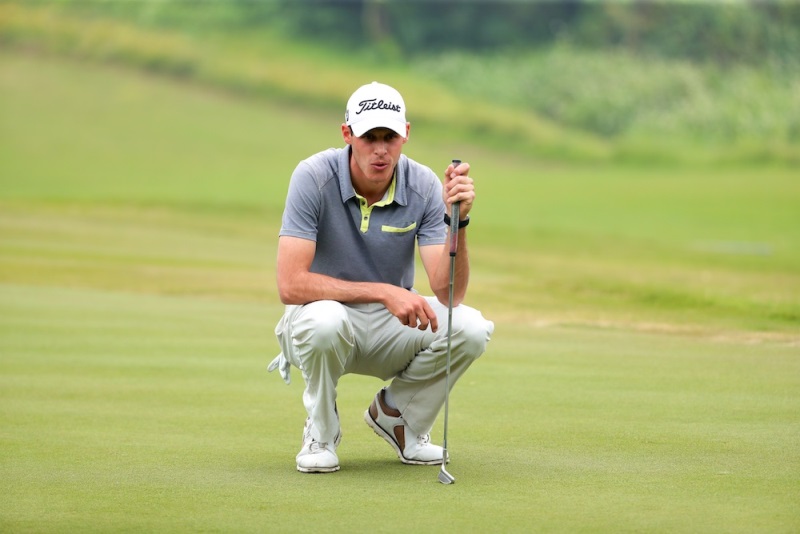 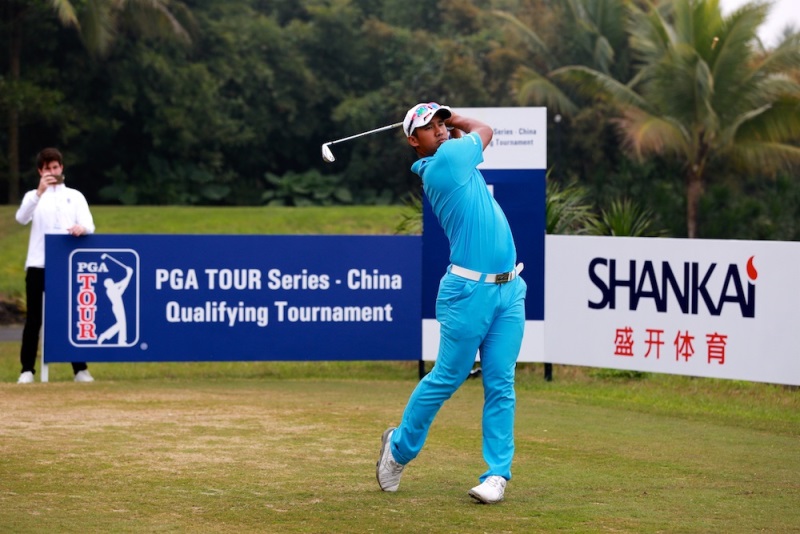 American Joseph Winslow shot a 4-under 68 to take a three-stroke lead heading into the final day of the PGA TOUR Series-China International Qualifying Tournament No. 2 at Mission Hills Haikou’s Sandbelt Trails Course.

Earlier in the day, Chinese Taipei’s Minhsuan “Max” Hsieh carded two eagles and a hole-in-one in his final seven holes for a 65, following opening rounds of 79 and 76. He moved from a tie for 92nd at the start of the day to a share of 39th at 4-over.

The top-15 finishers will earn full cards and the next 25 and ties will be conditionally exempt for a Series that rewards the top-five money winners with places on the Web.com Tour, the path to the PGA TOUR.

Standing 6-foot-5, the big-hitting Winslow showed his intentions from the first when he hit driver and his playing partners took an iron and a hybrid. The Kansas native birdied No. 2 and then eagled the par-4 third by holing out from the sand after pushing his drive into a greenside bunker.

“Today was pretty solid again. I hit the ball pretty well, especially for the first 10, 11 holes, putted pretty solid, had some good short-game shots, but didn’t quite take advantage of some of the holes. I felt I had a few opportunities out there. Overall, solid, did what I needed to, but could have played better,” said Winslow.

Although on track to earn a full card on the Tour, Winslow’s taking little for granted after last month’s PGA TOUR Latinoamerica qualifier in Bogota, Colombia, when a closing 80 dropped him from solo second to 17th, securing only conditional status on that Tour.

“That was a really important day for me, probably one of my biggest lessons and something I needed to learn here for 2018. As soon as I got done that day, I’ve been thinking about this specific day for two weeks now, how I wanted to get ‘revenge’ at the PGA TOUR China qualifier and to get back into that position,” said Winslow, who played 12 events on last year’s PGA TOUR Latino America.

“I’m comfortable at the top of the leaderboard, I just had a bad day over there, but I learned the lessons that I needed to and adjusted my preparation. We started to do that today, and it worked pretty well. It’s now time to make a couple more adjustments on the nutrition side for tomorrow and be ready to rock and roll.”

Irawan, 27, started the week with a 75 but rounds of 69 and 68 have put him position to become the first Malaysian to hold a full card on PGA TOUR Series-China.

“I feel great. I really stayed patient out there. I didn’t hit as close as I did yesterday, didn’t make as many putts, but I’m quite happy because I finished with three birdies – better than yesterday’s double bogey – so that’s good. I just got to look at things positively,” said Irawan, a former Asian Tour player and two-time winner on the Asian Development Tour.

“Now, I just have to play my game, just stay patient, hit fairways, hit greens and be as relaxed as I can be. I know the last day people get more nervous, and I know the pins will be tougher, but whatever happens, happens. That’s it.”

Irawan is seeking a new career direction after recovering from a moped accident in early 2016 that left him with metal plates in his shoulder. Now, he’s aiming for a full season in China and an eventual place on the Web.com Tour.

“I look at things positively in life, and after that accident I knew it was always going to be a good thing. There’s always a reason things happen, so it gave me time to re-think: Should I think about PGA TOUR China, should I stick to Asian Tour, what is my plan? It’s great that PGA TOUR China is back, and this is the road that I really want to take, for sure.”

After a one-year hiatus, PGA TOUR Series-China resumes in March with a 14-tournament schedule that starts with the Chengdu Championship at Luxehills International Country Club (March 15-18) and the Chongqing Championship at Poly Golf Club (March 22-25). Every tournament will offer RMB 1.5 million, a 25-percent increase over purse levels from 2016.