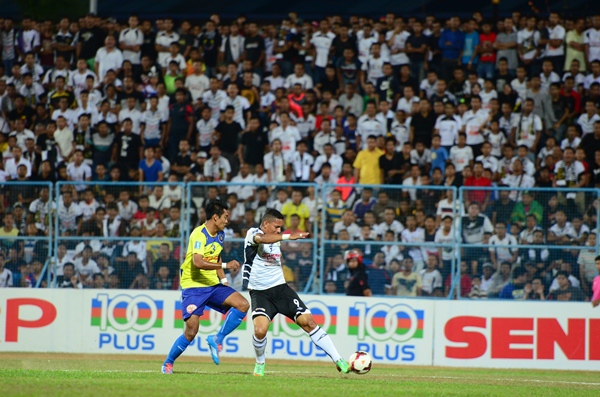 THE FA CUP semifinalists will be decided on Tuesday when the second leg quarterfinals are played and Pahang will play their first home match in the competition this season.

Pahang coach Ronald Smith welcomes the change of routine for his close knit ‘family’ that have spent more time travelling and hence the fatigue that has set in as was seen in the 2-0 defeat to Terengganu in a Super League match in Kuala Terengganu last night.

The Pahang team returned to Kuantan at 4am this morning – leaving soon after the Terengganu match.

“Tuesday’s return-leg quarter-final (against Police) will be our first Cup match at home,” said the England-born Australian.

Pahang’s FA Cup journey began with an away match against Perak (won 5-4 on penalties after a 2-2 draw) in the first round, followed by the second round match against Lions XII (2-1) at the Jalan Besar Stadium.

And not many know that several of the ‘fatigued” Pahang players took the field against Terengganu in Kuala Terengganu last night despite having flu. Among them were flankers R. Gopinathan and R. Surendran.

Terengganu won with goals by Mario Karlovic and Ismail Faruqi which sent the Turtles to the top while Pahang slipped to ninth in the 12-team Super League.

“This is the price you pay. When some gets the bug there are chances that others will also fall victim because we all do things together. It is hard to isolate a player when you have limited resources at your disposal. You got no choice and there is nothing you can do about.”

Smith was quick to admit that he “needs fresh legs” for the FA Cup match against Police.

“It is just bad luck that we had to play our FA Cup matches away. We were really off form against Terengganu. The players felt hapless against Terengganu who took the field without having played a mid-week match and were fresher,” added Smith.

Smith is keeping his fingers crossed that he will have the services of experienced players like Azamuddin Akil (ankle injury) and captain Razman Roslan (muscle strain) for the match against Police after the duo missed the Terengganu match.

Pahang seem to be the ‘unlucky ones’ even in the Super League, having played only two home matches at the Darul Makmur Stadium in Kuantan out of five matches played so far.

The two league matches played at home – were against Lions XII which the Elephants won 1-0 (it was also the Charity Shield match) and the 3-2 win over star-studded Johor Darul Takzim.