Home International WTCC drama at the Nordschleife as López doubles up 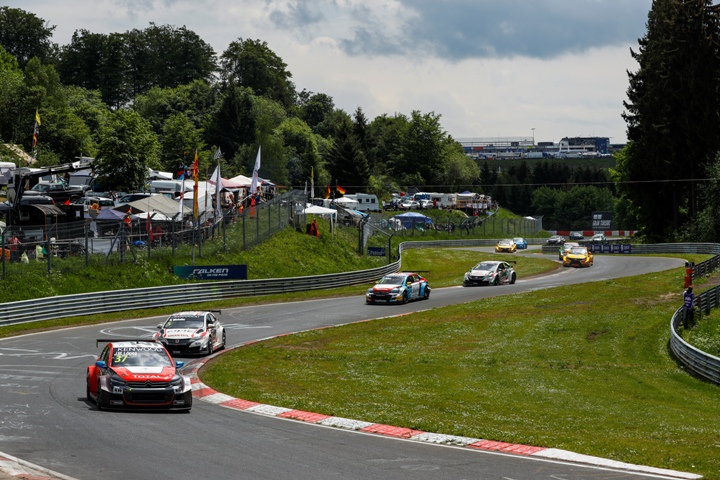 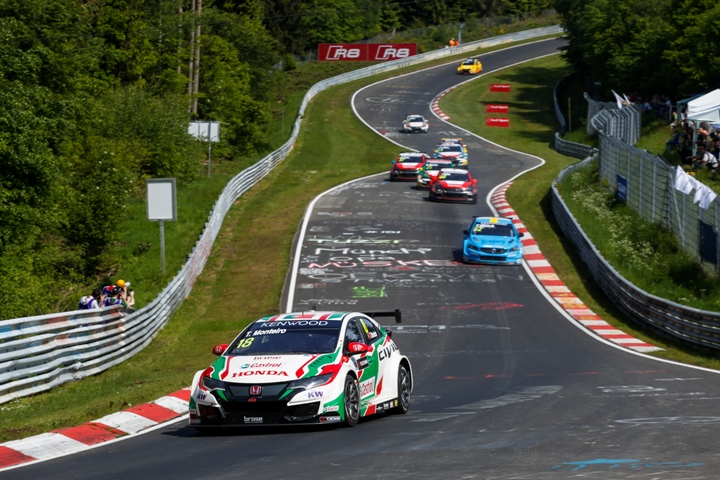 World champion wins twice but Monteiro and Muller crash out

José María López ruled the legendary Nürburgring Nordschleife by winning both encounters at FIA WTCC Race of Germany today. The Citroën driver charged through from ninth on the grid to claim the Opening Race laurels before converting his DHL pole position into victory number five of 2016 by taking the Main Race triumph.

Tiago Monteiro had been leading the Opening Race in his Honda only for a spectacular crash to put him out nearing the end of the final lap. Yvan Muller was also eliminated in the incident although both drivers were given the all-clear following medical checks.

Tom Chilton was a double winner in the WTCC Trophy and second and third overall in the two action-packed races. He also landed the TAG Heuer Best Lap Trophy – and a TAG Heuer watch – for his 8m47.586s charge around the 25.378-kilometre track. Norbert Michelisz was twice in the top three for the factory Honda team, while the works Polestar and LADA squads also scored.

Heading to the halfway stage of the season at the Moscow Raceway in Russia next month, López holds a 69-point championship lead over Monteiro with Rob Huff and Michelisz evenly matched.

OPENING RACE REPORT: LÓPEZ CHARGES THROUGH THE PACK TO LAND VICTORY
José María López picked up victory in the Opening Race after a dramatic final-lap crash eliminated Tiago Monteiro and Yvan Muller. Monteiro had led from pole position through the first two laps of the Nürburgring, the Citroëns of Muller and López worked their way up to second and third, helped by Thed Björk pulling out of second place at the end of the grand prix loop on lap two with a technical issue on his Volvo.

Muller tried a passing move on Monteiro at the end of the second lap, but the Honda driver stayed ahead as Muller briefly got two wheels on the grass. However, Monteiro would go off out of the lead on the final lap, hitting the barriers hard and ending up in the middle of the track. Muller was left with nowhere else to go and made contact with the Portuguese, while López managed to sneak through into the lead. López took victory by just over half a second in front of fellow Citroën driver Tom Chilton, who had briefly passed the double world champion on the grand prix loop on the last lap. Though he missed the outright win, Chilton did take the WTCC Trophy victory.

Norbert Michelisz completed the podium for Honda, with Rob Huff finishing fourth from P16 on the grid. Having been second early on, Mehdi Bennani ran wide and slipped back into the pack, eventually finishing fifth ahead of LADA drivers Hugo Valente and Gabriele Tarquini. Fredrik Ekblom (Volvo-Polestar) and Nicky Catsburg (LADA) were next, while Sabine Schmitz took P10 – and a world championship point – on her return to WTCC action at her home circuit. Tom Coronel had been fifth when he went off on the final lap, ruling him out of starting third on the grid for the Main Race.

MAIN RACE REPORT: HIGH FIVE FOR NORDSCHLEIFE KING LÓPEZ
José María López doubled in Germany by winning the Main Race at the Nürburgring Nordscheife for his fifth victory of the season after a battle with Norbert Michelisz. Honda driver Michelisz, promoted to the front row of the grid, made a better start than pole-sitter López to take the lead down the inside of Turn 1. López quickly responded though and reclaimed first place around the outside of the Schumacher S. He led by three seconds at the end of the first lap, but that advantage was slashed to less than a second at the end of lap two.

The gap between the Citroën and the Honda would come down again on the third and final tour but López held on to win by 0.435 seconds. Tom Chilton was again the top WTCC Trophy driver and again on the outright podium in third. Rob Huff got very close to his fellow Briton on the final lap – even making contact – but had to settle for fourth. Mehdi Bennani passed Nicky Catsburg to finish fifth.

Polestar Cyan Racing enjoyed a strong race, with its two drivers, Fredrik Ekblom and Thed Björk, working their way up to seventh and eighth respectively, past the LADAs of Gabriele Tarquini and Hugo Valente. Sabine Schmitz finished just outside the points on this occasion in P11 despite a puncture on the final lap.

“The cars are very close so it’s a good result,” said Honda team head Alessandro Mariani. “We thought before we could push each other on the long straight, but on the previous part of the circuit it’s not easy to stay close to the car in front, so we joined the cars before the last straight, which we did, and it was a good strategy and a good job. The guys did a good job and we took the opportunity.”

Uniquely, WTCC MAC3 was run over one lap of the 25.278-kilometre Nürburgring Nordschleife rather than the usual two, which put even more pressure on the drivers not to make a mistake by cracking under pressure. LADA was unable to take part in WTCC MAC3 after one of its three cars, that of Hugo Valente, was damaged in an accident in the preceding qualifying session.

José María López (Opening Race and Main Race winner): “Of course if there is a place where you want to win both races, you want to win everywhere of course, but here it’s really special. I was very cautious with the celebrations. I like to think you can be a good winner and a good loser and today the first race I take the profit of an accident otherwise it was going to be very difficult. I couldn’t take advantage of the slipstream because Yvan was taking the slipstream of Tiago so even if I was quicker my chances were disappearing because it was very difficult. I’m really happy to have the first win and it’s an extremely important boost for the championship for me. I’m also really happy Tiago and Yvan are okay.”