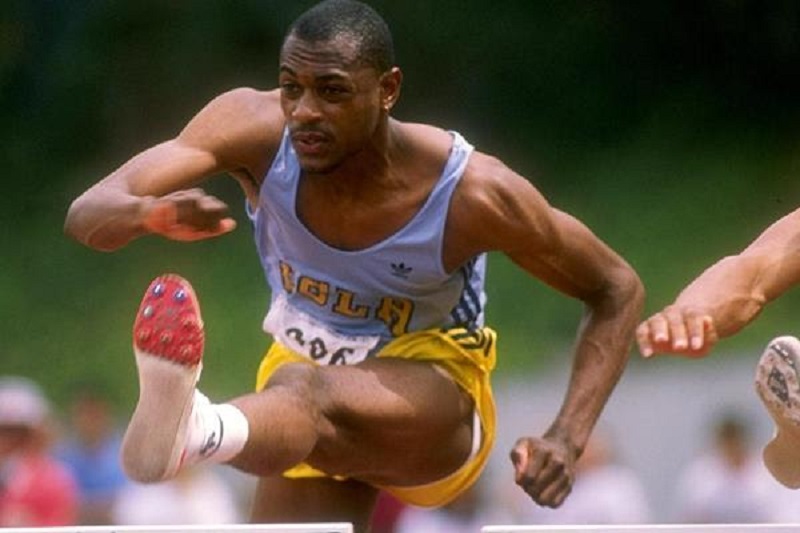 Kevin Young, who has held the men’s 400m hurdles world record since 1992, turns 54 today. To mark his birthday, we are delighted to announce that Young has generously donated to the Heritage Collection the UCLA singlet which he wore when running into the international spotlight in 1988.

Young had signalled his talent on the international circuit in 1987, winning in Lausanne in a personal best of 48.15 but it was the following year when he made more substantial strides. In his fourth year as a student at UCLA, he broke 48 seconds four times.

The breakthrough came on 3 June at the NCAA Championships in Eugene when Young lowered his personal best by 0.3 seconds to 47.85. It was a performance which was rewarded with a cover photo of the July 1988 edition of Track & Field News, with the headline “Kevin Young – UCLA Hurdle Ace”.

Again, wearing the same singlet which he has donated to the Heritage Collection, Young was a member of the UCLA quartet which 24 hours later clocked 2:59.91 in the 4x400m relay, the first collegiate quartet ever to break three minutes in the event.

The following month Young improved to 47.72 in Indianapolis to secure the third spot on the USA squad for the Olympic Games in Seoul. Then on 17 August he came within 0.02 of that lifetime best in a dead heat with Danny Harris in Zurich. The two men were inseparable in the photo-finish, each credited with 47.74. Then in the Seoul final, Young clocked 47.94 to finish just outside of the medals.

“I’m honoured to contribute my UCLA singlet to the World Athletics Heritage Collection to help tell the history of our sport to generations of fans to come,” Young said. “That 1988 season was an important part of my development to becoming an Olympic and world champion. I’d broken through the previous year, but it was my performances in Eugene which signalled I was a true contender for global glory.”

It is also a performance which seemed unapproachable until last year. In 2019, Karsten Warholm (46.92), Abderrahman Samba and Rai Benjamin (both 46.98) demonstrated that Young’s historic world mark was living on borrowed time.

On 14 August 2020, when attending the Wanda Diamond League meeting in Monaco, Young took the opportunity to hand over his UCLA singlet to the Heritage Collection. On that night he witnessed a scintillating 47.10 solo run from Warholm. In Stockholm nine days later, the Norwegian, despite clipping the last hurdle, came tantalisingly close to Young’s world record with 46.87. That improved the second fastest performance of all-time which he already held. More recently, Warholm, at 24 already a two-time world champion, continued to illustrate strong form, clocking 47.08 at Berlin’s ISTAF meeting.

Speaking on the eve of the Rome Diamond League meeting, which will witness Warholm’s latest attempt at the record, Young said, “It’s about time the record went. Warholm, along with Samba and Benjamin, are more than capable of breaking, perhaps even destroying my record. What a lot of people forget is in Barcelona I knocked over the last hurdle. They just need to judge the pace of the race better.” – World Athletics Heritage