Home International Zulfahmi confident of top 10 finish despite crash, Hafiq closes in on... 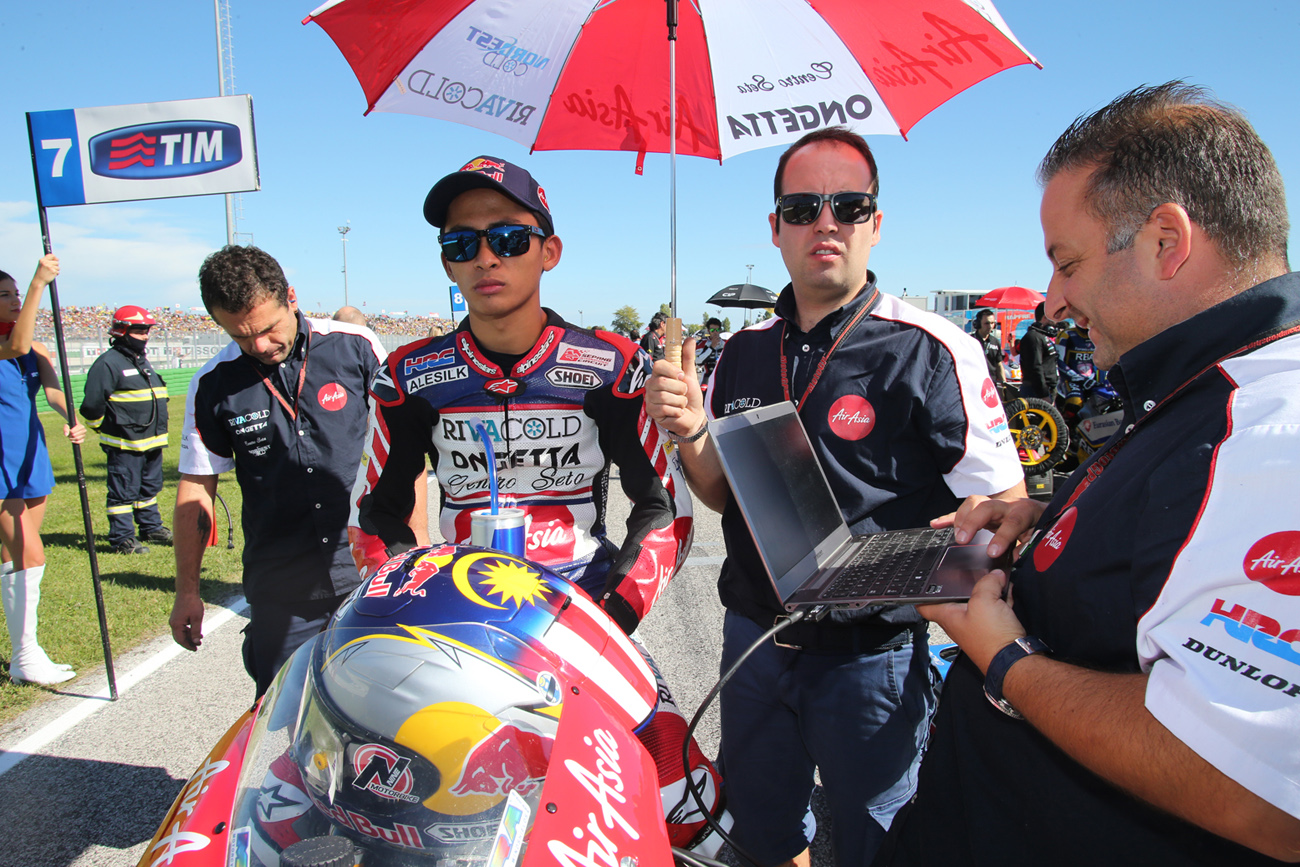 SEPANG – Despite taking a tumble which affected his position in today’s qualifying session, Zulfahmi Khairuddin is confident he will be able to turn up the power and finish within the top 10 in the Shell Advance Malaysian Motorcycle Grand Prix Moto3 race tomorrow afternoon.

While Zulfahmi recovered and ended up in 22nd spot today, compatriot Hafiq Azmi enhanced his chances of making the points for the very first time when he was placed 16th, his best result so far in qualifying this season. Wildcard entry, RamdanRosli meanwhile surprised with a 21st placing in the qualifiers this afternoon.

Zulfahmi’s confidence is high mainly due to the good lap time recorded earlier in the free practice session in the morning where he was timed at 2:13.918secs and was placed 11th. In the actual qualifiers this afternoon, Zulfahmi crashed early in the session but managed to get back in the last nine minutes.

“There was a lot of traffic in the first lap of the qualifying. A few of us waited at the back straight and when reached the first corner, I lost grip in the front tyre and fell. The mechanics managed to repair the machine and I came on with nine minutes left,” said the 23-year-old Ongetta-Airasia rider.

“I managed to complete three full laps and just when I got faster in the third lap, my brake gave me problems. I was definitely faster than the previous two laps,” said Zulfahmi, who had to settle for an official qualifying time of 2:15.498.

Zulfahmi admitted that he expected to be in the 30th spot or more. “But when I reached the pit, I was surprised I was in 22nd spot, which was not as bad as I thought. I am very positive about the race, I have very good pace and good setup. This morning, we were two seconds faster than qualifying. I hope to be among the front group tomorrow. I am confident with the bike setup and with the wide track, I think it is not a problem to fight for a good position,” said Zulfahmi, who added that his personal target tomorrow was a top 10 finish.

Meanwhile, Hafiq Azmi, who has yet to score any points this season, turned in a creditable performance to finish 16th. The SIC-AJO rider, whohad a best lap time of 2:14.413s, said:. “It was a bit of a struggle earlier in the morning but the team worked on the bike and things improved in the afternoon. I am very happy with the qualifying today as it’s my best so far in the world championship. I hope it will be better tomorrow.”

“My target is to finish in the top 15 so I will be able to get my first points of the season. I will be very happy to be in the points. But in a race, anything can happen so I will concentrate on the race. I want to get a good start, be strong in first two laps and then take it from there.”

Meanwhile in the Moto2 category, Hafizh Syahrin from the PetronasRaceline Malaysia team, was 22nd in today’s qualifying session. He clocked a best lap time of 1:34.379.