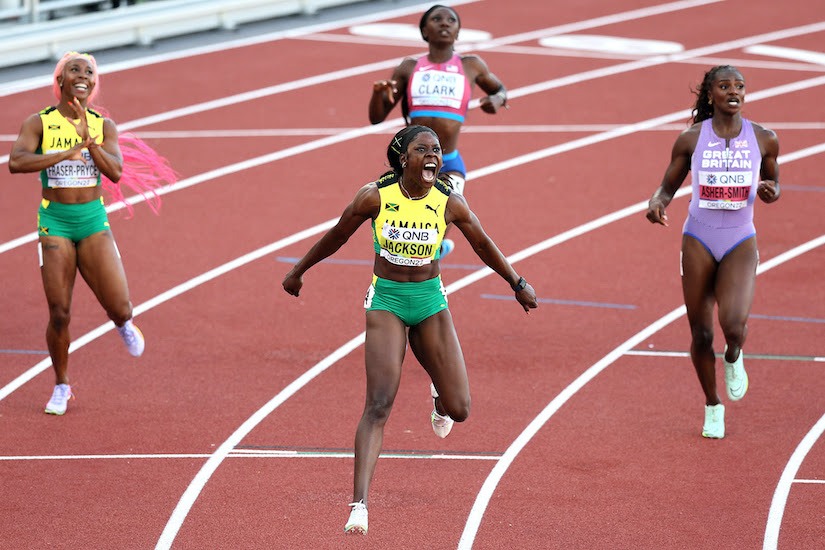 On an evening when two sporting legends were sitting trackside at Hayward Field – Tommie Smith and John Carlos – the current generation of sprinters served up spectacular displays of 200m running at the World Athletics Championships Oregon22 on Thursday (21).

Noah Lyles of USA and Shericka Jackson of Jamaica both destroyed their rivals with the best performances of their careers, and some of the greatest 200m displays of all time, sizzling to respective times of 19.31 (0.4m/s) and 21.45 (0.6m/s).

Earlier in the night, Carlos and Smith sat beneath the stands at Hayward Field and spoke glowingly about the current generation of sprint stars. “I like Mr Lyles,” said Carlos. “I looked at his career, I looked at his heart. He’s a fighter.”

Of course, the pair have more than that in common with the 25-year-old. At the US Olympic Trials last year, Lyles had worn a black glove – minus the fingers – and raised his fist in the air as he was introduced for the 100m, a nod to Smith and Carlos’s Black Power salute on the 200m podium at the 1968 Olympics.

“We have a good connection,” said Lyles. “We vacation at the same spots and have had plenty of great conversations. I remember something (Carlos) said to me once: ‘A shy man will never eat, he’ll just starve to death’. I was already hungry, but I got real hungry after that. I said I’m going to risk it all, I’ll go out there and speak my truth about Black Lives Matter.”

In Lyles, Smith sees an athlete who’s able to perform while using his platform to fight for equality –the same way they did five decades prior. The message Smith wanted to put across tonight?

“What can you do to create that avenue of equality?” he said. “We have to stand up for what we believe in so the younger generation will understand and have a purpose.”

Before the men’s 200m final, Smith and Carlos were introduced to the crowd and they received a rapturous reception, the love for them running just as deep as their love for the sport.

“Track is the grandfather of all sports,” said Carlos. “Track and field was there before any of them.”

And in Lyles’ and Jackson’s performances, the sport showed its modern-day capacity to electrify an audience. – World Athletics