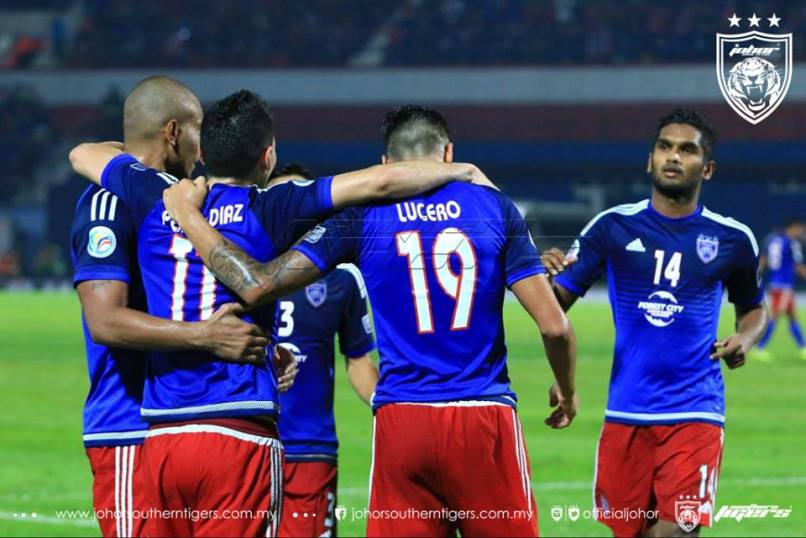 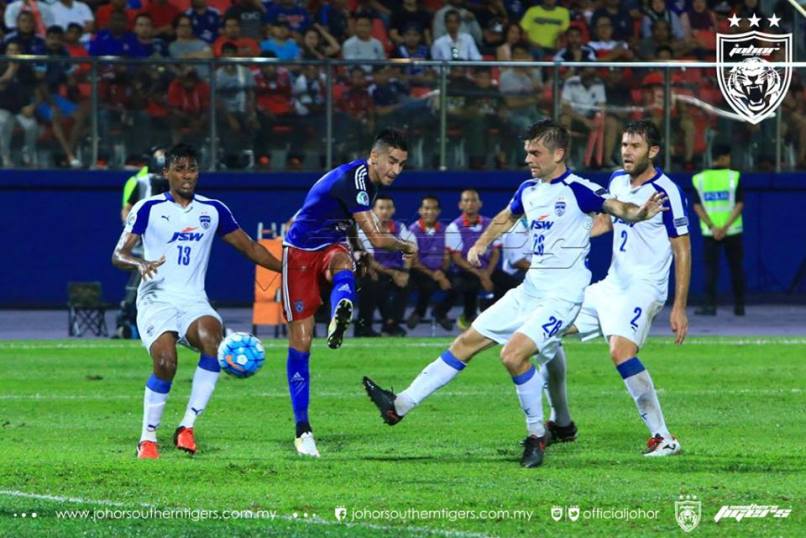 # JDT will miss Diaz, Lucero and Amri in the return-leg through suspension

Defending champions Johor Darul Takzim shot themselves in the leg with a frustrating 1-1 draw with JSW Bengaluru of India in the first-leg AFC Cup semi-final at the Larkin Stadium in Johor Bahru on Wednesday.

Bengaluru now not only take a crucial one away goal but left JDT crippled with three of their key players suspended for the second-leg on Oct 19. Argentine scoring machines Jorge Pereyra Diaz and Juan Martin Lucero together with national skipper Amri Yahyah will sit out the match.

The trio went into Jordan referee Adham Mohammad Makhadmeh’s book and their second booking in the tournament rules them out, leaving a big gap for the crucial return-leg.

And Bengaluru chief coach Alberto Roca fired the first salvo after the match and said in a live interview on Fox Sports that his team will not settle for a scoreless draw at home which will be enough to take them through.

“A scoreless draw would be enough but we are not thinking of that. Instead we will be going for a win. The 1-1 draw at Larkin is a morale booster for the team and the players are confident of delivering at home.

“We had a very good game at Larkin and we would have won the match with a little bit of luck.”

Hero for Bengaluru was their goalkeeper Arminder Singh who once again put up a sterling show between the post to deny JDT on several occasions. It was Arminder’s reflexes and his good reading of the game that turned out to be a night of frustration for the Southern Tigers.

Diaz, gave the 18,000 home fans plenty to cheer when he rose high at the far post to head home a Safiq Rahim corner. JDT 1-0 after 53 minutes and the fans were hoping for more goals.

Instead JDT were left shell shocked just four minutes later – thanks to some sloppy marking and defending – when Eugeneson Lyngdoh fired an unstoppable screamer from 30 metres that sent the JDT net dancing as goalkeeper Izham Tarmizi Roslan stood rooted.

JDT who defeated Bengaluru 3-0 in a Group H match in the same competition earlier this year. The visitors showed what disciplined defending is all about coupled with Arminder’s confidence that was boosted after making a couple of saves.

JDT have only themselves to blame for the draw at Larkin but it is not the end of the Malaysian Super League champions who have depth on the bench to replace the suspended trio.

For JDT coach Mario Gomez his work begins now and will have to work out his strategies. Without doubt Diaz and Lucero have left a big vacuum. The Southern Tigers will have to plug the vacuum with the right players from their big squad.