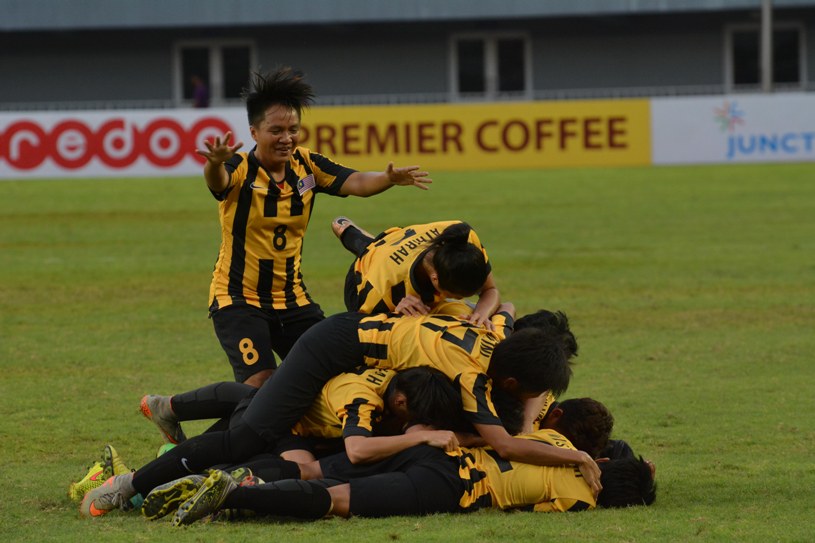 What was supposed to be a walk in the park for Myanmar in the AFF Women’s Championship here almost turned out to be a nightmarish run for the hosts tonight.

Malaysia served up a gutsy performance against a stronger and more experienced Myanmar team. They snatched the lead through Dadree Rofinus(18th) but Myanmar replied with a penalty from Khin Moe Wai (45th) and Win Theingi Tun (80th).

Although they lost, the awesome performance from the girls were phenomenal. After falling behind, Myanmar desperately pushed up to score.

But the Malaysians and especially goalkeeper Asma Junaidi, who was the best player on the pitch tonight saving numerous attempts, fought furiously to defend their precious goal.

The penalty was unfortunate, but the girls did not lose heart and continued to contain their rivals. In their haste to stop the speedy Myanmar players, two players (Nur Athirah Farhanah and Nur Haniza) were injured and replaced.

After whipping Timor Leste 17-0 two days ago, Myanmar were all primed to deliver another shattering performance against the Malaysians today. But against all odds, the Malaysians silenced the almost 20,000 fans in the 18th minute with a solid shot that sailed over the Myanmar keeper Mya Phu Ngon and landed in goal.

Myanmar suddenly became frantic and lunged forward to get back into the game. They scrambled for the equaliser which eventually came in the 45th minute when the ball hit the hand of a Malaysian player. Khin Moe Wai easily converted.

The Myanmar players came on after the break and threw everything they had. Virtually camped in the Malaysian half, they made attempts from all angles, but the Malaysian continued to frustrate their rivals.

The hosts were under presssure, especially with the huge crowd that turned up to watch the game. To their credit, the Myanmar strikers never gave up and were rewarded for their persistence with a winning strike from Win Theingi Tun.

The defeat was Malaysia’s second here which means they are out of the running for a semifinal spot. They will face Timor Leste in their last group match on Sunday.