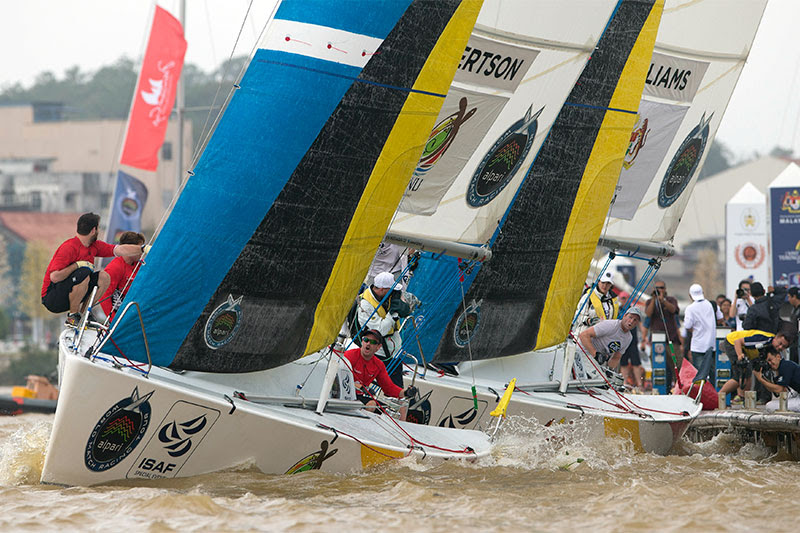 Organisers of the Monsoon Cup Malaysia – the final event of the 2014 Alpari World Match Racing Tour – have confirmed today the event will be hosted from 10-14 February 2015 replacing the earlier published dates of 26-31 November 2014. The 10th Anniversary of the event will also be staged at a new venue in Johor, the southern most state of Malaysia. Details of the venue will be released shortly.

The change of dates for the Monsoon Cup Malaysia is part of an expansion of the event by Kuala Lumpur based event organisers Innovatige in partnership with the Malaysian Ministry of Youth and Sports, the NSA (National Sports Council) and MYA (Malaysian Yachting Association).

The Monsoon Cup has now been split into two separate events, Monsoon Cup Terengganu – a regional qualifier event to be held in Pulau Duyong, Terengganu from19-22 November 2014, and the Monsoon Cup Malaysia – the World Championship grade event and final stage of the Alpari World Match Racing Tour in Johor from 10-14 February 2015.  The winner of the MC Terengganu will qualify for entry to the final in Johor.

The creation of the two separate Monsoon Cup events is a further development of the highly successful initiative to grow the sport of match racing in Malaysia. Last year, organised by Innovatige, the National Sports Council announced a comprehensive sailing development programme with the re-introduction of the Liga Layar Malaysia (LLM), a series of eight match racing events around Malaysia, and the Belia Belayar programme. a grassroots programme aimed at introducing youth sailors to the sport. So far this year, the Belia Belayar has introduced over 4,500 youth sailors to the sport via the government-backed programme.