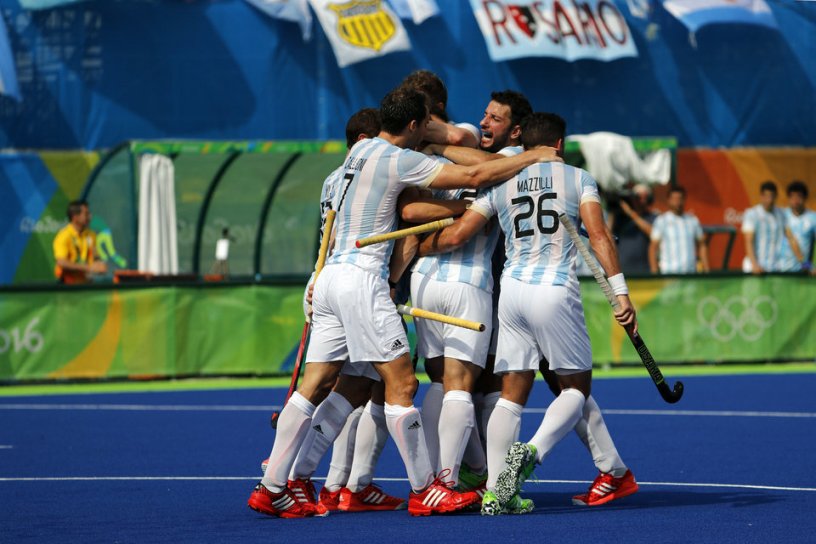 Argentina, Belgium, the Netherlands and Germany have all sealed their respective places in the Semi-Finals of the men’s hockey competition at the Rio 2016 Olympic Games following a highly dramatic day witnessed by over 10,000 people at the Deodoro Hockey Centre.

Argentina’s Los Leones battled their way past Spain to secure their place in the final four, where they will go head-to-head with reigning Olympic champions Germany – who produced a staggering fight-back from 2-0 down to defeat New Zealand – for a place in the gold medal match.

Belgium’s Red Lions overcame the challenge of Asian champions India to reach the Semis, and now face a meeting with European champions Netherlands, who dismantled reigning World champions Australia with a stunning 4-0 score-line.
The Semi-Finals will take place on Tuesday 16 August, with the Argentina versus Germany match getting underway at 12:00 Brasilia Time (GMT / UTC -3) before Belgium and Netherlands take to the field at 17:00.
The first Quarter-Final to be played on Sunday saw Pool A runners up Spain (FIH Hero World Ranking: 11) fall to a 2-1 defeat against Pan American champions Argentina (WR: 7), who finished third in Pool B.
Argentina’s Los Leones opened the scoring late in the first quarter thanks to a wonderful penalty corner effort from Gonzalo Peillat, a lead that they held until three minutes from the end when Pau Quemada levelled and put the match on the brink of a shoot-out.
However, Spanish hearts were broken when Juan Gilardi converted a late penalty stroke to send his team into the last four where they would face the winner of Germany versus New Zealand, the day’s final match.
Pool A winners Belgium (WR: 6) were the next team to book their Semi-Final ticket, battling their way to a 3-1 win over Pool B’s fourth placed finishers India (WR: 5), the champions of Asia.
Eight times Olympic gold medallists India made a strong start to the match and took the lead courtesy of Akashdeep Singh’s 15th minute tip-in, but the match was turned on its head in the third quarter thanks to a brilliant double strike from Red Lions star Sebastien Dockier.
Tom Boon smashed home a third early in the fourth quarter and it proved to be the killer blow, ending India’s hopes of Olympic glory at Rio 2016.
Belgium’s opponents in the Semi-Finals would be the winner of the day’s stand-out fixture, as Pool B runners up Netherlands (WR: 2) took on the mighty Australia (WR: 1), who finished a lowly third in Pool A. The European champions produced a sensational performance to thrash the reigning World, Champions Trophy and Hockey World League title holders 4-0, giving the Dutch a feeling of redemption following their 6-1 World Cup final defeat at the hands of the Kookaburras on home soil in The Hague two years ago.
The dazzling Dutch opened the scoring in the first minute thanks to a backhand rocket from Billy Bakker, who soon turned provider for Bob de Voogd to make it 2-0 just before half time. Valentin Verga scored a sublime third just after the break when he volleyed in a pass from the outstanding Jeroen Hertzberger, before penalty corner king Mink van der Weerden completed the rout eleven minutes from time to eliminate the pre-tournament favourites.
The fourth Quarter-Final was unquestionably the most dramatic of the day, with Pool A’s fourth placed team New Zealand giving Pool B winners Germany a huge scare before eventually suffering the most painful of defeats.
The Black Sticks took a shock lead against the Beijing 2008 and London 2012 Olympic champions when the impressive Hugo Inglis scored a fine solo goal three minutes into the second quarter. Remarkably, Shea McAleese doubled the New Zealand advantage when he touched home a penalty corner with just eleven minutes of the match remaining.
The last ten minutes were utterly thrilling, with Germany piling on the pressure before eventually going for broke by replacing goalkeeper Nico Jacobi with an outfield player with six minutes remaining. The tactic worked, with team captain Moritz Fürste scoring two penalty corner drag-flicks to restore parity before Florian Fuchs netted a brilliant winner with just 1.4 seconds on the clock.
The Olympic hockey action continues on Monday (15 August), with the Deodoro Hockey Centre playing host to the Quarter-Finals of the women’s competition. Oceania rivals New Zealand (WR: 4) and Australia (WR: 3) take to the field at 10:00 Brasilia Time (GMT / UTC -3) before USA (WR: 5) and Germany (WR: 9) go head-to-head at 12:30. Great Britain (WR: 7) face Spain (WR: 14) at 18:00, with reigning Olympic and World champions the Netherlands (WR: 1) taking on Argentina (WR: 2) at 20:30 in a re-match of the gold medal game from London 2012.
Complete information about the hockey competitions at the Rio 2016 Olympic Games can be found on the official website:rio2016.com/en/hockey
The Olympic hockey events take place from 6-19 August at Rio’s purpose-built Deodoro Olympic Park, and will feature the 12 men’s and 12 women’s international teams that qualified through the Hockey World League and Continental Championships.
Tickets for both events are still available and can be purchased here