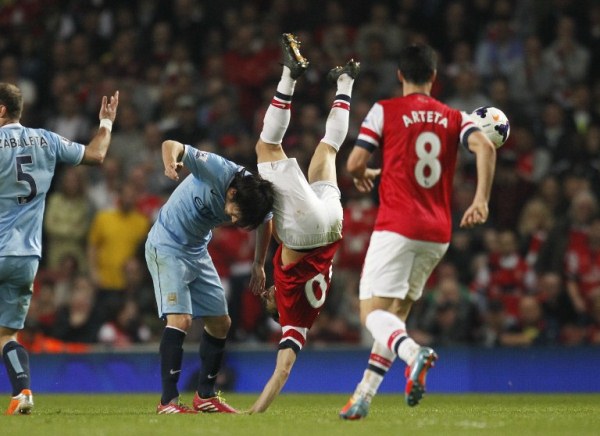 MANCHESTER CITY squandered an opportunity to replace Chelsea at the Premier League summit after being held 1-1 by an improved Arsenal side.

Chelsea’s 1-0 loss at Crystal Palace meant that victory at the Emirates Stadium would have sent City top on goal difference, but they remain third after David Silva’s opener was cancelled out by Mathieu Flamini.

The day’s events mean that five points now separate leaders Chelsea and fourth-place Arsenal, who produced a much more determined display after last weekend’s 6-0 demolition by Jose Mourinho’s side.

Chelsea’s advantage is paper-thin, however, as City, who trail them by two points, have two games in hand, while second-place Liverpool will go top if they win at home to Tottenham Hotspur today.

“I don’t know if the word is disappointed,” City manager Manuel Pellegrini told BBC Sport. “This week we have played away at Manchester United (winning 3-0) and Arsenal, and we have four points from six.

“All of us want to win all our games, but Arsenal are a very good team here and they are also fighting for the title.”

After Tomas Rosicky had seen an early penalty appeal turned down for Arsenal, City went ahead in the 18th minute when Silva prodded in after a shot from Edin Dzeko came back off the post.

Arsenal centreback Per Mertesacker inadvertently almost doubled City’s lead early in the second half, the ball trickling inches wide of goal after goalkeeper Wojciech Szczesny had pushed a Jesus Navas cross against him.

Within moments Arsenal were level, as Lukas Podolski was granted space to cross from the left and Flamini flew in to steer a half-volley into the bottom-right corner in the 53rd minute.

“When you look at the results today, everything can happen,” said Arsenal manager Arsene Wenger.

“We are of course far, maybe, from the top, but we have to continue with this spirit. You never know.”

Chelsea manager Mourinho had admitted defeat in the title race after his side slumped to a shock loss against relegation-threatened Palace at a sun-soaked Selhurst Park.

A 52nd-minute own goal by Chelsea captain John Terry settled the game, prompting Mourinho to concede: “We depend too much on other results.

It was the second surprise loss in the space of a fortnight for Mourinho, whose side were beaten 1-0 at Aston Villa on March 15, and enabled Palace to pull five points clear of the relegation zone.

Earlier, Wayne Rooney inspired Manchester United to come from behind and beat Villa 4-1 in a game that witnessed a fresh protest against United manager David Moyes.

A small plane towing a banner that read ‘WRONG ONE – MOYES OUT’ flew over Old Trafford shortly after kick-off and the under-fire former Everton manager then saw his side fall behind to an Ashley Westwood freekick.

However, Rooney scored twice before halftime, with Juan Mata and Javier Hernandez adding further goals as the under-performing champions inched to within 10 points of the top four.

Moyes had received a warm reception from the United fans prior to kick-off and he said: “Every supporter I bump into in the street or any dinner I go to, they’re all talking about (how) they know exactly what it’s like at Manchester United. And I’ve got to say, the crowd inside Old Trafford today showed that.”

A breathtaking lob from wide on the right by Morgan Amalfitano put West Brom ahead in the second minute and Graham Dorrans added a second goal seven minutes later.

A 30-yard Jordon Mutch strike and a Steven Caulker header brought Cardiff level, only for Thievy Bifouma to restore West Brom’s lead in the 94th minute, but Daehli smashed home an equaliser with the last kick of the game.

Swansea City eased their own relegation fears by winning 3-0 at home to Norwich City, while Southampton crushed Newcastle United 4-0 and Peter Odemwingie gave Stoke City a 1-0 win over Hull City.