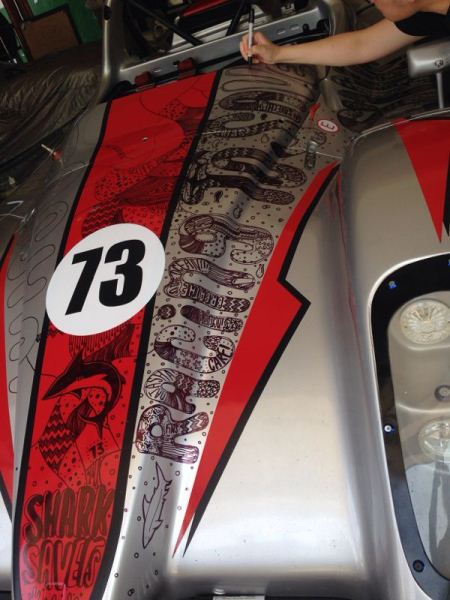 TODAY kicked off the start of Malaysia’s national racing championship, the Malaysia Super Series at Sepang, as a support race for the Formula One Petronas Malaysia Grand Prix, and local hero Natasha Seatter was in prime spot to take the chequered flag before a broken driveshaft forced her to retire.

Starting third on the grid was the second best spot for 21 year-old Natasha as this put her on the racing line with extra grip from the rubber laid down yesterday. Taking advantage of this position Natasha was able to keep close behind pole sitter Phillip Callow as they crossed the start line. Preserving her tyres during qualifying had paid off.

Sprinting off from the green lights Natasha was met by an over eager Adrian D’Silva who, in second place stormed across the track forcing Natasha as wide as he could, narrowly missing the pit wall. Not being intimidated, Natasha kept to her line and was able to pass D’Silva’s Ferrari on the inside of turn one, taking second position, with Phillip Callow holding the number one spot.

From that point on Natasha drove a very consistent and controlled race keeping Callow within one second, and pressuring him into several slides around turns 13 and 14. In the process Natasha clocked the fastest lap time with a 2:07.700 seconds, two seconds faster than her qualifying time and her personal best around the Sepang International Circuit.

Pulling away from the rest of the field Natasha was hot on the heels of Callow, knocking on the door for first place when she suddenly pulled off the circuit with a driveshaft problem.

Although a bitter end to her first race of the season, it has proved that Natasha definitely has what it takes to challenge for the championship win, having led the much more powerful Ferraris, Lamborghini’s and Aston Martins in the field.

Natasha heads into race two on Sunday at 11:30am starting from the back of the field, though she is confident that with her pace she will be able to challenge for a top finish.

“I have mixed feelings about this morning’s race. I’m very pleased with how I drove and felt in the zone. The car felt fast and I was in complete control, and very happy to see I drove the fastest lap and my own PB. But it’s annoying, not only because of the driveshaft, but because Phillip spun with two laps to go which meant I could have won,” said Natasha.

“I could see Phillip sliding in front of me and knew I just had to keep the car close if I was to take the win. We improved a lot from practice and I’m confident that with the new driveshaft and fresh tyres, I can challenge again tomorrow.”

Meanwhile, in conjunction with “I’m FINished with Fins” campaign, Natasha’s Radical SR8 has been transformed into a unique work of art, hand drawn by young Malaysian artist Will Sii, a graduate of The One Academy.

This artwork is unique and a first of its kind as it is hand drawn without any decals.

Together with Asia Pacific Director of Sharksavers Asia, Jonn Lu, Will drew the slogan “Natasha, Racing to Save the Sharks.”

Inspired by the beautiful creatures in the ocean and elements of Natasha’s life and her racing career, artist Will Sii took some 10 hours to complete the job.