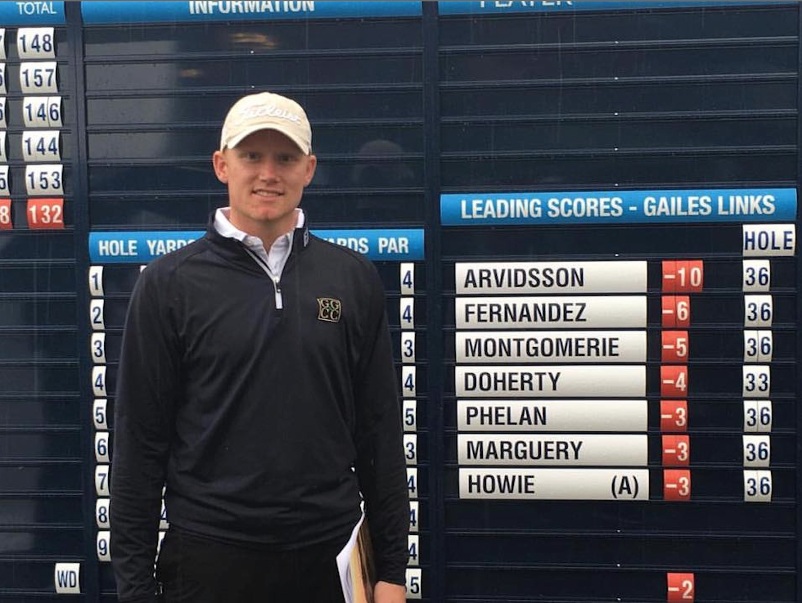 Singapore’s Mitchell Slorach and Oskar Arvidsson of Sweden will take a one-shot lead into the all-important final round of the PGM MIDF TPC Kuala Lumpur Championship with overnight leader Danny Chia of Malaysia in close pursuit.

Arvidsson, who made his Major debut at The Open in July, tied the day’s lowest score of a four-under-par 67 to share the third round lead with Slorach (68) on 11-under-par 202 total at the TPC Kuala Lumpur on Friday.

Chia, who held the lead for the first two rounds, slipped to third place following a 72 while countrymen Nicholas Fung and Gavin Green signed for 67 and 68 respectively to share fourth place on 204 at the RM200,000 (approximately US$46,600) event.

Thailand’s Panuwat Muenlek, chasing for a third win of the season, sits a further shot back in sixth place following a 68 in what is the Asian Development Tour’s (ADT) final stop in Malaysia this season.

Starting the round with a four-shot deficit, Arvidsson fired seven birdies against three bogeys to put himself in prime position for a maiden win on the ADT.

“I putted well. I had a couple of long putts and I made some good par putts too. The longest one was a 30-footer birdie putt on 13. My ball striking was on point and I hope it stays the same tomorrow,” said the 25-year-old Swede, who is playing in his second season on the ADT.

Arvidsson was thrilled when he earned his Major debut at The Open after coming through the final qualifiers at the Glasgow Golf Club’s Gailes Links in June.

“It was a great experience playing in The Open. It was fun seeing the top golfers in the world, especially the ones who you grew up watching. The season’s been tough so far but I think it’s getting better now and I am heading in the right direction,” added the Swede.

Like Arvidsson, Slorach is also chasing for a career breakthrough win. “I enjoyed my round although I was disappointed to lose my momentum on the last hole where I three putted for bogey. I hit my wedges good and I made some good putts. Overall, it was a good round,” said the 28-year-old Singaporean.

“I got off to a superb start with three birdies in my opening four holes and I sank a 35-footer for birdie on seven. It’s been awhile since I last played in the final group. I just want to keep it the same for tomorrow. I will continue to play with no expectations,” added Slorach, who traded eight birdies against five bogeys.

The winner of the PGM MIDF TPC Kuala Lumpur Championship will take home a prize purse of US$8,721 as well as six Official World Golf Ranking (OWGR) points. The top six players and ties will also receive OWGR points based on a sliding scale.

Players who wins three events in a single season on the ADT gets playing rights on the premier Asian Tour for the remainder of the same season. Panuwat, Green and Sweden’s Oscar Zetterwall have already won twice on the A DT this season.