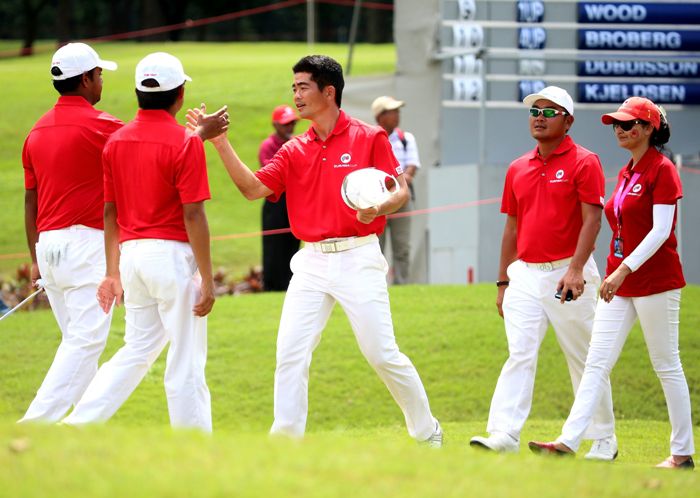 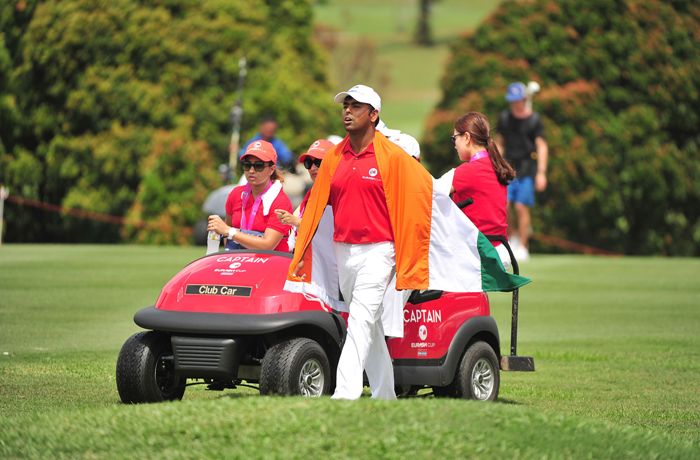 Team Asia members believe they can become a strong force in team golf in years to come after being handed a match play lesson from a dominant Europe who comfortably won the EurAsia Cup presented by DRB-HICOM on Sunday.

Despite being outscored 18 ½  to 5 ½ by a Darren Clarke-led Team Europe at Glenmarie Golf and Country Club, India’s Anirban Lahiri said Asia should not feel deflated despite the big loss.

Lahiri, who defeated Shane Lowry 2&1 in the singles for his lone point of the week, said the lack of match play experience was evident as Europe claimed the EurAsia Cup victory after the inaugural edition had ended in a 10-10 tie two years ago.

“I don’t think there was a big difference in the overall quality. We obviously played a very strong European Team and they played really well,” said Lahiri, the newly-installed Asian Tour number one.

“But I think all of us here are on the team because we are very capable players. We have the talent, the potential and the credentials.”

The 28-year-old Indian believes Asia will only get better with more match play opportunities like the EurAsia Cup.

“We’re a very young team when it comes to team golf. We have not played many team events. The Europeans have over 60 years of experience which they have learned from. They have become a powerhouse in team golf as the Ryder Cups have shown.

“They have learned from their experiences, from their mistakes, and I think we are in a similar situation where we need to learn and improve, It’s a matter of learning, and building on this aspect, which has actually been missing from Asian golf,” he said.

Clarke, who will also captain Europe in the Ryder Cup in September, agreed with Lahiri’s assessment.

“I think when you grow up playing a lot of match play as we do in Europe, all of Europe we do, it’s an art of the game. These guys all sitting up here, they have learnt that art of the game. Maybe a few of the younger guys have picked up a few more finer points of that game this week, but it is something that you learn, and you only learn it through playing it more and more,” said Clarke.

“And this is match play at the highest level of the game. This is professional match play, where margins are so fine. So you’ve got to understand what you need to do to win. Doesn’t matter how you play; you can play awful, doesn’t matter. You’ve just got to play slightly better than your opponent. Look them in the eye and play better than him, and these guys up here know how to do that.”

Team Asia captain Jeev Milkha Singh said early preparation for the continent would be key to turning their fortunes around when the next EurAsia Cup returns to Malaysia in 2018.

“I think we need to follow the same process as The European Tour. We’ve seen it for years now that they are the best team in the world in match play. They start their preparation two years before any team event or a year before I think we need to do exactly the same,” said Singh.

Korea’s K.T. Kim, who secured a 3 & 2 win over Austria’s Bernd Wiesberger, conceded Asia was outplayed but believes the team can become stronger in the near future.

“Overall, we can’t deny they have a better team. Look at their world rankings and obviously it’s a stronger team. So I think that’s where their advantage lies,” he said. “But having said that, we’ll prepare better for the next EurAsia Cup and see what happens then.”

Compatriot Byeonghun An, ranked 29th in the world, also took the defeat in his stride and is already looking forward to the next edition of the EurAsia Cup to exact some measure of revenge.

“This was probably the best experience I had in all my golf events. Unfortunately we lost, but you know, that’s what it is. I enjoyed it,” said An, who clinched a point for Asia in the opening day Fourball session with Thongchai.

“We had the desire to win. I think we are as good as them but luck wasn’t on our side this time. In two years’ time, maybe the tide will turn back to us,” added the 24-year-old, who was the European Tour Rookie of the Year in 2015.