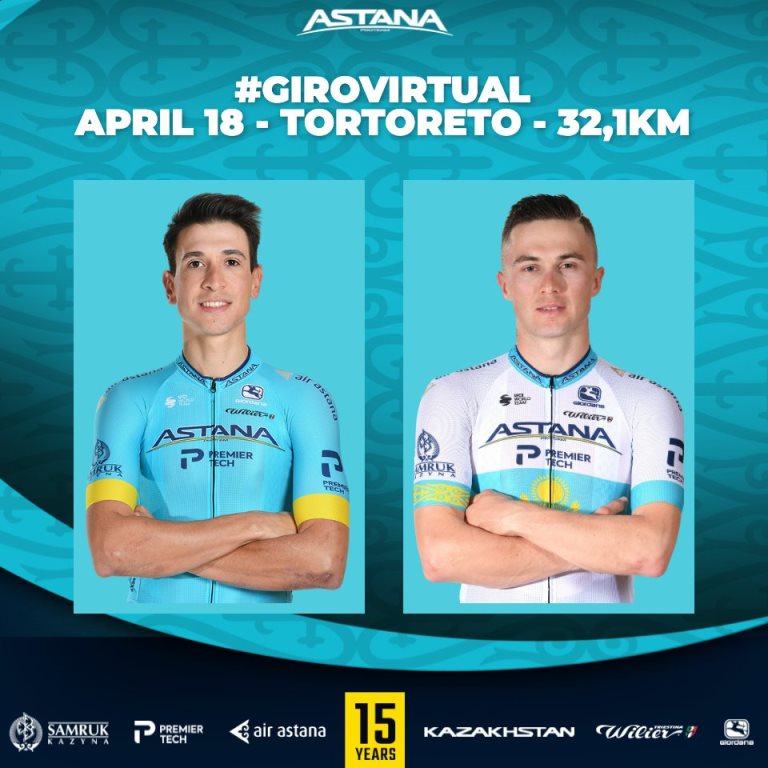 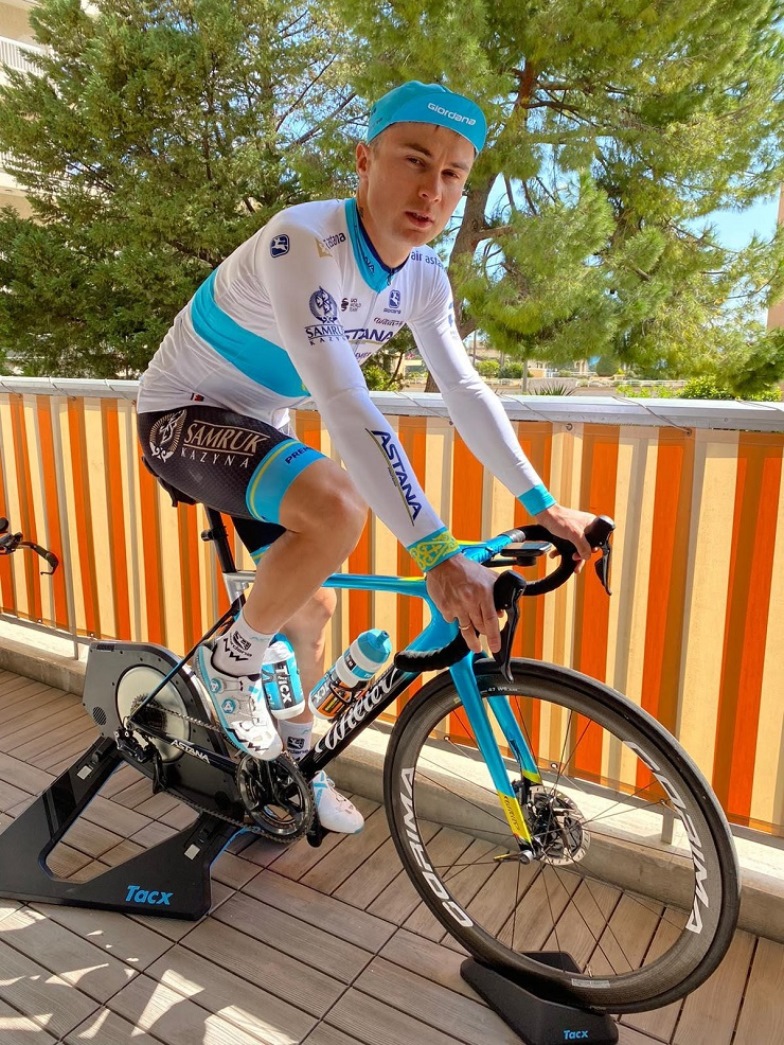 More than 4000 amateurs register to race so far

Astana Pro Team have won the first stage of the Giro d’Italia Virtual. The team’s two riders, Alexey Lutsenko (44’41”, best individual time of the stage) and Davide Martinelli, crossed the virtual finish line with a combined time of 1h35’04”, taking the race’s first Maglia Rosa. The Kazak team sits at the top of the General Classification with an advantage of 6’46” over the Italian national team (represented by Elia Viviani and Under 23 rider Samuele Zoccarato), and 9’40” over Team Bahrain-McLaren (Fred Wright and Grega Bole).

In the Pink Race, the General Classification is led by Trek-Segafredo (combined time of 2h10’04”), thanks to the performances of Elisa Longo Borghini (the stage’s fastest finisher at 1h01’02) and Lizzie Deignan. Trek-Segafredo finished 4’18” ahead of the Italian national team in second place (represented by Maria Giulia Confalonieri and Arianna Fidanza). Movistar Team Women is third at 11’03”.

Renato Di Rocco, President of the Italian Cycling Federation said: “It gives me great satisfaction to see cycling increasingly become such a source of inspiration and belonging for many. In these difficult times we’re all living in, the sport continues to rise up to the numerous challenges it faces, tackling them head on. The Giro d’Italia Virtual is another example of this. Launched by La Gazzetta dello Sport and RCS Sport after the success of the virtual Milano-Sanremo, it encapsulates the resilient spirit that truly distinguishes the cycling community. We should be proud of that. The participation of the Italian national team, be it the men, women or Under 23s, is another source of pride. It demonstrates a sense of community, present not only within the Italian team, but also within the wider sport as a whole. The riders, the staff, the fans, we’re all one team, now more than ever. As a team, we will succeed. We must all look forward to the day when the Giro may once again travel the length and breadth of an Italian nation reborn, showing it at its very best.”

Mauro Vegni, Giro d’Italia Director said: “While we wait to find out how and when our beloved race will return to Italy’s roads, we thought that the Giro d’Italia Virtual would make for an engaging experience for both riders and fans. We chose these seven stages, each varied in nature, to satisfy riders with different characteristics. The event has several diverse challenges, be it stage 10’s finish in Tortoreto, the rolling climbs of Nove Colli, the summit finishes of Madonna Di Campiglio and Sestriere (featuring over 1000 metres of elevation in its final 30km), or the the 15.7km Milan ITT, ridden in its entirety. It’ll be a real taste of the Corsa Rosa.”

European Road Race Champion Elia Viviani, riding today for the Italian national team, said: “This whole initiative really is great. At a time like this, it’s good to see the sport of cycling finding new ways to give something back to the fans while also raising funds for the Italian Red Cross. As an athlete, I’m more than happy to participate. It’s a genuine challenge for a rider as you’re pedalling an accurate simulation of climbs that truly do feel like the real thing. It’s an experience, I’d recommend it.”

INFO, RULES AND HOW TO REGISTER

To experience the excitement of the Giro d’Italia Virtual, riders will simply need a Garmin Connect account in order to sign up for free here. Following registration, they will then be able to upload the GPX files of the Giro d’Italia Virtual’s seven stages and install them on their Garmin Edge cycle computer. Riders will also require a new generation smart trainer such as those offered by Tacx, or any other brand of interactive smart trainer with similar features, to connect with their bike.

RCS Sport is promoting a fundraising initiative in aid of the Italian Red Cross, accepting donations via the Rete del Dono giving portal, available here. Donations made via the portal until 10 May will enable the humanitarian organisation to continue working at the front line of the Covid-19 emergency, offering first responder aid, virus screening and psychological and logistical support amongst other vitally important activities in the fight against the epidemic. The fundraising campaign has been made possible by Rete del Dono – a longstanding partner of RCS Sport and notable coordinator of numerous successful sporting charity programs, including the Milano Marathon and Gran Fondo Strade Bianche. In the last few weeks alone, Rete del Dono has activated more than 70 fundraising campaigns aimed at battling the Covid-19 emergency.

In addition to sponsoring the event, Castelli have also pledged to donate 5 euros to the Italian Red Cross for each #Giro102 Race Jersey purchased through their website.