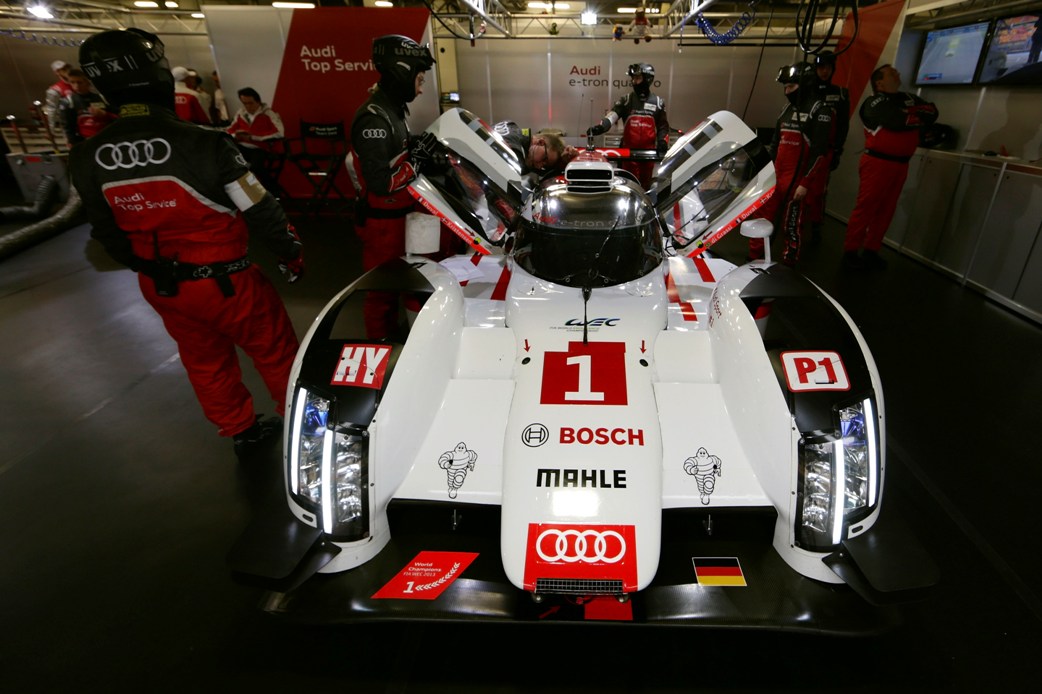 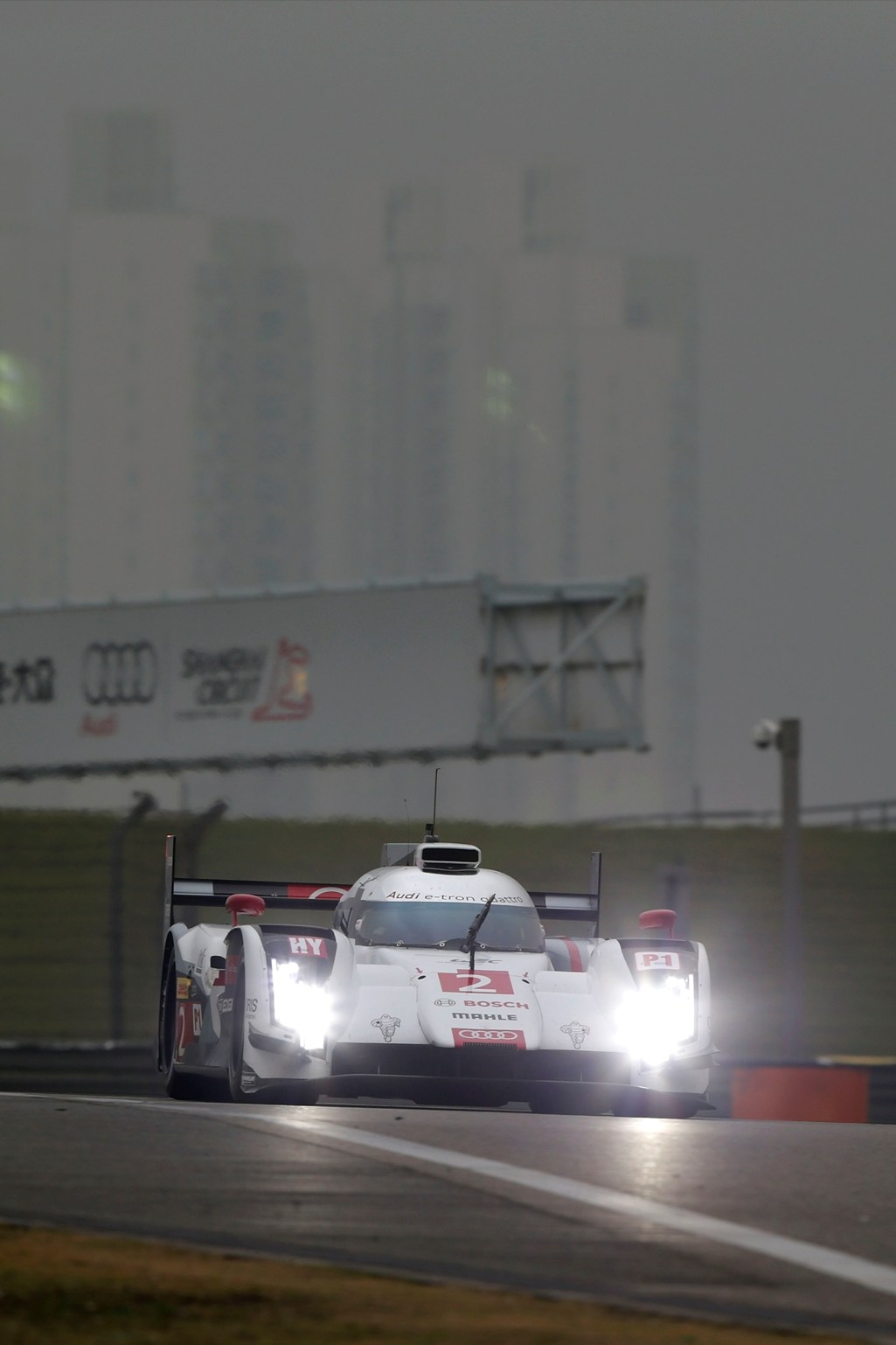 Audi took fifth and sixth place in qualifying for round six of the FIA World Endurance Championship (WEC). In the race, Audi ? currently the runner-up in the manufacturers? standings ? is aiming to make up positions with a consistently good performance throughout the six-hour race.

Audi has thoroughly prepared for round six of the season in three free practice and one qualifying sessions in China. The 5.451-kilometer track at Shanghai features very specific characteristics. While the various race car concepts are similarly fast in the first two sectors, the differences in the third sector are significant, as the tight turns do not suit the Audi R18 e-tron quattro. Consequently, the two Audi driver teams did not manage to get beyond the third row.

For Audi driver Loïc Duval (F), qualifying began with an unpleasant surprise. On the first lap, an opponent in an LMP2 race car hit the rear of the Audi R18 e-tron quattro. In spite of the incident, the driver of car number 1 achieved the best result within the team. The hybrid sports car from Ingolstadt and Neckarsulm set a lap time of 1m 49.454s, averaged from the four fastest laps, and will be starting the race from grid position five. Duval?s first lap was clocked at 1m 48.620s, the fastest achieved by an Audi driver. Remarkably, Duval managed to set the third-best time of all drivers in the first track sector and in the second the Frenchman was denied the fastest time by a mere 53 thousandths of a second.

Marcel Fässler/André Lotterer/Benoît Tréluyer, last year?s winners at Shanghai, achieved an average time of 1m 50.072s from their four fastest laps. They will be starting the race on Sunday 11.00 local time (4.00 CET) in sixth place. Audi Sport Team Joest is determined to again improve its positions through excellent pit stops, impeccable driving, a good stragegy and clever tire management in the race.

TV channel Eurosport will broadcast the last 90 minutes of the race live starting at 8.30 (CET). Fans can also watch the action on Facebook (AudiSport), Twitter (@Audi__Sport) and the news ticker (www.audi-motorsport.info) on the internet and on the Audi Sport App.

Dr. Wolfgang Ullrich (Head of Audi Motorsport): ?The track with its narrow corners and long straights doesn?t suit us well. We obviously expected a smaller gap to the leaders. But we?re lacking power for the long straights where we lose an extremely large amount of time. Unfortunately, there are no fast turns either where we can use the good downforce of our cars. Nevertheless, we?re hoping to have a chance of clearly improving our performance compared to the qualifying results through good work without any mistakes and consistent lap times.?

Chris Reinke (Head of LMP): ?It?s true that the third row today isn?t what we?d been wishing for but this is another weekend on which we?ve been heavily concentrating on preparing for the race. We are hoping to be able to make optimal use of all the factors to improve in the race tomorrow.?

Ralf Jüttner (Team Director Audi Sport Team Joest): ?It was a very close and interesting qualifying session with equal times set by the front runners. For us, unfortunately, only the third row was possible. In the first two sectors, the race cars of the three manufacturers are nearly equally fast but in the third sector we?re losing one and a half seconds, which we can?t regain anywhere else. However, across the race distance, we?re going to try and advance again with good tire management.?

Lucas di Grassi (Audi R18 e-tron quattro #1): ?A difficult qualifying session. On a single flying lap, we?re not good enough. But there?s no reason to mope. At Le Mans and at Austin, we had a similar starting base and then clearly improved in the race. We?ve got to keep a cool head on Sunday.?

Loïc Duval (Audi R18 e-tron quattro #1): ?It was a bit strange that an LMP2 car hit me in the rear on the first lap. Fortunately, our car wasn?t damaged. Since Austin, we?ve been struggling a bit with our competitiveness. Still, we?re pleased with our work in the number 1 Audi. We?ve got to wait and see how the tires are going to wear on Sunday. I think in that respect we may be a bit better than some of the others. I hope we can make up ground in the race.?

Tom Kristensen (Audi R18 e-tron quattro #1): ?It?s a great challenge to repeat last year?s success in the race on this unique track. It?s a race in which we?d like to achieve a good result. Our car was running really well on Friday in mixed weather conditions, while on a dry track today we were struggling a bit.?

Marcel Fässler (Audi R18 e-tron quattro #2): ?In qualifying, it was difficult to show the full potential that we?ll be able to make good use of particularly in the race. Our strength is that we?re more consistent over the long run. We?re not giving up. The result today was a slight dampener but in the race we?re going to give our all. Across six hours, quite a bit is possible.?

André Lotterer (Audi R18 e-tron quattro #2): ?This wasn?t the best result for us in qualifying. Our performance, compared to the competition, wasn?t good enough. On our part, we didn?t extract the best from the car either. On my second lap, I was having problems keeping my consumption in check. Benoît Tréluyer was hardly able to find a clear lap. That?s why our average times weren?t ideal. I hope tomorrow will be better and that we?ll be able to deliver a good race to the Chinese fans.?

Benoît Tréluyer (Audi R18 e-tron quattro #2): ?The situation here is similar to Fuji ? we?re not fast enough for the front positions. I pushed too hard in qualifying and didn?t drive a good lap. In the first trial, I didn?t optimally handle the last turn, in the second one I didn?t find a good beginning and on the last lap I hit traffic. I subsequently returned to the pits in order to save our last set of tires for the race. Now we?re going to concentrate on Sunday.?