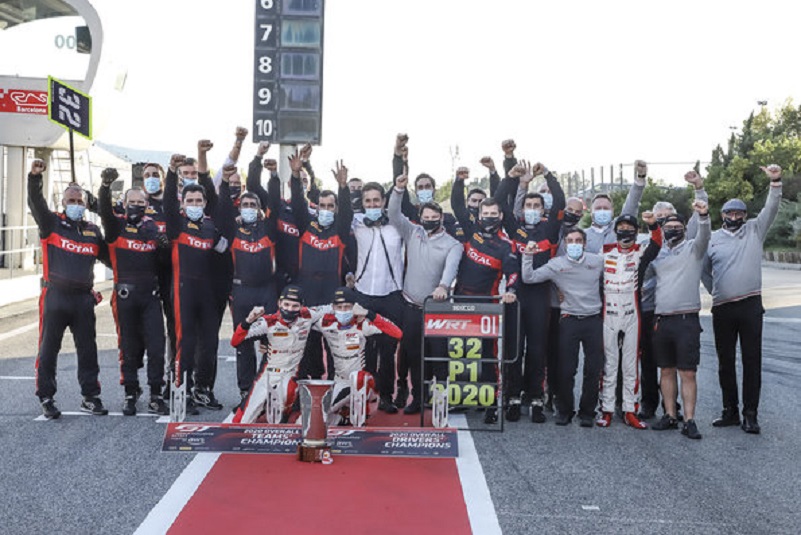 34 titles and 122 race wins with four types of cars

High degree of participation of Audi customers in compact season

“Congratulations and a big thank you to our customers around the world,” says Chris Reinke, Head of Audi Sport customer racing.

“The 2020 season faced us all with challenges like never before. Full of energy, our teams started a much-delayed season after the end of the lockdown and once again achieved remarkable results that add valuable successes to Audi Sport customer racing’s record.” In 478 races around the globe, the customers clinched 361 podium positions in 1,285 individual appearances, including 122 victories. In the championship classifications, the customers celebrated twelve drivers’ titles and 22 additional classification victories with their drivers.

In the GT3 class, the Audi R8 LMS prevailed in the battle for first place 48 times in 151 races and clinched a total of 139 podium places. This means that the brand with the four rings has won almost every third race in this internationally fiercely contested league. Statistically, there was at least one podium finish in almost every competition – the rate here is around 92 percent.

With seven drivers’ titles won, including the success of Belgian Audi Club Team WRT with Dries Vanthoor/Charles Weerts in the prestigious GT World Challenge Europe Sprint Cup, and eight other championship decisions in its favor, the Audi R8 LMS remains on course for victory.

The Audi R8 LMS GT4 was even more successful than a year ago. Its win rate increased from 18.5 to 22 percent. The success in GT4 France, contested by around 30 participants, is particularly remarkable. In this most fiercely contested national GT4 racing series, Audi is strongly represented by its private teams with up to seven R8 LMS GT4 cars. Long-time customer Saintéloc Racing secured the Pro-Am classification for the third time in a row with Gregory Guilvert/Fabien Michal.

It was the first time in the 24-year history of the FFSA GT Championship that a driver pairing managed such an uninterrupted run of success.

In its fourth season, the TCR touring car from the Audi Sport customer racing program was also a guarantee for success. For the first time, the Audi RS 3 LMS won titles at world level, at European level, in Germany and in New Zealand. In the FIA WTCR as the most high-profile TCR racing series, Comtoyou Racing with Gilles Magnus prevailed in the rookie classification.

The same team from Belgium also clinched the drivers’ title in TCR Europe with Mehdi Bennani, as well as the team classification and the rookie category with Nicolas Baert. In the Nürburgring Langstrecken-Serie, customer team Bonk Motorsport was at the front of the field for the first time in the SP3T class with Hermann Bock, while Track Tec Racing won two classes in endurance racing in New Zealand.

In Japan, one of two sprint titles also went to an Audi customer team for the first time after the endurance title last year. TCR Japan has separate championship classifications for the Saturday and Sunday races. Takuro Shinohara secured the Saturday Series title early with Audi Team Hitotsuyama. The Japanese is also in first place in the Sunday Series before the finale. The drivers’ titles of Zachary Vanier in Canada and Nicolas Baert in the TCR Benelux complete the tally.

As last year, the entry-level touring car also leads the number of all races in the comparison of the Audi Sport customer racing products. The customers took part in 219 individual competitions with their cars in 529 individual starts, winning 49 of them and standing on the podium a total of 159 times.

“We are also particularly proud of three 24-hour race successes achieved by our customers on their own initiative,” said Chris Reinke.

Tom Boonen/Gilles Magnus/Stéphane Perrin/Vincent Radermecker/Matthew Taskinen were the winners of the TCR class of the Dubai 24 Hours. They shared an Audi RS 3 LMS from AC Motorsport. It was the model’s second victory in this competition after 2017.

For the third time in a row, a customer team with the RS 3 LMS also held an unassailable lead in the TCR class of the Fuji 24 Hours: This time, Waimarama Kizuna Racing was fastest in the Super Taikyu Series opener with its driver team Katsumasa Chiyo/Kizuna/Riki Okusa/Naoya Yamano/Hironobu Yasuda/Toshihiro Yoshida. At the Nürburgring 24 Hours, the Giti Tire Motorsport by WS Racing team came out on top in the SP8 class. Kristian Jepsen/Kari-Pekka Laaksonen/Jan Sorensen/Roland Waschkau achieved success in the Audi R8 LMS GT4.

Successes in two intra-brand competitions round off the tally. Australian Daniel Bilski was the best of 41 drivers competing in the new Audi Sport Asia Trophy for drivers with FIA Bronze rating in the Asian region.

In the third season of the Audi Sport Seyffarth R8 LMS Cup held in the European region, Tim Reiter prevailed for the first time in the sporting competition with 23 other drivers.- audi mediacenter