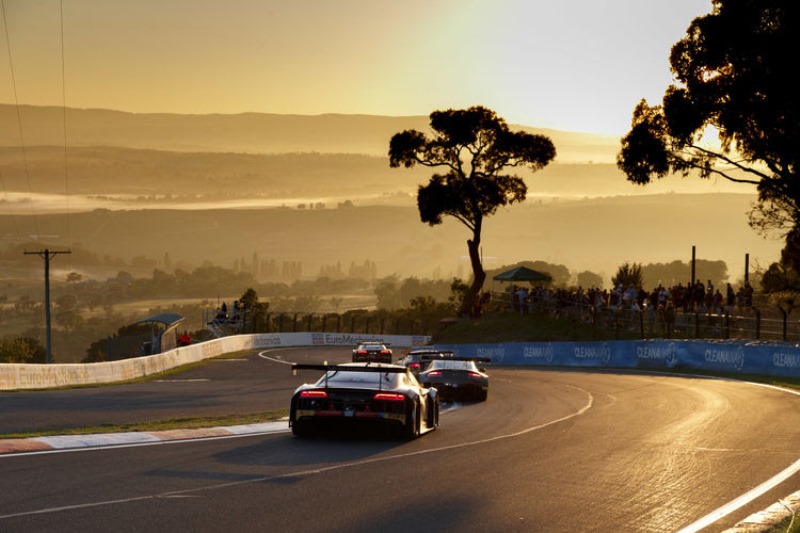 Five Audi R8 LMS on the grid of 12-hour race

For the first time, Audi Sport Team Valvoline is tackling the most important endurance race in Australia with three Audi R8 LMS. At the opening event of the Intercontinental GT Challenge (IGTC), the only worldwide GT3 racing series, eight Audi Sport drivers will be on the grid together with Australian pro Garth Tander.

Following five IGTC title successes since 2016, Audi Sport, as the so far most successful brand in this racing series, will again attack with full force from January 31st to February 2nd. The race in Australia marks the first of five championship rounds spread across five continents.

The Audi R8 LMS will be racing for the tenth time in the iconic 12-hour event at legendary Mount Panorama, 200 kilometers west of Sydney. “Our tenth appearance at Bathurst marks a very special occasion. In 2011, 2012 and 2018, we won there with three different teams. Now we’re aiming for our fourth success with Audi Sport Team Valvoline,” says Chris Reinke, Head of Audi Sport customer racing.

Belgian Audi Sport drivers Dries Vanthoor and Frédéric Vervisch – both of them last year’s winners of the Nürburgring 24 Hours and the Suzuka 10 Hours – will be sharing a cockpit with their Audi Sport colleague Christopher Haase. The German has previously won the 24-hour races at the Nürburgring, at Spa and in Dubai.

However, a victory at Bathurst is still missing on Haase’s track record, whereas Vanthoor was unbeatable there in 2018. Kelvin van der Linde from South Africa and the German Markus Winkelhock – also previous winners of the Nürburgring 24 Hours – will be driving a second Audi R8 LMS together with their fellow Audi Sport driver Mattia Drudi.

The 21-year-old Italian will be debuting in Australia just like his compatriot Mirko Bortolotti, who is part of Audi Sport’s driver lineup for the first time this year. Bortolotti is sharing a third Audi R8 LMS with Audi Sport driver Christopher Mies and Australian Garth Tander. Mies will be the most experienced as well as the most successful Audi Sport driver at Bathurst: He was one of the first contenders when GT3 race cars were admitted to this 12-hour race for the first time.

On making his debut in 2011, as well as a year later, Mies won the endurance competition with Audi. In addition, as Australian GT Champion of the 2015 season, he has strong ties to the fifth continent. Australian pro Garth Tander will be on the Bathurst grid with Audi for the fifth consecutive time, and last year scored his first title win on home soil – the Australian Endurance Championship – with the German GT3 sports car. As a three-time winner of the famous 1,000-kilometer touring car race, Tander celebrated some of his sweetest successes on this challenging circuit.

The Melbourne Performance Centre is preparing all three Audi R8 LMS cars for Audi Sport Team Valvoline. Two race cars fielded by local teams are complementing the brand’s lineup. Competing again in the Pro-Am class at Bathurst will be Audi Sport’s long-standing customer team Hallmarc that scored podium finishes in its class in 2017 and 2019, while Tony Bates Racing will be competing there in the Silver Class with Audi for the first time.